Joy Overbeck
|
Posted: Feb 14, 2016 12:01 AM
Share   Tweet
The opinions expressed by columnists are their own and do not necessarily represent the views of Townhall.com. 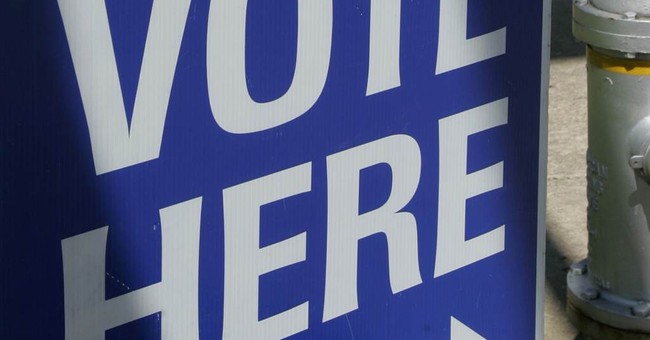 Many Christians are convinced that being “political,” or even voting, somehow violates their religious faith. They think Christians should be ”in the world, but not of it” abstaining from earthly messes like government and instead keep their eyes on the sky, patiently awaiting Christ’s return that will fix everything. Lucky for us, the Founders, virtually all of whom were Christians steeped in the Bible since school days, never bought that view, or they wouldn’t have started the revolution against King George that gave us our great nation. And we would all be British.

Four times in the Declaration of Independence the Christian God is credited as author of the values and rights on which America was founded and his protection invoked.  It is way past time to rise up and revive those values.  This election, Christians who are sick and tired of government’s chokehold, sick and tired of God’s man-woman marriage being mocked and branded homophobic, sick and tired of the moral rot in which our society is wallowing, must come out and vote against it.

The only way to stop the relentless zombie march of the God-challenged secularists against believers is by voting for leaders from school board to president who pledge to tirelessly defend the original Christian morals of this country and have actually done so, not merely waved their mom’s Bible from a staged rally.

Everywhere, an all-powerful “culture” and arrogant government are shredding the Bible as well as the Constitution. The immorality that God warns us against rampages across the society from a young woman seen by millions mimicking sex onstage, to the vile woman-hating lyrics of the songs our kids constantly have plugged into their ears, to the celebration of aberrant “marriage” that the Supreme Court declares normal, overturning the will of millions in 30-plus states. After the Supreme Court justices trashed God’s law, the White House--in gleeful party mode--lit up the rainbow colors of the same-sex marriage lobby, deliberately insulting the faithful in this Christian-majority nation.

Humans created by God in his own image are reduced to body parts and a non-profit that pretends to be a woman’s health provider dismembers babies in the womb for profit. And this outrage is funded by we the taxpayers. Television is a slaughterhouse of rape, mutilation,  murder and dissection of human beings as if they were so much hamburger. The victims are nearly all women. The most-searched topic on the Internet is pornography which horrifically abuses women, men, and even young children while destroying marriages and families.

“Sex education” starting in grade school is convincing our kids that the same-sex affection so typical in the pre-teen years means they will be homosexuals for life, while gays are really only 3 or 4 percent of the population.

Our citizens are increasingly addicted to drugs and other peoples’ money. Fully half of the population takes government support in the form of housing, food stamps, or other types of welfare. Half of the population also pays no federal income tax. The socialist worldview – taking from those who earn their income by working, and giving to those who don’t – is a page ripped  from the fevered Communist brain of Karl Marx who in 1875 decreed, “from each according to his ability; to each according to his need.” Now, after over 140 years of disastrous failures that have killed about 120 million of their own people (Hitler, Stalin, Mao, etc.) this lethal atrocity is being resuscitated like the living dead.

Our nation has always provided the truly needy a generous safety net as it should, but in the last seven years the safety net has morphed into a feather bed. The “social gospel” preached by liberals actually contradicts the real Gospel. The Apostle Paul warned, “… if anyone is not willing to work, let him not eat. For we hear that some among you walk in idleness, not busy at work…such persons we command and encourage in the Lord Jesus Christ to do their work quietly and to earn their own living.”  2 Thess. 3:10-12. God knew what great human satisfaction comes from work, and so he gifted us each with talents and abilities so we would find fulfillment using our God-given skills.

But the idea of “income redistribution” in the name of “equality” defies God’s plan for earning our own way. Taking from others is really a government-driven form of stealing, forbidden by the Bible’s Eighth Commandment. Its evil twin, coveting whatever your neighbor has, is banned by the Tenth Commandment yet promoted by this government as class warfare. Our 20 trillion dollar debt is an even more deeply troubling form of theft, stealing from our own children and grandchildren.

This is why the big-government juggernaut is a hugely destructive immoral force that must be defeated. It steals our children’s futures, and even takes possession of our bodies, erasing our freedom to make our own medical decisions. It hunts down Christian dissenters from its perverse orthodoxy, compassionate groups like Little Sisters of the poor, or a Christian cake baker who declines to participate in a same-sex wedding; even pastors who refuse to marry “couples” of identical gender. In these and hundreds of other ways, it denies us as Christians the “free exercise “of our religion promised in the First Amendment.

When evangelical Christians vote, they overwhelmingly vote Republican because the GOP’s freedom ideology is more aligned with their belief system than the Democrats. And those who don’t vote are, by their absence, unwittingly voting for the other side.

It’s been estimated that about four million Christians who had voted for George Bush stayed home in 2014 rather than support Romney. Significantly, according to the Census Bureau, of the 220 million eligible voters (registered and not registered) nearly 60 percent didn’t vote. If even half of those 132 million voted for leaders with Christian values (and 70 to 75 percent of citizens proclaim they’re Christians) that would mean 66 million new Christian voters!

Such an outpouring would dramatically change our wayward nation into one that again reveres and practices the moral principles that God has set for us. Evangelist Franklin Graham, who leads Samaritan’s Purse, the charity helping desperate Christians and non-Christians alike world-wide, says, “If we turn our nation back to God, I believe that God will help us fix the problems that we face.”

Accordingly he is visiting each state with his Decision America prayer rally. “I’m going to every state to challenge Christians to live out their faith at home, in public and at the ballot box – and I will share the Gospel,” he says. “I want the evangelical Christians, the Bible-believing Christians to stand up and vote.”

Although as Christians we know God is in control, our faith can’t be an excuse not to vote. Would our God want us to idly watch as the nation he so favored is demolished, or would he want us to choose leaders who uphold the standards he has put so lovingly in place for us?