Will Russia Back the Democrats in 2018 Midterms?

Jonah Goldberg
|
Posted: Aug 01, 2018 12:01 AM
Share   Tweet
The opinions expressed by columnists are their own and do not necessarily represent the views of Townhall.com. 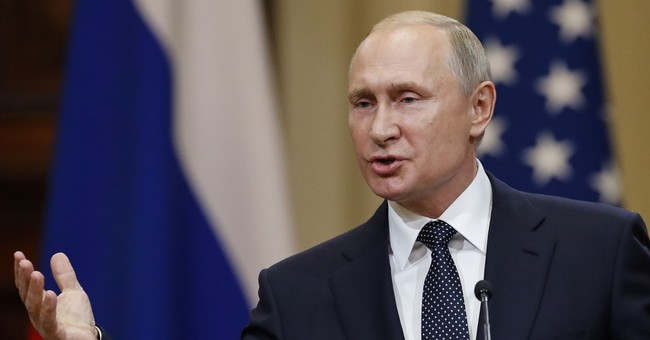 "I'm very concerned that Russia will be fighting very hard to have an impact on the upcoming Election," President Trump tweeted last week. "Based on the fact that no President has been tougher on Russia than me, they will be pushing very hard for the Democrats. They definitely don't want Trump!"

The president does have a point, though. Two points, actually.

First, Trump has been tougher on Russia than many of his detractors will allow. No, he hasn't been tougher than any president in American history, but such exaggerations are a hallmark of his rhetoric. (He isn't the most popular president among Republicans ever, nor is this the best economy ever.)

Second, it would be rational for the Kremlin to favor Democrats in the midterms -- though not because they're soft on Russia.

Although there are many theories for why Russian President Vladimir Putin put his thumb on the scales in favor of Trump in the 2016 election, the rough consensus among national security types goes something like this: We know Russia is interested in sowing discord across the West. That's why it mucks about in almost everyone's elections. It's also why it funnels support to various nativist, populist and nationalist groups throughout Europe. Like pretty much everyone else, the Russians didn't expect Trump to win, but they figured he could damage the Hillary Clinton presidency before it started. And they bet that if Trump lost, his inevitable claims that the election was rigged or stolen from him would be a strategic bonanza.

Here's the thing. If Russia wants to stay true to its original strategy of fueling the dumpster fire that is American politics right now, it very well might want the Democrats to take back Congress.

Many "normal" administrations have been crippled after getting shellacked in their first midterm elections. That's because the incoming party, which ran against the incumbent president and his policies, believes that it has a mandate to investigate and check the party in the White House. Andrew Johnson was impeached in large part because the Radical Republicans boosted their numbers in the 40th Congress.

If the Democrats take back the House in November, which looks increasingly likely, many of them will pursue impeachment. Even if that goes nowhere -- which is also likely, given what we know now and the fact you need two-thirds of the Senate to remove a president -- the Democratic-run oversight committees will gain subpoena power and the ability to compel testimony. If you think the White House is lawyering up now, just wait.

It's hard to game out what the spectacle would look like, but it would surely be a spectacle. Perhaps Trump would insist that the midterms were rigged, even blame the Russians for the rebuke. His legislative agenda would certainly be dead.

With no chance of getting legislation through the Senate and the president's veto, the Democrats would turn to intrusive investigations of proctological proportions.

A riot of hypocrisy would also unfold, as Republicans who once insisted that the White House must provide whatever documents Congress wants would suddenly discover the merits of executive privilege, while Democrats would start to sound like the Freedom Caucus threatening to impeach officials who did not comply with their demands.

Meanwhile, the fight over the speakership would be a glorious exercise in dysfunction. (Many Democrats have said they would refuse to vote for Rep. Nancy Pelosi.) And let's not forget all of the inevitable posturing from Democrats seeking the 2020 nomination.

I'm not predicting the Russians will -- or can -- do anything significant to affect the midterms. Nor am I arguing that people should vote for the Democrats. Indeed, the prospect of such a crazy 2019 might be an argument for Trump-skeptical but drama-weary and impeachment-wary Republicans to vote to keep the GOP in control.

My argument is that if the Russians want our political climate to get yet more unhealthy, they could do worse than switching sides this time around.