Jonah Goldberg
|
Posted: May 11, 2018 12:01 AM
Share   Tweet
The opinions expressed by columnists are their own and do not necessarily represent the views of Townhall.com. 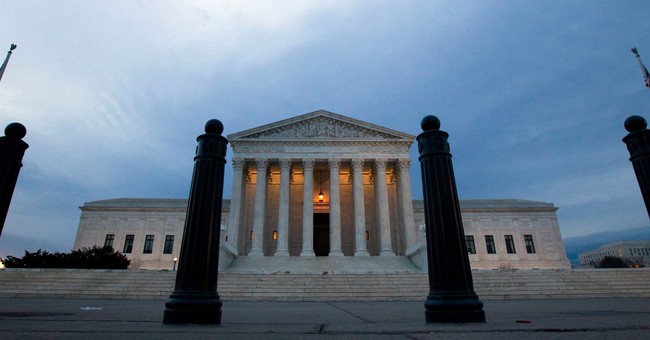 During almost every Supreme Court nomination battle, I try to make the same point: These fights wouldn't be nearly so ugly if we didn't invest so much power in the Supreme Court it shouldn't have in the first place.

Until the Robert Bork nomination in 1987, Supreme Court fights were remarkably staid affairs. But by the late '80s, the court had become a bulwark for all sorts of policies and laws that should rightly be in the portfolio of the legislative or executive branch, or, better, left to the various states. As a result, on any number of issues -- most conspicuously abortion policy -- the court became more important than the presidency or Congress. No wonder fights over Supreme Court appointments started to look more and more like political campaigns than debates over the finer points of judicial philosophy.

Why bring this up now, when there's no Supreme Court fight at the moment? Because the power we invest in the court doesn't warp and bend our politics solely during confirmation battles.

"One of the things Trump has decided is that he is going to give the court to the base of the party," CNN legal analyst Jeffrey Toobin told an audience at the University of Chicago's Institute of Politics this week. "Donald Trump can have sex with Stormy Daniels from now until the end of time and the evangelicals will stick with him because of the courts."

This could use a bit more nuance. But it is certainly true that if Trump didn't appoint conservatives to the Supreme Court he would lose a lot of support on the right.

I have done more than my share of criticizing members of my ideological tribe for abandoning many of the arguments they made about the importance of good character and morality in political leaders, so I am happy to stipulate that this "bargain" is shot through with hypocrisy. But perhaps liberals could take a few moments to reflect on why conservatives think such transactionalism is justified.

It's reasonable to assume that if the court had stuck to its traditional role and not become a parallel legislative branch, this grand bargain with President Trump would feel less imperative.

In my debates with liberals about my new book, "Suicide of the West," one of the biggest complaints I get is over the idea that Trump was elected in large part as a backlash against the excesses of liberals. "We didn't elect the guy, so we did nothing wrong."

But that's not how politics works. Barack Obama was elected as a backlash against George W. Bush's presidency, specifically the Iraq War. Bush in turn was elected in no small part because he promised to end the tawdriness of the scandal-ridden Clinton era. And so on. Politics has always been dialectical in this fashion.

The backlash that propelled Trump to the White House was by no means solely about the Supreme Court. Progressivism's investment in identity politics, its lunge leftward on immigration and the Democrats' insistence on reinstating the Clinton political dynasty played important roles too.

But my point about the court still stands. It's doubtful Trump could have galvanized the support of conservatives if he hadn't promised to hand over the nomination process to the Federalist Society. (And let me be clear: I'm glad he did.)

The founders' chief concern when writing the Constitution was to prevent the concentration of unchecked power in any branch of government or faction, because they understood that concentrated power was inherently threatening to liberty, no matter who wielded it. That's the whole point of checks and balances; every player on the board has a vested interest in not letting a rival player get too powerful.

Since the beginning of the 20th century, progressives have repeatedly tried to invest as much power as possible in whatever branch of government they controlled at the moment. And every time, they dismissed concerns about what might happen when their opponents grabbed control of that institution. Liberals cheered, for instance, when President Obama ruled like a monarch via executive orders with his "pen and phone."

Now, they get to watch as President Trump erases Obama's work (the Iran deal, the Paris climate accord, etc.). I shudder to think what liberals will do if they replay the same gambit when the inevitable Trump backlash comes.