Trump Not Solely to Blame for Violence at his Rallies

Jonah Goldberg
|
Posted: Mar 16, 2016 12:01 AM
Share   Tweet
The opinions expressed by columnists are their own and do not necessarily represent the views of Townhall.com. 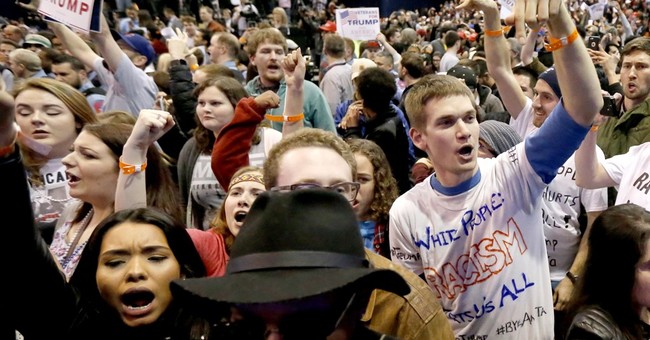 For the last few days the burning question among pundits has been: "How much blame does Donald Trump deserve for the violence at his rallies?" It's a fair question, and the obvious answer is: a lot.

On Sunday, the demagogue paid his usual lip service to social norms, rejecting "violence in any shape." He then proceeded to say -- again -- that he's willing to pay the legal fees of those who commit violence on his behalf. He routinely waxes nostalgic for the good old days when troublemakers were "carried out on stretchers."

That said, there was a good deal of Kabuki to the recent chaos in Chicago.

The Trump campaign said it had to cancel its event there because the police were concerned about public safety. That's a lie. The Chicago Police Department insists the decision was Trump's -- as was the choice to stage a rally in an area of Chicago where the campaign knew protesters would swarm.

Of course, protesters were only too happy to play the role Team Trump expected them to play. Whether they were Bernie Sanders campaign pawns, as the chants of "Bern-ie! Bern-ie!" would suggest, or puppets of MoveOn.org, or self-starting rebels matters little. What they wanted, as the hashtag campaign #ShutItDown suggests, was to suppress free speech.

That makes them doubly blameworthy: Their goal was dishonorable, and their tactics only helped burnish Trump's bogus self-image as the brave-yet-victimized anti-PC warrior.

Such high-ratings spectacles only magnify the sense that politics is a contest of will, not arguments. As the commentator Jonathan Chait writes, "the whole premise of democracy is that rules need to be applied in every case without regard to the merit of the underlying cause to which it is attached." If you think it's acceptable to shut down Trump's rallies, you have no grounds to complain when Trump's supporters shut down Sanders' rallies.

The real problem with the question, "How much blame does Trump deserve?" -- or, for that matter, "How much blame does Sanders deserve?" -- is that such questions assume blame is a limited commodity. If we say Trump deserves a lot of blame, the implication is that there's only a little left for everyone else. The reality is that there's plenty to go around. We are all adrift in an ocean of blameworthiness.

Chicago was a fleeting scene in a very long-running play. The Spanish philosopher Jose Ortega y Gasset defined barbarism as the lack of universal ideals to which all can subscribe. The war on free speech is really just a battle in the larger war on universal standards.

When leaders claim the system is irredeemably corrupt and the rules rigged against them, politics becomes a kind of barbarism. What is good for my team is right, and whatever is good for your team is wrong.

Trump is merely the latest actor to deliver such assurances to his coddled constituencies. Barack Obama -- who recently absolved himself of all blame for the state of politics in the nation he's led for seven years -- has played this game with more finesse than most, but that's the thing about the great ones: They make it look so easy. Obviously, he hasn't encouraged violence -- that is Trump's special contribution to the degradation of our politics. But from his contemptuous rhetoric for his political opponents to his unilateral disregard for constitutional restraints, Obama has helped fuel distrust and discord in ways his fans can't or won't see.

Sanders lighted his populist fire by insisting the country is held hostage by malefactors of great wealth who are exempt from the rules that bind the rest of us. Hillary Clinton, who got rich(er) giving hidden speeches to those very same malefactors, is not trusted by the voters because she seems to think the rules are for other people, at least when it comes to handling classified materials.

The truth is that politics is downstream of culture. And all of these politicians, Trump included, reflect deeper tendencies. Identity politics on the left and the right -- from the war on so-called white supremacy to the bitterness of the white backlash -- amount to what the French philosopher Julien Benda described as the "intellectual organization of political hatreds." What's remarkable about the violence Trump encourages isn't its sudden appearance. It's that it took this long.