No Superheroes In 'The Interview' Capitulation 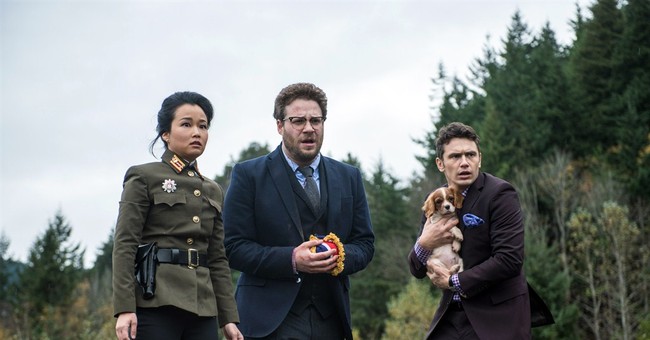 The first issue of Captain America came out on December 20, 1940. It shows Cap slugging Adolph Hitler in the mouth.

Good stuff, but note the date. America wouldn't enter World War II for about another year. At the time, many Americans wanted to stay out of another European war. And here was an American superhero punching the leader of a sovereign nation in the kisser. Subsequent issues kept pitting Captain America against Hitler and his goons.

The angriest reaction came from the German American Bund, Hitler's stooges in the U.S. They harassed Jack Kirby and Joe Simon, the creators of Captain America, with hate mail and telephoned death threats.

"The theme was 'death to the Jews,'" Simon wrote in his memoir. "At first we were inclined to laugh off their threats, but then, people in the office reported seeing menacing-looking groups of strange men in front of the building on 42nd Street and some of the employees were fearful of leaving the office for lunch."

Simon called the cops, and as soon as the police showed up, the phone rang. Mayor Fiorello La Guardia wanted to speak to the creators of Captain America. Simon got on the line. "You boys over there are doing a good job," the voice squeaked, "The city of New York will see that no harm will come to you.'"

That is how it's supposed to work in a democracy.

Unfortunately, America decided to go a different way with the movie "The Interview," a reportedly lowbrow comedy about two low-rent TV guys asked to use their interview with North Korean dictator Kim Jong Un as an assassination opportunity.

Computer hackers going by the name "Guardians of the Peace," but clearly henchmen for the North Korean regime, attacked Sony Pictures Entertainment, spilling the company's internal emails, payroll data and even scripts and rough cuts of some yet-to-be-released movies onto the Internet.

Then they posted a warning:

Soon all the world will see what an awful movie Sony Pictures Entertainment has made.

The world will be full of fear.

We recommend you to keep yourself distant from the places at that time.

(If your house is nearby, you'd better leave.)

New York Mayor Bill de Blasio didn't call the management of Landmark Theaters in New York, where Sony Pictures was slated to premiere "The Interview," and say, "The city of New York will see that no harm will come to you." He didn't say much of anything at all.

President Obama did eventually say the public should "go to the movies," but that's about it. This at least is progress for an administration whose first response to a terrorist attack in Benghazi, Libya, was to blame an American-made video and, with much fanfare, throw its creator in jail.

During the first Gulf War, when Saddam Hussein was raining scud missiles on Israel, the Israelis refused to bend, even though they reasonably feared the missiles were tipped with nerve gas. A long-planned symphony concert went ahead as scheduled. The only accommodation they made to the assault: Everyone in the audience wore gas masks. (ABC News cast this heroic defiance in anti-Semitic terms, reporting that the concertgoers were determined to get their money's worth.)

Those were credible threats, and democratic leaders stood firm.

In America, when faced with less credible threats, we flew the white flag.

A theater chain caved. The movie studio caved. As of now, "The Interview" will never be theatrically released. In theory, Sony could release it online, via on-demand and streaming channels.

The only problem: At least one cable company preemptively surrendered to North Korean intimidation, too, reportedly saying it would not air the film. Now, even if Sony had a backbone transplant, it couldn't release the movie.

Sony could still dump it on the Internet and let it spread virally. It would lose ticket sales, but the company would strike a defiant blow nonetheless.

Don't hold your breath. Sony would rather go the way of appeasement. And so would everyone else, it seems.

It's fine to say Sony never should have green-lighted the movie in the first place. That's true of so much that Hollywood produces. The point is it did. And America is effectively giving one of the most evil regimes in human history a veto on our First Amendment. Where's Captain America when you need him?