What Principles Rule the GOP? 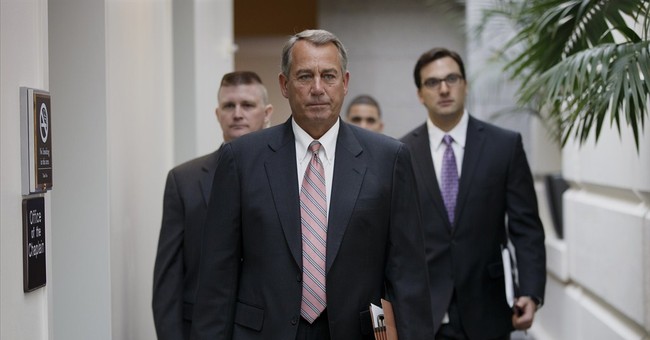 For years, Republicans benefited from economic growth. So did pretty much everyone else, of course. But I have something specific in mind. Politically, when the economy is booming -- or merely improving at a satisfactory clip -- the distinction between being pro-business and pro-market is blurry. The distinction is also fuzzy when the economy is shrinking or imploding.

But when the economy is simply limping along -- not good, not disastrous -- like it is now, the line is easier to see. And GOP politicians typically don't want to admit they see it.

Just to clarify, the difference between being pro-business and pro-market is categorical. A politician who is a "friend of business" is exactly that, a guy who does favors for his friends. A politician who is pro-market is a referee who will refuse to help protect his friends (or anyone else) from competition unless the competitors have broken the rules. The friend of business supports industry-specific or even business-specific loans, grants, tariffs or tax breaks. The pro-market referee opposes special treatment for anyone.

Politically, the reason the lines get blurry in good times and bad is that in a boom, the economic pie is growing fast enough that the friend and his competitor alike can prosper. In bad times, when politicians are desperate to get the economy going, no one in Washington wants to seem like an enemy of the "job creators."

But in a time when people bitterly wonder, "Is this as good as it gets?" Republicans have to decide whether European-level growth means we should have European-style policies. In Europe, big corporations are national institutions where big labor unions collect their dues -- with help from the state.

Democrats, who often look longingly at the way they do things across the pond, don't have the same dilemma as Republicans. For a century or more, progressives have believed in public-private partnerships, industrial policy, "Swopism," corporatism and other forms of picking winners and losers. The winners always promise to deliver the "jobs of tomorrow" in return for help from government today. (Solyndra is running behind on keeping its end of the deal.)

Many Republicans are rhetorically against this sort of thing, but in practice, they're for it. (Even Ronald Reagan supported trade protections for Harley-Davidson.) This is especially true at the state level, where GOP governors are willing to do anything to seduce businesses their way. Texas is a good example. Gov. Rick Perry has been heroic in keeping taxes and regulatory burdens low. But he's also helped his friends -- a lot. Few on the right in Texas care, because Texas has been doing so much better than the rest of the country.

GOP politicians can't have it both ways anymore. An economic system that simply doles out favors to established stakeholders becomes less dynamic and makes job growth less likely. (Most jobs are created by new businesses.) Politically, the longer we're in a "new normal" of lousy growth, the more the focus of politics turns to wealth redistribution. That's bad for the country and just awful politics for Republicans. In that environment, being the party of less -- less entitlement spending, less redistribution -- is a losing proposition.

Also, for the first time in years, there's an organized -- or mostly organized -- grassroots constituency for the market. Historically, the advantage of the pro-business crowd is that its members pick up the phone and call when politicians shaft them. The market, meanwhile, was like a bad Jewish son; it never called and never wrote. Now, there's an infrastructure of Tea Party-affiliated and other free-market groups forcing Republicans to stop fudging.

A big test will be on the Export-Import Bank, which is up for reauthorization this year. A bank in name only, the taxpayer-backed agency rewards big businesses in the name of maximizing exports that often don't need the help (hence its nickname, "Boeing's Bank"). In 2008, even then-Sen. Barack Obama said it was "little more than a fund for corporate welfare." The bank, however, has thrived on Obama's watch. It's even subsidizing the sale of private jets. Remember when Obama hated tax breaks for corporate jets?

Friends of the Ex-Im Bank are screaming bloody murder. That's nothing new. What is new is that the free market is on line two.