Are Brad Paisley and Rand Paul the bravest men in America? 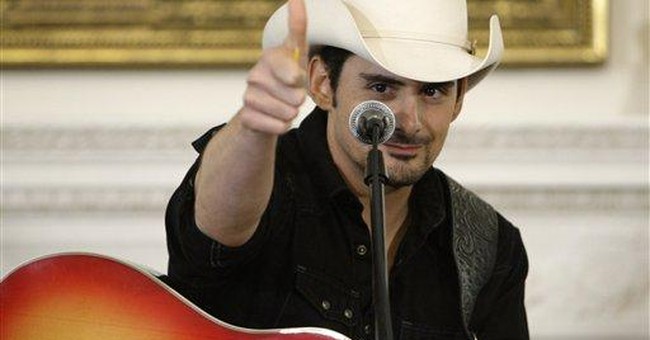 Er, no. At least not by my lights. But maybe the country singer and the first-term senator are contenders for that title according to the attorney general of the United States, Eric Holder.

In 2009, Holder famously declared in a speech that America is a "nation of cowards" because it refuses to talk about race "enough." What constitutes enough race talk in our private time seems like a hard thing to quantify, and I'm not sure Holder has any idea how to do it either.

Holder was hardly the first, nor will he be the last, liberal to call for a national conversation on race. It is one of the mossiest locutions in modern America. I sincerely doubt an hour goes by where the phrase or something similar -- "frank dialogue," "much-needed discourse," etc. -- isn't uttered or written by some editorialist, college professor or television host.

Though often ridiculous and hackneyed, this isn't necessarily a sinister or mercenary thing. It's only natural that activists, academics and consultants would want a "national conversation" on their specialty issue or cause. If your passion, principles and profits align so that you make a living from talking about race, why wouldn't you want to increase demand for your wares?

I doubt there are any activists out there who wouldn't dearly love to have their issue -- adoption, literacy, animal cruelty, mopery, whatever -- be turned into a "national conversation," never mind turned into a required topic in curricula from K through Ph.D.

Less defensible is when calls for a national conversation amount to a trap. It's a predictable pattern. Some poor dupe thinks people are serious about all this frank-dialogue talk. He sticks his head up to say something frank and quickly finds it separated from his shoulders.

Which brings us first to Mr. Paisley. He's released a song titled "Accidental Racist," and it has attracted an enormous amount of scorn. I can't really second-guess the music critics. It is not a great song from what I can tell. Though is it really the "worst song ever," as several critics have said? It seems to me that "Who Put the Bomp (In the Bomp, Bomp, Bomp)" is catchier but substantively less redeeming.

Which is to say that Paisley -- with an accompaniment from legendary rapper LL Cool J -- is striving for something important. The song is a ballad about a white Southerner trying to reconcile his Southern pride and his rejection of racism. It begins with a scene where a black barista at Starbucks takes offense at the Confederate flag on the white narrator's shirt. "To the man that waited on me at the Starbucks down on Main, I hope you understand/When I put on that T-shirt, the only thing I meant to say is I'm a Skynyrd fan."

Paisley defends the song as an effort to -- you guessed it -- start a conversation. Personally, I think art that has to be defended on conversation-starting grounds probably isn't art. Conversely, I'm inclined to think that any song with Paisley's message would be denounced and ridiculed. Right or wrong, letting the South off the hook for its racial sins is not something that interests many of Paisley's critics. The fact that Paisley (and LL Cool J) made the critics' job so much easier doesn't change that.

Something similar can be said about the reception to Rand Paul's appearance at Howard University this week. Here, Paul did exactly the right thing by making his case to a politically unsympathetic audience of minorities. Though, at one point, he miscalculated a bit in an exchange where he assumed his audience didn't know that black civil rights pioneers -- including the founders of the NAACP -- were mostly Republicans. Howard, one of the nation's premier historically black colleges, is one of the few universities where the average student probably would know that stuff.

Much of the criticism of Paul centered on speculation about his motives. He's just trying to soften his image! He's using the audience as a prop! To which the only intellectually honest rejoinder is: Maybe he is! Isn't that what politicians do?

Both Paul and Paisley are doing exactly what liberal politicians, civil rights activists and editorial boards have been demanding for decades. Paisley contributed his best effort for a "frank dialogue." Paul reached out to minorities, engaged in the conversation and didn't take blacks for granted. No one should be shocked that neither effort settled anything. That's how conversations are supposed to work, but not, apparently, the kinds of conversations the conversation-starters have in mind.