The Care and Feeding of an Angry Territory 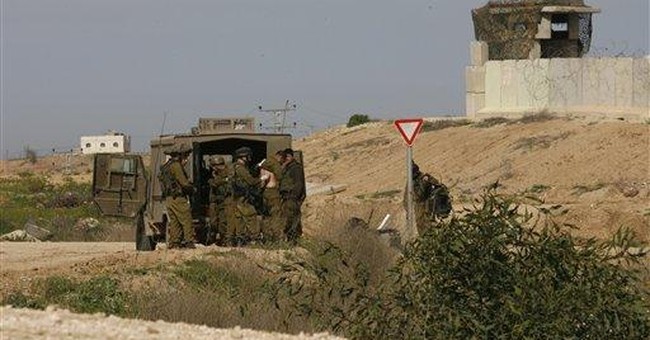 Things are going poorly in Gaza. Who among us can contain our shock?

A densely populated, profoundly poor and intensely angry territory, the Gaza Strip is run by Hamas, a band of thugs proudly committed to the destruction of their neighbor, Israel. Hamas, according to The New York Times, is mimicking Hezbollah, the Lebanese terrorist organization funded by Iran and Syria. Hezbollah masterminded the practice of launching rockets into Israel from civilian areas and then screaming "war crime" whenever Israel responded to the attacks.

"What we learned from Hezbollah," said Hamas spokesman Fawzi Barhoum, "is that resistance is a choice that can work."

Translation: If you thought we were committed to permanent war with Israel before, you ain't seen nothing yet. Indeed, Hamas seems to have gotten more than mere inspiration from Hezbollah. Hamas is now firing more sophisticated rockets, allegedly imported from Hezbollah's patron in Tehran.

The irony is that the "Jewish entity," as Hamas sometimes calls it, is obligated, according to human-rights groups, to provide food, water and electricity to Hamas' subjects, even as those subjects openly support Hamas' ongoing war on Israel. It's a bit like being required to provide a hot meal and a warm bed to an intruder even though he intends to kill you in your sleep.

"Israel has the right and obligation to protect its citizens, but as the occupying power in Gaza it also has a legal duty to ensure that Gazans have access to food, clean water, electricity and medical care," Kate Allen, Amnesty International's UK director, told The Telegraph. "Punishing the entire Gazan population by denying them these basic human rights is utterly indefensible."

There are a few problems here. First, food, clean water, electricity and medical care may be all kinds of things, but they aren't human rights. They may indeed be the minimum obligations a modern state must meet in terms of its citizens' needs, but there is no inalienable right to material stuff.

More important, we are constantly told that the Palestinians aren't Israel's people. Whatever obligations Israel might have to provide food, water, electricity and health care to its own citizens, it's not clear why it has those obligations to the Gazans, particularly when those Gazans are committed to the destruction of Israel.

Human-rights groups say Israel must provide these things because Israel is the "occupying power." But Israel no longer occupies Gaza, which Amnesty knows. That's why they say Israel's "blockade" of Gaza is indistinguishable from occupation.

But whether or not "blockade" is the right word for Israel's actions, it's not the same thing as an occupation. America had a blockade of sorts against Iraq for a decade. Then we occupied it. If there's no difference between the blockade and the occupation, what has everyone been arguing about?

So why does Israel scrutinize Gaza's borders and ports? I'll give you a hint. It has something to do with the fact that Gaza's leadership keeps launching rockets into Israel as part of this overarching policy objective to destroy Israel.

No one will accuse me of overstating things when I say it's not a great situation. Obviously, there's a cycle of poverty and violence that fuels some of the rage toward Israel. Obviously, it's terrible that innocent Palestinians are caught in the switches. It's also terrible when innocent Israelis have Katyusha rockets raining down on them.

But who is to blame?

The answer to that familiar question usually depends on whether you see Israel as a normal country with the right to exist and protect its citizens, or as an interloper victimizing Palestinians who are justified in their rage. I fall into the camp that says Israel should be allowed to do what any other country should be allowed to do to protect itself. I will get e-mail from people who disagree.

But there's a third camp. These are people who believe that both things are simultaneously true. They believe that, sure, Israel has a right to exist, but that Israel also has an obligation to make the Palestinians whole and happy.

It's a nice thought, and it has its merits. After all, the Palestinians have had the worst leadership imaginable for generations, they are used as props by neighboring countries, and Israel has not always treated Palestinians fairly. So, yes, of course it would be nice if they could be made happy.

But is it possible? The answer, at least for the foreseeable future, is "no." The desires of the Palestinian people and the demands of their leaders are ultimately incompatible with any kind of accommodation with Israel. Until the intruder stops trying to kill the homeowner, it’s crazy to talk about them becoming roommates. I If that amounts to blaming the victim, then I blame the victim.