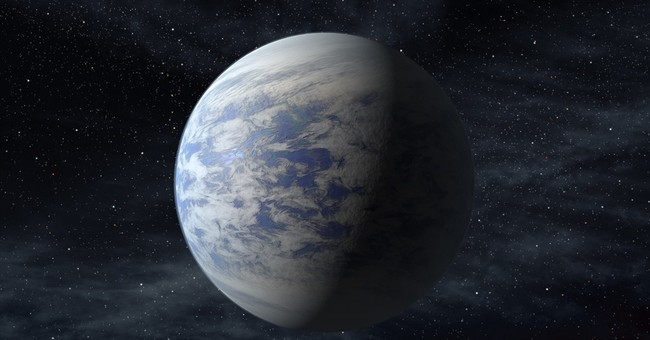 "The heavens reek, the waters below are foul ... we are in a crisis of survival." That's how Walter Cronkite and CBS hyped the first Earth Day, back in 1970. Somehow we've survived since then, and most of life got better, although I never hear that from the worrywarts.

Of course, some things got better because of government: We passed environmental rules that got most of the filth out of the air and sewage out of lakes and rivers. Great -- but now we're told that we're in big trouble because greenhouse gases cause global warming. I mean, climate change.

"Crop yields are down, deaths from heat are up," says the Los Angeles Times. The "Worst Is Yet to Come," warns The New York Times. This hype is not new. Alarmists always fool the gullible media. They once fooled me.

Reporters don't make these scares up. The recent hype about global warming comes from the Intergovernmental Panel on Climate Change. Most of its members are serious scientists. But reporters don't realize that those scientists, like bird flu specialists, have every incentive to hype the risk. If their computer models (which so far have been wrong) predict disaster, they get attention and money. If they say, "I'm not sure," they get nothing.

Also, the IPCC is not just a panel of scientists. It's an intergovernmental panel. It's a bureaucracy controlled by the sort of people who once ran for student council and are "exhilarated by the prospect of putting the thumb of the federal government on the scale."

Actually, that wasn't a quote from a global warming alarmist. It's from anti-marijuana alarmist and former Secretary of Health, Education and Welfare Joe Califano. But it's the same crisis mindset. Scientists who disagree, who are reluctant to put their thumbs on the government scale, don't feel welcome in the IPCC.

It's possible climate change may become a problem. But even if industrialization brings warming, we've got more important problems. On my TV show this week, statistician Bjorn Lomborg points out that "air pollution kills 4.3 million people each year ... We need to get a sense of priority." That deadly air pollution happens because, to keep warm, poor people burn dung in their huts.

Yet, time and again, environmentalists oppose the energy production most likely to make the world cleaner and safer. Instead, they persuade politicians to spend billions of your dollars on symbolism like "renewable" energy.

"The amazing number that most people haven't heard is, if you take all the solar panels and all the wind turbines in the world," says Lomborg, "they have (eliminated) less CO2 than what U.S. fracking (cracking rocks below ground to extract oil and natural gas) managed to do."

That progress occurred despite opposition from environmentalists -- and even bans in places like my stupid state, New York, where activists worry fracking will cause earthquakes or poison the water.

Do environmentalists even care about measuring costs instead of just assuming benefits? We spend $7 billion to subsidize electric cars. Even if America reached the president's absurd 2015 goal of "a million electric cars on the road" (we won't get close), how much would it delay warming of the Earth?

"One hour," says Lomborg. "This is a symbolic act."

Symbolic. Environmentalism is now more religion than science. It even comes with built-in doomsday stories to warn people about what will happen if they disobey -- a bit like the movie "Noah" that's in theaters now.

While environmentalists lament that our time is running out, environmental indicators get better, technological improvements reduce carbon dioxide, water gets cleaner for millions, and human life expectancy goes up.

This Earth Day, instead of attacking those who sell fossil fuels, I will applaud them for overcoming constant environmental hysteria -- while providing affordable energy that will allow us to fight poverty, which is the real threat to the people of the world.

Watch: Reporters AGAIN Herded Away From Biden as Questions Are Asked, Even Kamala Appears Tense
Redstate
California Democrats propose a wealth tax which taxes you even after you leave the state
Hotair