Comrades Get to Torture Ransom 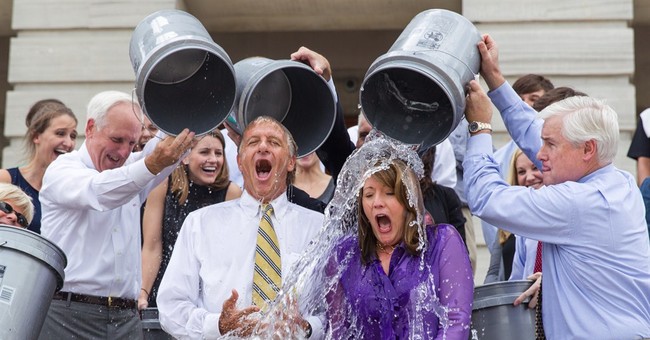 I have selfish reasons to do the Ice Bucket Challenge this year.

To get the basement dwellers up to speed: The Ice Bucket Challenge is where a person has an ice bucket with water dumped over his head to benefit the ALS Association.

I also give a chance to comrades to torture me with this modified version of waterboarding for only $100.

All this because my father died of ALS in 2004.

My grandmother died of ALS as well.

And that means that there is a great probability that someone in my immediate family—me, sister, brother, etc—will die of the same disease.

The good news personally is that genetic research shows that if the disease was passed along by my father, as it was, the disease for me—if it does develop at all-- won’t start until I am aged 65 or so.

You see, in the Ransom family we have rare, familial strain of the relatively uncommon ALS disease. The familial strain only accounts for about 10 percent of cases of ALS in the sense that someone else in the family has died of the disease. And make no mistake everyone—almost-- dies from the disease.

“About twenty percent of people with ALS live five years or more and up to ten percent will survive more than ten years and five percent will live 20 years,” says the ALS Association. “There are people in whom ALS has stopped progressing and a small number of people in whom the symptoms of ALS reversed.”

The disease is more fatal than Ebola and more than fatal Breast Cancer (11 percent mortality after five years).

Of course we all have to die of something.

But count me amongst those who think old, old, even olde age is a perfectly good reason to die at 123 years with a tobacco pipe in one hand—I don’t smoke, but by then I won’t care—and a glass of rum in the other.

But the good news is that because there is a familial strain researchers have some genetic data that may be helpful for all ALS patients. And research dollars are important.

So this is why on the day we celebrate the three kings who bore gifts for the baby Jesus—January 6th, 2015—I will have a friend dump ice water on my head.

Yes, for every $100 donated to the ALS Association, I will have another ice bucket dumped on me—on Three Kings Day!

Now, I know for guys like Ericynot, Dr. Roy, Goldilocks, Ken325, Truth 001, Catballs, and Eric Hillinger you’d prefer it to be boiling oil dumped on me. But I live in California now and oil is a fossil fuel, virtually banned by liberals here. I checked into to the local regulations, and dumping oil anywhere, even on person as disposable as an old, white dude, is illegal in California.

I know, I’m shocked: Like you guys I checked twice, but even here in liberal California, they recognize that dumping boiling oil on an old, white guy is almost as likely to result in death as ALS will.

Or maybe they don’t want all that burning, old, white guy carbon polluting the atmosphere.

In either event, it is illegal.

30,000 Americans have ALS right now, with 5,600 diagnosed with the disease every year. It takes a long time to diagnose, with virtually every other possibility exhausted before diagnosis.

That means the disease is well progressed before diagnosis.

In fact, someone I love may have it now and not know.

Help them please, if you won’t help me.