If one were to take a look at the technical signals for the market, there are plenty of reasons to be concerned here. The market came close to breaking support levels earlier this week on strong, convincing volume.

The news on economic front continues to be worrisome as well. Slowing growth in China, European economic stagnation and mixed earnings here at home are signaling that downward revisions to economic expectations are in order.

While conceding that private demand is growing in the U.S. the IMF has cut GDP growth forecasts to below 2 percent on the basis of government sequester saying, “In the United States, the focus should be on defining the right path of consolidation. While the sequester has decreased worries about debt sustainability, it is the wrong way to proceed. There should be both less and better fiscal consolidation now and a commitment to more fiscal consolidation in the future.”

Buy now, save later, in other words, the usual recipe cooked up by statists and liberals.
The recipe is also an indication of why it’s likely that financial markets will continue to move up indefinitely, despite technical worries, fundamental worries and wild cards like a North Korean missile launch.

Peace and prosperity- relics of the 20th Century- are way over-rated when you got gobs and gobs of cash created by the central banks worldwide.

In the chart below, I overlay the U.S. monetary base on the S&P 500 over the last two years. As you can see there is a strong correlation between the movements of the S&P 500 and increased monetary base. 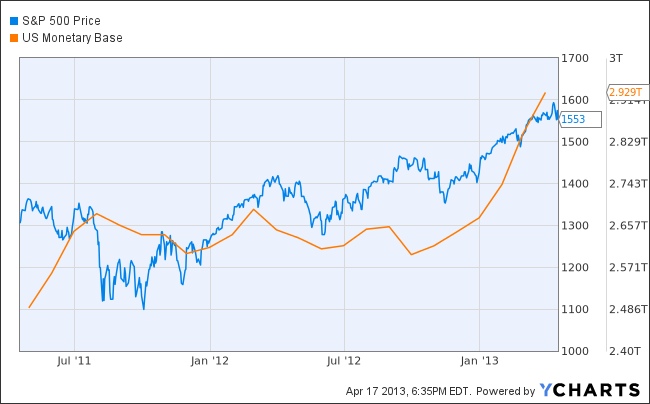 What strikes me in the chart isn’t so much that the expanded monetary base is driving the market up, but rather that it is acting as a floor for the market, preventing overly broad declines.

And look how much liquidity has been added to the monetary system just recently.

But that doesn’t mean that there won’t be ups and downs, even if there is a floor.

If you listen to Ransom Notes Radio—2PM ET M-F or stream at your leisure—you’ll know that for some time I’ve been warning investors about record low levels on the VIX, which closed up at $16.51 on Wednesday after trading as high as $17.50 intra day.

“Call options buying recently hit a three-year high for the CBOE's Volatility Index,“ reports Yahoo Finance, “a popular measure of market fear that usually moves in the opposite direction of the Standard & Poor's 500 stock index.

“A call buy, which gives the owner the option to purchase the security at a certain price, implies a belief that the VIX is likely to go higher, which usually is an ominous sign for stocks.

“’We saw a huge spike in call buying on the VIX, the most in a while,’ said Ryan Detrick, senior analyst at Schaeffer's Investment Research. ‘That's not what you want to hear (because it usually happens) right before a big pullback.’”

On February 1st I warned:

Also known as the Volatility Index or the Fear Index, the VIX is trading near lows at $13.04. That means that there isn’t a ton of fear in the market. That is often misunderstood by some people- even (gasp!) economists- to mean that things are just swell.

A case in point is that The Economist says that when Obama was elected in 2009 the VIX stood at 46, but “[a]t the start of his second term, by contrast, the Dow hit a five-year high, while a widely followed index of investor fear called the VIX reached a near-six-year low.”

The low on the VIX is not good news, however with all due respect to economists.

Let’s see it in action in The Economist’s own example.

In other words, when the VIX is this low, it can only go higher, generally speaking- which means something bad is about to happen as the VIX trades near $13.

The fact that The Economist, the franchise publication for, um, economists, doesn’t know this, should worry you- especially if you rely on their optimistic assessments of the economy to make investment decisions. And yes: These are the guys who plan bailouts and QEs and Dodd-Frank and actuarial tables for Social Security and all the other stuff Washington can think up that doesn’t work.

But don’t sweat it. The Federal Reserve Bank, the Bank of Japan and the European Central Bank will keep throwing money at the market.

Hopefully oil prices will continue on a steady, downward slant, relieving the economy of the tax burden that Washington unwisely has imposed on us in 2013 and beyond.

A note of caution however: On February 21st I warned that gold prices were breaking down- listen starting at about the 16:19 mark. That trend has continued.

The chart below shows how quickly market sentiment can change, regardless of money supply.

A flash crash is not likely for the stock market. But we could see a ton of sideways action there. 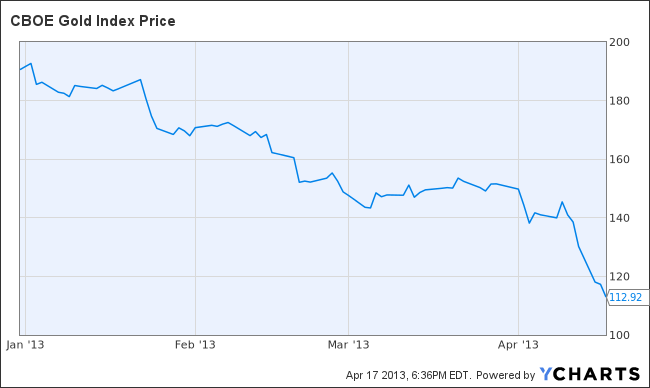