Donald, Nancy and Chuck Prove to be Lousy Sausage-Makers

John Kass
|
Posted: Jan 11, 2019 12:01 AM
Share   Tweet
The opinions expressed by columnists are their own and do not necessarily represent the views of Townhall.com. 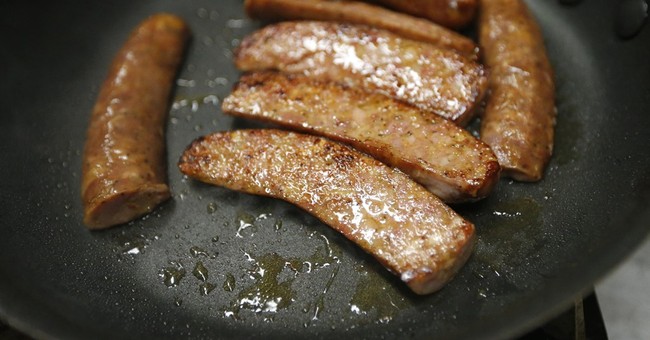 Before we get into all the liberal media hysteria over the government shutdown and the southern border, and Donald, Nancy and Chuck hissing at one another while avoiding a workable compromise sitting right in front of their noses, a word about sausage-making.

Because what they're doing in Washington -- with all their hot shouting, blistering virtue-signaling and scorching shrieks and national temperature-raising over the government shutdown -- is unfortunately being called sausage-making.

Here's a fact check: Screaming and shouting and encouraging the media into the usual bleating hysterics isn't sausage-making.

Some dumb politician -- or maybe a crooked journalist who never held an honest job in a meat cooler -- made up that idiotic cliche about politics being like sausage-making years ago.

But I've stood for hours in a freezing meat cooler, sawdust at my feet, making sausage for my father at our family supermarket. I wasn't alone.

If you keep your head clear and cold, you won't lose a hand. And if you concentrate, you'll make the customer happy.

A butcher wants it cold to work the meat. But politicians want things hot. Clearly, they know nothing of good sausage.

And so here we are, with Republican President Donald Trump and his two Democratic foils, House Speaker Nancy Pelosi and Senate Minority Leader Chuck Schumer, seemingly trying to make sausage in public but making a steaming hash of it all.

The meat: Trump wants $5.6 billion federal money for a wall on the southern border. Schumer and Pelosi, who've supported border barriers in the past, now say the president is all about "fearmongering" and that a wall is "immoral." Trump shuts down the government.

The fat: Predictably, the media freaks out, with liberal pundits insisting that what's going on along the southern border isn't a crisis, just Trumpian rhetoric. But then many of the same geniuses told us that the caravan coming up from Central America wasn't real, until it was.

The casing: Pelosi and Schumer want Trump to capitulate and reopen the government, and after that's done and he's given away any leverage, they promise they'll continue negotiating on border security.

If Trump and the Republicans believe that Schumer and Pelosi will negotiate on border security after Trump caves on a shutdown, the Republicans are dumber than liberal pundits insist.

The spice: There could be a compromise in all of this, but U.S. Rep. Alexandria Ocasio-Cortez and the rest of the hard political left aren't really interested in compromise. They're interested in power and pushing the Democratic establishment types out of the way.

Perhaps this is why an old-timer like Pelosi has that bothersome "Eyes Wide Shut" expression, as if staring into headlights. But I wonder if she sees anything at all.

The last thing the Democrats want from all of this is something Trump mentioned in his speech from the Oval Office the other night: In terms of jobs and wages, unskilled African-American workers are vulnerable to economic pressure from undocumented immigrants. They compete for the same jobs.

But that's not discussed much, is it? Ever ask yourself why?

And all those fats, meat, spices and casings aside, the three of them, Donald, Nancy and Chuck, met on Wednesday, and Trump didn't like what he heard and stormed off.

"Just left a meeting with Chuck and Nancy, a total waste of time," Trump tweeted shortly afterward. "I asked what is going to happen in 30 days if I quickly open things up, are you going to approve Border Security which includes a Wall or Steel Barrier?" he continued. "Nancy said, NO. I said bye-bye, nothing else works!"

"The president stomped out of the meeting when he said to me, 'Will you support a wall?' And I said no," Pelosi said. "Now they're trying to mischaracterize what he actually said. But that's par for the course with going to the White House.

"You cannot come to a conclusion if the president of the United States says, 'My way or the highway, there's nothing to negotiate, either agree with me or it's over.' "

The pot said what, Nancy?

There is, of course a compromise here: Trump wants border security. And I think most Americans want it too.

Schumer and other Democrats aren't in a winning position here. Democrats were once quite eloquent and forceful in their rhetoric to stopping illegal immigration, but now they've recalculated and see Latinos as a new power base, and so they call for "comprehensive immigration reform."

We can't have any sort of comprehensive reform without addressing the hundreds of thousands of young immigrants brought to this country illegally by their parents, who themselves crossed the American border illegally.

They're the Dreamers. They want to legally call America home. Why not let them stay?

If they're not in criminal gangs or possessed of violent criminal records, the Dreamers should be given legal residency. That's what Trump and the Republicans should offer the Democrats.

And in exchange, Democrats should give Trump and the Republicans the $5.6 billion for the wall.

This is called compromise. Remember the word?

It's what Americans have proven they can do, when they're not ruining the sausage for everybody.