Paris Attacks Are Cause to Punish Real Enemies, Not Invent False Ones 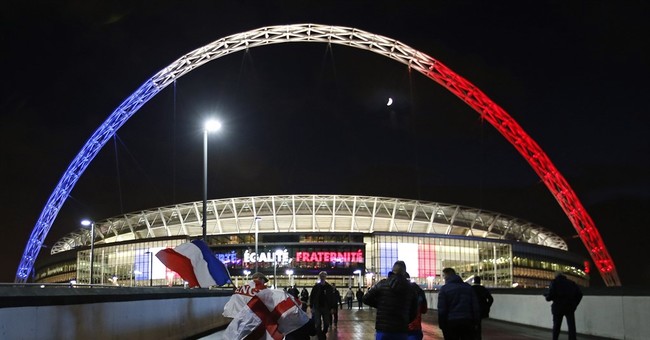 If you stand out on Michigan Avenue in the evening -- on that Magnificent Mile we also call Boul Mich -- you'll hear many languages spoken on our most international of streets:

Italian and German, Russian and Turkish, Chinese, Arabic and many other tongues, including that most beautiful of all: French.

But the other night, after the terrorist slaughter in Paris, there were few if any French tourists on Michigan Avenue. I'm sure most were in their hotel rooms, desperate to call home, horrified, watching the news of the bloody work of the Islamic State.

"To all those who have seen these awful things, I want to say we are going to lead a war that will be pitiless," said French President Francois Hollande.

Our politicians offered words of support and resolve. The great buildings of Chicago and the world are bathed in the blue, white and red colors of the French flag to show solidarity with the French people.

We are all French now.

But it wasn't always that way, was it, between the French and ourselves?

For years, American policymakers have made punching bags of France, and some of us foolishly played along.

Recently, it was Jeb Bush jabbing at the French.

"You should be showing up to work," Bush scolded Sen. Marco Rubio at a Republican debate. "I mean, literally, the Senate, what is it, like a French workweek? You get like three days where you have to show up?"

It was Jeb Bush's brother, President George W. Bush, whose invasion of Iraq destabilized the Middle East and helped lead to the growth of the Islamic State.

But Bush didn't mention any of that. He just used a snarky reference. The French ambassador to the U.S., Gerard Araud, was incensed.

"A French workweek of three days?" the French ambassador tweeted. "No, but a pregnancy paid leave of 16 weeks, yes! And proud of it."

In a political ad, Gingrich attacked Romney for speaking French, as does Democrat and Secretary of State John Kerry.

"He'll say anything to win," said a voice in the anti-Romney ad. "Just like John Kerry, he speaks French, too."

And that was delivered as if French were the language of cowards.

Republican Rick Santorum, a third-tier war-hawk candidate for president, issued a statement Friday calling for prayers for France to stand against evil.

But in the last election, Santorum railed against the French.

"Name one time in the last 20 years that the French stood by us with anything," he said.

And who can forget references to cheese-eating surrender monkeys? Or those french fries removed from the congressional cafeteria by now-disgraced former House Speaker Dennis Hastert and replaced with "freedom fries"?

All this French bashing was supremely ignorant, of course, and stupid, given that there would not be a United States of America without the French, and that both our nations have been joined since our beginning.

I once, too, stupidly mocked french fries and so on. I probably should ignore my shame and move on, but I can't. I won't. Why?

Because it illustrates how easily we can be used, a reminder of how politicians employ symbolism and language to get what they want.

And if we're not extremely clear in our minds, we can be tricked again, as was I, as were many Democrats and Republicans, into supporting that suicidal neoconservative policy in Iraq.

France was not in favor of the U.S. going into Iraq. The Bush administration characterized the French as cynical and self-interested, as France had a working relationship with Saddam Hussein. But then, so did we.

Yet because the French opposed the Iraq War, they were ridiculed by Republicans and made weak in American eyes, almost an enemy. If any nation knows about disastrous colonial policy in North Africa and the Middle East and the inevitable blowback, it would be France.

Syria is mired in a Sunni vs. Shiite Islamic war, helped by Bush's Iraq invasion and by President Barack Obama's dithering. The Sunni Islamic State brain trust would like nothing better than for the West to crusade against Islam. It would make them stronger.

Should we finally secure our own porous borders and vet Syrian refugees? Yes. Should we encourage and arm other Muslim nations to destroy and fight the Islamic State? Yes.

Should we invade with thousands of American soldiers, do even more harm to the Middle East and risk a shooting war with Russia? No.

Let us always remind ourselves what politicians of every nation -- and especially murderous terrorists -- already know: Fear is the goad used to push angry people into armed herds.

And our recent relationship with France illustrates that.

The French were our great ally when America began. If not our father, at least they were our brother.

And recently, they became a nation treated with contempt by many of the same voices who now talk easily of brotherhood. Beware of those same voices when they talk of war with Islam.