Cold Weather Brings Out the Stupid in TV, and Sometimes in Kids 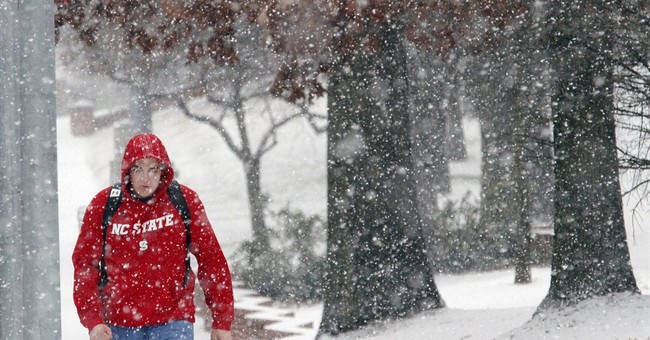 If there's one thing more stupid than Chicagoans whining about the cold (as if they've never experienced February in the city by the lake), it's another one of those stupid weather stories.

And stupid weather stories -- the kind that demean TV reporters and involve frozen T-shirts and bubbles -- are most likely dreamed up by diabolical TV news directors who must justify spending all their cash on attractive meteorologists.

The meteorologists aren't the issue here. It's the hordes of poor general assignment reporters sent out to do weather tricks that is heartbreaking.

Like the dramatic throw-a-cup-of-boiling-water-into-the-air-trick. It makes steam! Or maybe it freezes? I don't know, and I'm not going to find out. It's in a cup and it goes up into the air and makes a spray and who gives two figs? Not me.

And what about the dramatic "Let's-blow-soap-bubbles-into-freezing-air-and-they'll-freeze!" stunt. How cool! The frozen bubbles crumble like so many broken dreams. Or not. Perhaps they just sit there, frozen on the sidewalks, forever. Who the hell cares?

Don't forget the frozen T-shirt trick, with the poor reporter forced to push a T-shirt into a bucket of water with a stick, then put it on a hanger and sit there watching it freeze.

The reporter can probably hear the news director on the phone telling the producer, "More steamy breath, more steamy breath." The reporter looks deeply into the camera. He sighs one of those deep sighs, perhaps it's a sigh of suppressed, murderous rage and thinks:

If you happen to see a TV news director weeping, it might have everything to do with the big weather story that won't happen.

Officials in Des Plaines, Illinois, panicked by lawyers whose whispers turned their spines to jelly, recently announced that they were canceling their first "Penguin Plunge."

The idea was to gather up dozens of people who'd jump half-naked into freezing Lake Opeka on Feb. 28, an act of madness and kindly charity to raise cash for the Special Olympics. The Lake Opeka "Penguin Plunge" was supposed to mimic the popular "Polar Plunge" in Lake Michigan, an event favored by Chicago's plunger extraordinaire, Mayor Rahm Emanuel.

If only TV news directors had a smidgen of decency, they'd stop compelling journalists and public officials to do stupid weather tricks and, instead, get the audience to make fools of themselves:

Many experts on our so-called celebrity culture know that American parents will do almost anything to get their kids on TV, especially if the parents can stand there, too, with good hair, hoping to be asked intelligent questions in the 15 seconds of face time they'll get after they show the plight of their child.

So why not have the kid lick the frozen pole and get his tongue stuck and then call the TV news director?

Why not? Because it's a terrible idea, that's why.

The only way to unstick someone would be to grab their hair and pull -- leaving chunks of flesh on the pole like pink chunky peanut butter -- or douse them with almost boiling water. The almost boiling water could release the frozen tongue, but it might also burn the lips off. And what's so fun about that?

The whole thing is just a stupid idea. Almost as stupid as the time our last governor ate a heaping tablespoon of cinnamon to satisfy a radio talk show host and could have easily choked to death right there on the studio floor, plunging the state into fiscal chaos.

So, FROZEN POLE LICKING IS A TERRIBLE IDEA. DON'T DO IT. DON'T DO IT. IT IS UNSAFE. IT MAY CAUSE SERIOUS INJURY -- your taste buds could be ripped off and left on the pole and you'll never know salty and sweet again -- so DON'T DO IT.

Apparently, children do get publicity if their tongues are frozen to a steel pole. And print reporters also work those stories. Yes I've done my share of weather stories, too, but not a kid stuck to a flagpole story.

Maddie Gilmartin, 12, a New Hampshire girl, was stuck to a flagpole "after licking it during a blizzard," reported the New York Daily News last year. She was left "tongue tied" for more than 15 minutes until rescued by East Kingston authorities.


Maddie said she did it "to see what would happen."

Sure it's cold, but it will pass. I tweeted a photo of a graveyard covered in snow. That's cold. But if you're not in the ground, you're warm and alive, so quit whining. In just a few weeks it will begin to warm. We'll have Chicago Fire soccer and White Sox or Cubs baseball to watch, and flowers to plant and ribs to barbecue.

In the meantime, let me leave you with a note sent to me by a retired Chicago detective named Ted. It is perhaps the most evil winter note I've ever received. I read it while trying to start my car, waiting for the seat warmer to work, teeth chattering.

"John. We are in San Diego. Had lunch on the ocean yesterday, going for cocktails on a sailboat this afternoon. I'll hoist one for you."