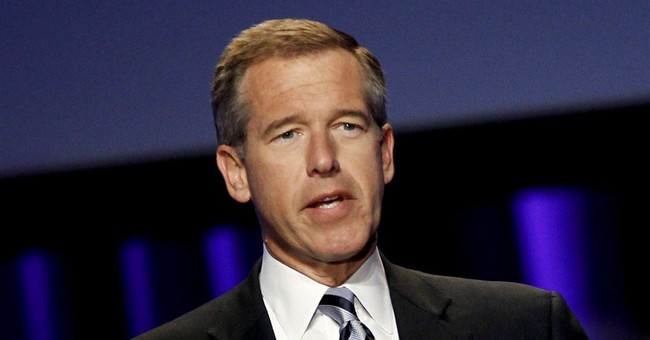 If this NBC news anchor thing doesn't work out for Brian Williams, I've got the perfect job for the guy:

Or better yet, as the New Commander McBragg.

The problem is that Commander McBragg is a cartoon character from the old Tennessee Tuxedo cartoon show that no one remembers. Tennessee was a penguin. Chumley was the big, fat, stupid walrus.

And McBragg was a British colonel, who would brag and brag about his war exploits, making this a perfect character for Williams to play, except, again, this business about McBragg being a cartoon.

Williams is only turning into a cartoon. He isn't a full-fledged cartoon, yet.

So Hillary's press secretary it is.

Can't you just picture them, Hill and Bri, holding court in a hotel bar on the campaign trail, regaling reporters with their crazy (yet completely untrue) war stories?

Clinton can retell her lie about how she braved snipers in Bosnia, perhaps throwing in a fake laugh or two, the devil-may-care laugh of beret-wearing French resistance fighters in bad movies.

Her eyes crinkle just so and the high-pitched cackle is released and you just know it's sincere.

And Williams could tell his lie about being in that helicopter in Iraq that was hit by a rocket-propelled grenade, the way he's been telling it on his newscasts and elsewhere for years now until he was caught and saw his career begin to circle the drain of life.

@oldpathsguide: "I will never forget the look on the faces of the citizens of Troy when we jumped out of the horse." #BrianWilliamsWarStories

@AustinCSmith1: "So there I was, tensions were high but it was an honor to cover the Surrender at Appomattox." #BrianWilliamsWarStories.

A mild-mannered newspaper columnist from Chicago even joined in.

@John_Kass "Then I turned to my 300 Spartans & said: If Xerxes' arrows darken the sun, then we shall fight in the shade." #BrianWilliamsWarStories.

Then I wrote another, "Remember that time King Leonidas turned to me at Thermopylae & said, 'Thanks Brian, for saving my life?'"

The lie that will haunt Williams forever is a simple one. He was in a military helicopter in Iraq. And years ago, reported correctly, that a helicopter in front of his -- how far in front we still don't know -- was hit by an RPG.

But that began to morph over time into a story that Williams was in the helicopter hit by the RPG, and a harrowing tale of survival and courage by the soldiers who protected him on the ground.

When he told it, the heroic Brian Williams in the company of other heroes, his voice sounded desperate to believe it. Whether this is madness or merely a childlike yearning to be big and tall and brave, it is not an acceptable character flaw in newspeople.

If you're a parent, you've seen 5-year-olds tell stories. They begin cautiously, and then somehow a demon or a giant enters the picture, and suddenly, they're desperate to believe their own saga. They're no longer telling a story. They're there, sword in hand, confronting that giant face to face.

That's fine for kindergartners; they haven't reached the age of reason. But news anchors?

Even worse was Williams' ridiculous apology. Ideally, a straight-talking person apologizes this way: I'm a fool. I'm sorry. There is no excuse. I'll go for a long walk now. In the woods. Please forgive me.

But Williams is a smoothie, like a politician, like a lawyer with a supple tongue. He doesn't want to go. He wants to stay and survive, and he turned his apology into yet another story about his virtue.

"On this broadcast last week in an effort to honor and thank a veteran who protected me and so many others following a ground-fire incident in the desert during the Iraq War, I made a mistake in recalling the events of 12 years ago. It didn't take long to hear from some brave men and women in the air crews who were also in the desert ..."

It was just so perfect, so oily, so self-serving, and now it is also being investigated. But what should be investigated as well is this:

Why is Williams so desperate to be considered a hero?

Is it a function of personality or a symptom of culture? Perhaps it's both.

The American elite -- and Clinton and Williams are definitely part of that class -- have developed an infuriating habit once common to the ancient Romans: They feel compelled to heap virtue on themselves and their peers whether deserved or not.

Most of it is practiced, thoroughly insincere, thoroughly expected. And the liars are pronounced most virtuous of all.

Politicians are often encouraged to look us right in the eye and lie their socks off. So we'll read their lips when they say no new taxes. We'll listen as he shakes that finger and declares he never had sex with that woman.

But liars aren't celebrated in journalism, and TV network anchors -- for all their great hair and teeth -- call themselves journalists.