What Responsibility Do Black Americans Have to Prevent Police Shootings?

John Hawkins
|
Posted: Oct 01, 2016 12:01 AM
Share   Tweet
The opinions expressed by columnists are their own and do not necessarily represent the views of Townhall.com. 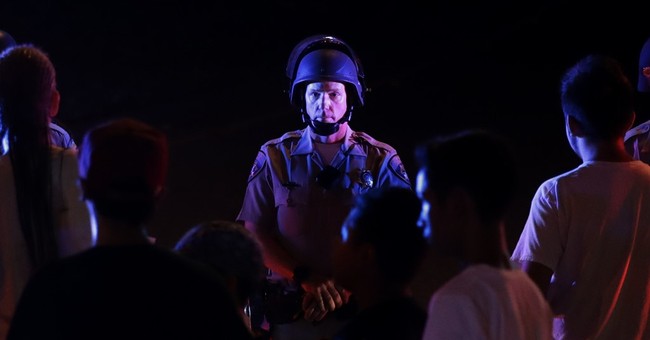 The job of the police is to deal with the dangerous, deranged people that the rest of us would rather avoid. Because of that, a number of police officers are going to kill people who pull out guns, attack them, act in a bizarre and dangerous way that makes them think they have a weapon they are about to pull out, etc., etc., etc.

Under perfect circumstances, even if everything is followed to the letter of the law, the police are going to kill people every year. This is an unavoidable reality.

But when it comes to the most lethal form of force — police shootings — the study finds no racial bias.

“It is the most surprising result of my career,” said Roland G. Fryer Jr., the author of the study and a professor of economics at Harvard. The study examined more than 1,000 shootings in 10 major police departments, in Texas, Florida and California.

Moreover, many more white Americans than black Americans are killed by the police. Again, you don’t have to take my word for it. According to the ultra-liberal

Federal tallies of lethal police shootings are notoriously incomplete; the Post sought to correct that lacuna by searching news sites and other information sources for reports of officer-involved homicides. The results: As of Jan. 15, the Post had documented 987 victims of fatal police shootings in 2015, about twice the number historically recorded by federal agencies. Whites were 50 percent of those victims, and blacks were 26 percent. By comparison, whites are 62 percent of the U.S. population, and blacks, 13 percent.

If anything, given that “Blacks commit violent crimes at 7 to 10 times the rate that whites do,” black Americans seem to be underrepresented in the number of people shot by the police.

Taking a human being’s life is an enormous thing and any time a cop does that, he should face an intense investigation. If it’s found that a cop killed someone needlessly, then he should face a trial for it. Furthermore, more police body cams are a good thing. So are better training and improved community relations efforts from the police.

The real core of the issue that no one seems to want to address is that a significant percentage of black Americans seem to believe that they should be able to do dumb and dangerous things around the police without facing any repercussions for it. Of course, there are people of all races who do dumb and dangerous things around the police. However, the difference is that if some white guy with a rap sheet as long as his arm resists arrest, attacks a cop and gets shot, there aren’t going to be any white people walking around with “Stop Killing Us” signs. On the other hand, if the situation is identical in every other way but the criminal in question is black, people will come out of the woodwork to defend his behavior and there may even be riots.

Even after rioting had begun in Charlotte over Keith Scott being killed, local NAACP Leader Corine Mack said, “I think the most important part is the contrast in him having a book versus a gun. But in my mind and in most of the community’s mind, it really doesn’t matter if he had a gun.”

That is simultaneously profoundly stupid and correct. It’s correct in that apparently, most of the people protesting in Charlotte didn’t care whether Keith Scott had a gun or a book in his hand when he was shot. On the other hand, it’s profoundly stupid because if you start behaving erratically around a police officer and have a gun in your hand, he is justified in shooting you. If you want to say that’s not justified, then you are essentially saying that you don’t want to have a police force because you are asking cops to be willing to die rather than kill someone who’s putting their lives in danger.

Since police officers are not willing to die at the hands of the Michael Browns and Keith Scotts of the world, they’re starting to avoid black communities altogether which creates a spike in crime. As Heather Mac Donald explains, the Ferguson effect is real and it is killing people.

How did the Ferguson effect affect Ferguson, Mo., last year? Precisely as you would expect. The little city of 21,059 already had a disproportionately high crime rate, as anyone observing the behavior of Michael Brown before he was fatally shot by Ferguson officer Darren Wilson in August 2014 would have guessed. In 2014, Ferguson’s violent-crime rate was 545 violent crimes per 100,000 residents, considerably above the 2014 national average of 362. But in 2015, the number of violent crimes in Ferguson surged 65 percent, from 115 to 190. Ferguson’s violent-crime rate in 2015 was 790 per 100,000 residents, over two times the national average of 373 in 2015. By comparison, the FBI estimates that the absolute number of the nation’s violent crimes rose nearly 4 percent in 2015, and the nation’s violent-crime rate rose 3 percent.

This is a consequence of perfectly rational behavior by the police. They know that if some thug high on bath salts comes at a cop with a knife and gets shot, there aren’t going to be any riots if he’s white. White Americans don’t look at a situation like that and think, “Wow! That could have been my son.” They think, “Wow, too bad that guy was killed, but he didn’t give the cop much choice.”

On the other hand, if the exact same situation happens and the criminal in question is black, you may have riots, a DOJ investigation, Jesse Jackson and Al Sharpton calling the department racist, attacks on officers, etc., etc. This may happen even if the police officer who shoots the criminal is black and the police chief is black. In part, that’s because in the aftermath of a shooting, the most ludicrously stupid stories are treated as gospel without waiting for an investigation. “He was standing there with his hands up.” “Oh, he was holding a book when he was killed.” “He was teaching a four year old girl how to read Korean before his church group started when the cop crossed the street to shoot him in the back for no reason!”

All black Americans don’t do this, but there are apparently enough morons who think this way to create an irrational riot almost everywhere and that’s a bigger problem than anything the police are doing. Corrupt or incompetent cops who kill people without good reason can be jailed. The majority of cops, who are good guys trying to do the right thing, can get more training. Officers can also be given body cams to help keep everyone on their best behavior, but none of that fixes large numbers of violent idiots who think it’s acceptable to loot the local Wal-Mart because a criminal with a gun gets shot by the police. You can say it's unfair to put it like that, but Black Lives Matter Leader DeRay McKesson explicitly defended looting in a course he taught at Yale and judging by the behavior we’ve seen in places like Ferguson and Charlotte, he’s far from an anomaly. Until black Americans look in the mirror and address the bad behavior and illogical thinking that everyone sees in this area, but no one talks about, nothing is going to fundamentally change with the police and more good people are going to die as the cops pull back from black communities.