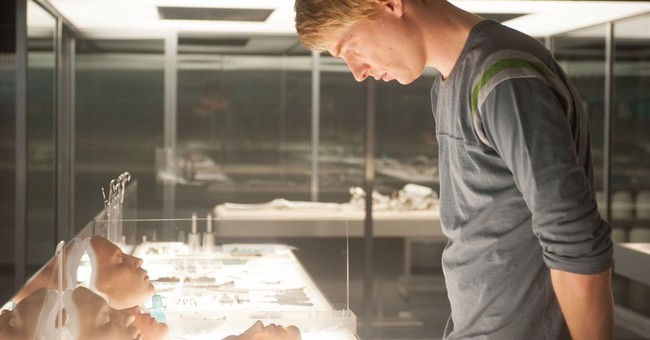 There have been a variety of films about the growth of artificial intelligence over the past few years but few match the subtlety and smarts that are so prominent in the new film Ex Machina. This film dares you to imagine a world where machines don’t overpower us as much as they tempt us into believing that they are like us.

In the film, Oscar Isaac plays Nathan, a multi-millionaire technical genius whose illustrious career has benefited from the fact that we as a society are constantly plugged in. He owns an internet company that only grows more and more powerful as its users grow more and more reliant on computers.

Isaac plays Nathan like a charismatic man who has all he ever wanted but still wants to do something more. Nathan seemingly has taken the next technological step. In a secluded lair that also serves as his home, he’s created a machine named Ava (Alicia Vikander) who looks and acts like a real human being. Aside from her midsection— which is clearly robotic— she resembles a young woman in her early 20s. Early on in the film, the sympathetic Caleb (Domhnall Gleeson), one of Nathan’s employees, is secretly recruited to visit Ava and test her true intelligence.

Writer/director Alex Garland, who previously scripted 28 Days Later and Sunshine, uses the enclosed setting of Nathan’s compound to tell a bigger story about surveillance, control and artificial intelligence. Nathan isn’t just a mad scientist here wanting to test his design. He’s a control freak who monitors every room in his compound and controls Ava’s moments and for a time, Caleb’s. It’s a testament to Isaac that his character comes across as a fully fleshed-out figure and one whose quest for technological achievement seems — at least superficially — extremely logical.

Ex Machina can easily be compared to Jurassic Park, another film about technological geniuses pushing the boundaries of societal norms. But whereas dinosaurs roamed the Earth millions of years ago, this science fiction drama is more forward-looking. The boom of the artificial intelligence era seems only a few years away so the script isn’t as unrealistic as it likely would’ve been if this film had been made a decade ago.

The filming itself sets up a beautiful dichotomy between the manipulative Nathan and the seemingly- innocent Ava. Nathan, an alcoholic who seems to reject human companionship, is often seen as an isolated figure sitting in a darkened closed room watching his surveillance monitors while Ava is oftentimes seen in a well-lit open room. Director of photography Rob Hardy beautifully captures the disparate environments of the three main characters (Caleb’s environment is appropriately a mix of the two worlds) who are subtly but undeniably all playing a game of tug of war with one another.

In December of 2013, Spike Jonze’s Her focused most of its attention on a lonely man seeking companionship with an artificially-intelligent computer. Here, Garland focuses his attention not on people who feel like they need an artificial computer in their lives. The characters here, especially Nathan, only want it in their lives as a symbol of how far they’ve progressed. It’s a scary scenario but the film operates as more than a dark glimpse of the future.

It operates as a statement about our current reliance on technology and how that reliance could ultimately undermine our own well-being.

Rebecca Downs
Joe Manchin Is the Grim Reaper for Most of the Left's Agenda Items...And He Just Killed Another One
Matt Vespa
One of the Big Lies In the Kyle Rittenhouse Case
Julio Rosas
Sen. Marsha Blackburn: Biden's Vaccine Mandate Is 'Overreach,' Moving Us to 'Socialist Agenda'
Rebecca Downs
Milley Compared China's Missile Test to This Historic Moment...And It's Not a Good One
Matt Vespa

One of the Big Lies In the Kyle Rittenhouse Case
Townhall
Florida now has America's lowest COVID rate; Yahoo News asks if Gov. Ron DeSantis deserves any credit
Twitchy
Cruz Rips Garland Apart and Mails the Pieces Back to Him in Blistering Exchange
Redstate
EXCLUSIVE: How Long Will Vaccine Authoritarians Sit in the Cold and the Dark?
PJ Media