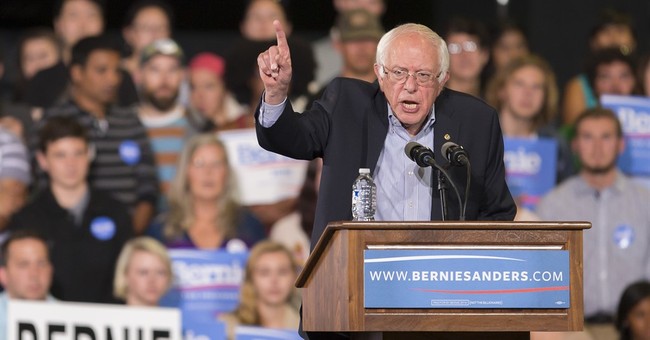 Bernie Sanders is angry. Who is he angry at? Rich people. Why rich people? That’s not clear.

At Liberty University, Sanders complained about a small number of people who have “huge yachts, and jet planes and tens of billions” while others “are struggling to feed their families.” In Madison Wisconsin, Sanders called for a “political revolution against greed.”

Take the world’s richest man, Bill Gates. When I was a student at Columbia in the 1970s, I remember a friend showing me a fantastic hand held device. It could add, subtract, divide and multiply. And it only cost $400. Today, I can sit in bed with my lap top, which in 1970 dollars cost less than $400. I can buy and sell goods on eBay, conduct personal banking, purchase airline tickets, book hotel rooms and even work the New York Times crossword puzzle – in large part because of Bill Gates.

Is Bill Gates greedy? There’s no evidence of that. He is giving all his money away in ways that are curing diseases that kill children all over the world. More generally, I have never met a truly creative person who was motivated by greed. But even if greed were the motivation, we need more of it – as long as it’s meeting our needs.

So what’s Sander’s complaint? Here are his own words:

"Today the Walton family of Walmart own more wealth than the bottom 40 percent of America."

When Sam Walton was alive, he was one of the world’s richest men. Yet he wore blue jeans and drove a pickup truck. No one in Bentonville, Arkansas even knew he was rich until they read about it in Forbes. Is Walmart making it harder or easier for people to feed their families? You be the judge.

Behind the rhetoric on the left, there is one persistent theme, always implicit, never explicit. Leftist rhetoric is designed to encourage people to believe that the reason they are poor are because other people are rich. And this kind of rhetoric is not confined to politicians who know nothing of basic economics. Paul Krugman, Joe Stiglitz, Jeffrey Sachs and other well-known economists are just as guilty. They invariably imply that “all property is theft,” a staple of barn yard Marxism. Yet, on rigorous examination, this idea is silly. Most of the people on the Forbes 400 list are self-made or next generation of self-made billionaires.

Writing in the Dallas Morning News, Cullen Godfrey asks: why do we demonize billionaires?

They didn’t steal our money. They earned our money by providing us with the things that we want and that make our lives better. The Forbes 400 list includes names such as Oprah Winfrey, filmmakers Steven Spielberg and George Lucas, Jeff Bezos (Amazon), Phil Knight (Nike), Elon Musk (Tesla), Charles Schwab, Ralph Lauren and Michael Ilitch (Domino’s Pizza). Of course, there are those with inherited wealth, but the vast majority on the list are first-generation, self-made billionaires, and those with inherited wealth have, as a rule, been excellent stewards of their good fortune.

Like Jeremy Corbyn, the new Labour Party leader in Britain, Bernie Sanders is appealing to our worst instincts. His is not the message of compassion and love. His is the message of resentment, jealousy and hate.

What would he do? Tax capital. He hasn’t given us a figure, but if he goes along with the 90 percent income tax rate favored by Paul Krugman or the 80 percent rate proposed by Thomas Piketty, Bill Gates may never have been able to start Microsoft. Sam Walton may never have given us Sam’s Club.

As I wrote at Forbes earlier this week, the left is intellectually bankrupt. While appealing to our basest emotions, they have no real solutions to any real problems. In fact, their “solutions” would almost certainly make the poor more poor.

There is, however, a proposal from the right of the political spectrum: tax consumption rather than saving, investment and capital accumulation. As I wrote previously:

[W]hen Warren Buffett is consuming, he’s benefiting himself. When he’s saving and investing, he’s benefiting you and me. Every time Buffett forgoes personal consumption (a pricey dinner, a larger house, a huge yacht) and puts his money in the capital market instead, he’s doing an enormous favor for everyone else. A larger capital stock means higher productivity and that means everyone can have more income for the same amount of work. So it’s in our self-interest to have very low taxes on Buffett’s capital. In fact, capital taxes should be zero. That means no capital gains tax, no tax on dividends and profits — so long as the income is recycled back into the capital market. We should instead tax Buffett’s consumption. Tax him on what he takes out of the system, not what he puts into it. Tax him when he is benefiting himself, not when he is benefiting you and me.