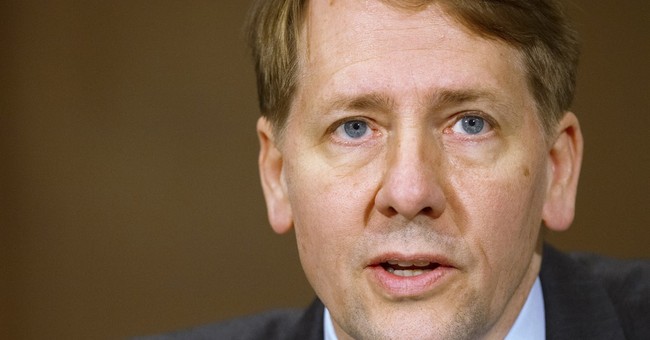 No place in our Constitution is the president granted supremacy to act legislatively without Congress. And no place in our laws is the president given authority to use executive branch agencies to criminalize whole segments of the economy it considers unworthy. However, we know from the public record that President Obama is using the Justice Department (DOJ), the Consumer Financial Protection Bureau (CFPB), and the Federal Deposit Insurance Corporation (FDIC) in something called "Operation Choke Point" to target small businesses by smothering their access to financial services. Without the ability to process payments, the administration chokes off the oxygen (money) needed for these “Mom and Pop” shops to survive. It’s a form of political nihilism never before seen in our nation’s history.

Most Americans are familiar with the DOJ and the FDIC. However the CFPB, a federal agency established by the Dodd-Frank Wall Street and Consumer Protection Act, has been operating under the radar for far too long.

Dodd-Frank effectively gave the CFPB unlimited regulatory power with little congressional oversight. The bureau’s budget is not subject to congressional appropriations—no power of the purse—because the Federal Reserve, not Congress, funds the agency. Given its independence from congressional scrutiny, the CFPB’s power to regulate is essentially a government license to destroy. What’s more, the CFPB is building a massive database on the financial transactions of every American. The Competitive Enterprise Institute (CEI), a libertarian think tank based in Washington D.C., has argued that the CFPB has “unaccountable power over the daily lives of the American people” that results “in a lack of public accountability, creating a power grab over every U.S. citizen.”

During most of our nation’s history, families, communities, churches, civic groups, and “Mom and Pop” businesses (i.e., civil society) have served as firewalls to restrain big government from flaming out of control. Americans with blemishes on their credit scores or short credit histories do not have the luxury of going to the big banks—SunTrust, Chase, Wells Fargo—for a small loan. These consumers depend upon payday lenders as credit and loan options. If the CFPB has its way, these lenders will be forced to permanently close their doors. Millions of Americans who are living paycheck to paycheck will have no where to go for short-term loans. The CFPB will have cut off an important financial option for working-class, middle-income Americans. Resources needed for emergency car repairs or to replace an appliance will no longer be available.

Ideological bureaucrats with a disdain for anything—the rule of law, the American people, civil society—opposed to their agenda are wreaking havoc on our economy and our liberty. The expansion of federal power—and more specifically the expansion of the executive branch—is the modus operandi of President Barack Obama. Since his first day in office, this president has sought to accumulate power and centralize control. There is no higher law for Obama than his own ideological self-interest. Obama acts more like a plutocrat or mafia boss than the leader of a “government of the people, by the people, and for the people.”

The CFPB is actively engaged in closing down businesses while at the same time collecting dossiers on American citizens’ personal, financial transactions. Congress should abolish the CFPB or, at the very least, put it under the appropriations process. It’s time for Congress to reign in this rogue agency.