On Election Day, It's OK Not To Vote. Really.

Jeff Jacoby  |  Sep 12, 2016
The opinions expressed by columnists are their own and do not necessarily represent the views of Townhall.com.
Top Columns
Trending on Townhall Media 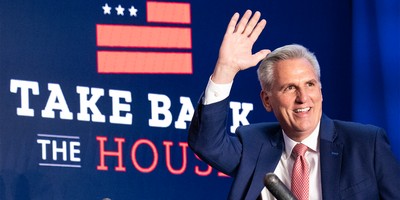 YOU DON'T VOTE? You're not alone. Tens of millions of American adults don't take part in elections, and most of them have perfectly good reasons for abstaining. In 2014, according to the US Census Bureau, 28 percent of nonvoters said they were too busy with other things, and 10 percent were out of town. Another 16 percent weren't interested in the election, and 8 percent didn't vote because they didn't like the candidates or the issues.

For more than 60 percent of nonvoters, in other words, the election wasn't a priority.

Every citizen has the right to vote, but no citizen is obliged to. That isn't just a truism. As with every other fundamental civic liberty, the freedom to vote incorporates the freedom not to vote. By guaranteeing your right to attend a church, to own a weapon, or to march in a protest, the Constitution simultaneously guarantees your right not to do those things — even if do-gooders, busybodies, or community organizers insist that you should.

With Election Day just eight weeks away, we can expect to hear a drumbeat of reminders that it's our "civic duty" to vote. As in electoral seasons past, celebrities will make perky videos to coax young people into showing up at the polls. Civil rights activists will remind the apathetic that Americans once died for the right to vote. Earnest pundits will write columns listing the seven reasons why everyone should vote. Or is it 10 reasons? Or 50?

Feel free to ignore them.

Please don't get me wrong: I'm a lifelong voter. No one has to persuade me to show up on Election Day to cast a ballot. I like the communal spirit of voting; years after marking my first ballot, I'm still moved by the civic ritual of coming together as equals, peacefully engaged in self-government. I once wrote that I experience voting as an act of faith — faith that government of, by, and for the people still has real meaning, notwithstanding the inescapable sleaze and grubbiness of politics in a democracy.

Then again, I also keep up with current events, and have an ongoing interest in government and public policy. I don't show up on Election Day because I believe that voting for anyone is better than not voting at all. I show up because I've thought about whom I want to vote for (or against), and hope, through my ballot, to effect a good outcome.

But not everyone cares about politics and policy. And those who don't should feel no pressure to vote just for the sake of voting.

When your car needs fixing, you want someone knowledgeable about auto mechanics to diagnose the problem; when a weighty medical decision has to be made, you probably wouldn't turn to inexperienced laymen to make it. The crafting of government policy — of tax law and defense budgets and judicial nominations and trade regulations — is at least as serious an endeavor as surgery and car repair. Many people, for wholly legitimate and understandable reasons, give no thought to governmental affairs. Fine, but why hector them to vote? If anything, they should be reassured that it's OK if they don't vote.

"In an ideal democracy," Yale law professor Stephen Carter remarks, "voting isn't a measure of participation at all — it's the outcome of participation." In other words, voting is meaningful when it represents the culmination of a citizen's engagement in the political process. Under our system, citizens who choose not to engage in the process — who pay little or no attention to election campaigns — have the same right to vote as anyone else. But a moral or civic duty to do so? Absolutely not.

(Besides, refusing to vote can also be an affirmative political choice. When candidates are odious, when their campaigns traffic in character-assassination, when election ads are no more than shameless pandering, declining to pull the lever for any of them might well be the response of an engaged and rational voter.)

This is not a liberal v. conservative issue. In his latest book, Writings on the Wall, NBA-superstar-turned-social-critic Kareem Abdul-Jabbar looks at America's dented political process and considers ways to repair it.

One recommendation: "Stop encouraging people who don't want to vote to vote." Low voter turnout, Abdul-Jabbar writes, is "not necessarily a bad thing" if it reflects the nonparticipation of Americans who tune politics out. He doesn't sugar-coat the point: "Voters who don't want to cast a ballot because they're too lazy or uninformed should stay home. . . . When we pressure people to vote, we're diluting the democratic process, by bringing out those who are easily manipulated."

There is nothing wrong with not caring about politics, or with having better things to do than vote. There is something wrong with turning the franchise into a fetish. Voter turnout is not the acid test of democratic health, and nothing is improved when we go to extremes to coax nonvoters to the polls. "Some of these people really shouldn't vote," says Abdul-Jabbar. "People that are voting in the blind are doing a disservice to our country."

On Election Day, staying away from the polls is also a legitimate option. For millions of Americans, it's the best one.