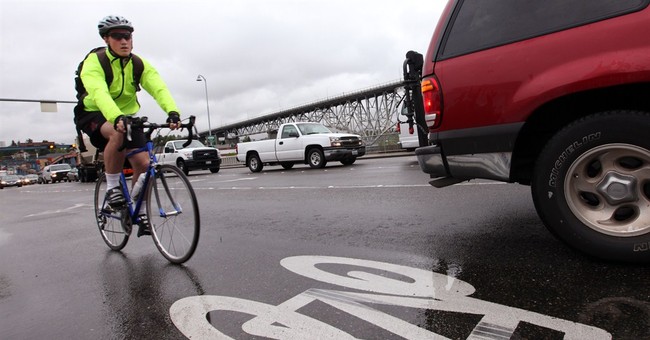 The Arnold Arboretum in Jamaica Plain is more than a renowned horticultural jewel; it is also a splendid venue for cyclists, with miles of meandering paths and gorgeous views of Boston. The Charles River Esplanade is another bikers' oasis, part of an 18-mile loop along the river that separates Boston from Cambridge. For commuters, the Southwest Corridor Park that stretches from Back Bay to Forest Hills is a marvel of urban design that offers terrific biking in the heart of the city.

If you want to ride a bicycle in Boston, you've got plenty of great places to do it.

Massachusetts Avenue during business hours isn't — and shouldn't be — one of them.

The death last month of cyclist Anita Kurmann, who was fatally struck by a tractor-trailer turning from Mass. Ave. onto Beacon Street, was a terrible tragedy. The 38-year-old medical researcher was at least the 13th cyclist killed in a collision with a motor vehicle on city streets since 2010. That number is sure to rise if Boston keeps encouraging people to ride bicycles where bicycles don't belong.

Busy thoroughfares aren't meant for cyclists. They are meant for the cars, trucks, and buses that transport the vast majority of people moving through the nation's cities. Those vehicles weigh thousands of pounds, operate at 300-plus horsepower, and are indispensable to the economic and social well-being of virtually every American community. Bicycles can be an enjoyable, even exhilarating, way to get around. So can horses, skis, and roller skates. Adding any of them to the flow of motorized traffic on roads that already tend to be too clogged, however, is irresponsible and dangerous.

According to the latest Census Bureau data, more than 122 million people commute each day by car, truck, or van.

But that doesn't deter the bicycle lobby, which could give lessons in brass to Donald Trump. Advocates demand more and more access to city streets, no matter how frustrating to the vast majority of drivers for whom those streets are designed. On many major roads, lanes for cars have been shrunk in order to carve out cycling lanes. "Share the Road," signs pointedly admonish drivers, as though sound traffic management calls for treating flimsy, slow, and distracting bikes as the equal of faster, more powerful motor vehicles.

And "sharing" the road, increasingly, isn't enough: Signs now decree "Bicycles May Use Full Lane," warning motorists that the biker ahead of them causing traffic to crawl has every right to be in the middle of the lane. And if there's only one lane of traffic in each direction, so that traffic on a city street is effectively reduced to the speed of a lone cyclist? Too bad.

All of which might be marginally more tolerable if bikers operated under the same restrictions that drivers do. But cyclists pay no taxes, don't have to be insured, undergo no safety inspections, and needn't register their vehicles. They don't get pulled over for riding without reflectors or headlamps, don't have to carry an operator's license, and aren't required to pass either a written or a road test in order to pedal in the streets. And have you ever seen a cop ticket a cyclist who ran a red light, weaved recklessly among lanes, or made an illegal turn? Me neither.

Bikes aren't treated like cars for a very good reason: Bikes aren't like cars. Which is exactly why they don't belong on busy city streets. Cyclists and traffic don't mix. It's not just foolish to pretend otherwise. It's deadly.