The Confederate Flag is Anti-American 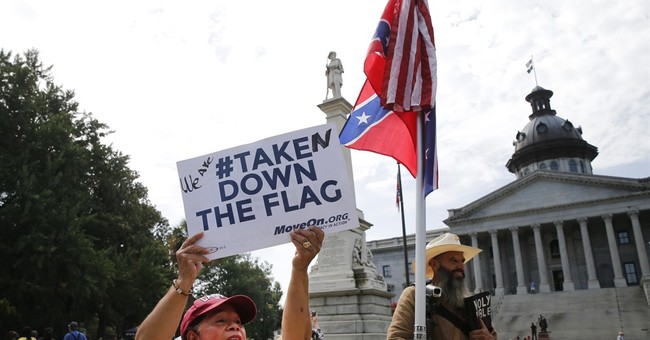 IN 1865, THE Confederate battle flag was defeated.

Early Thursday morning, by an overwhelming vote in the South Carolina House, it was finally discredited.

The bitter-enders and revisionists had a long run of it, far longer than anyone could have imagined when the Army of Northern Virginia commanded by Robert E. Lee surrendered at Appomattox Court House. Southern whites have had a century and a half in which to hallow and mythify that army's flag, and all the romantic excuses about "heritage" and "ancestry" they piled up to defend it won't dissipate overnight. But the rebel banner will no longer fly on the grounds of the Capitol in the statewhere the Civil War began. At long last, an ugly symbol of oppression has worn out its welcome in the public square.

American life nowadays is replete with examples of political correctness run amok. This is not one of them. The Confederate flag is an emblem of the most poisonous ideologies in our national history. The men and boys who followed it into battle may have fought with courage and died with honor, but that doesn't diminish by an ounce the hatefulness of the proposition for which they were prepared to kill and be killed. South Carolina and the Confederacy went to war to perpetuate the right of white Americans to buy and sell black Americans.

There is much to esteem in Southern history and culture. The Confederate flag casts a grim shadow over all of it. Removing the flag from statehouses and other civic spaces is a matter of moral hygiene and historical honesty — not, as some descendants of Confederate veterans claim, a betrayal of Southern history or a slur on their ancestors' character. Granted, some liberals and Yankees have tended to smugly assume the worst of all Southern whites, provoking some Southerners to embrace the rebel flag all the more fiercely. Yet there is no contradiction between execrating the Confederate cause while admiring what was noble or earnest about those who defended it.

When Ulysses S. Grant accepted Lee's surrender at Appomattox, he later wrote in his memoirs, he felt "sad and depressed," unable to rejoice at "the downfall of a foe who had fought so long and valiantly, and had suffered so much for a cause — though that cause was, I believe, one of the worst for which a people ever fought, and one for which there was the least excuse." (My italics.) Not for a moment did Grant question "the sincerity of the great mass of those who were opposed to us." Neither did he doubt the depravity of their goal.

Of course not everyone who honors the Confederate flag is a savage white supremacist like Dylann Roof, just as not everyone who fought for the Confederacy was a slaveholder. That doesn't change the brute fact that the flag is first and foremost a symbol of racial bigotry and victimization. That's why Roof was keen to flaunt it. Display it in your own front yard, if you wish — it's a free country — but on public lands and government property, it should never have been tolerated.

Even if the Confederate flag had no connection to slavery and the Civil War, it would nonetheless deserve to be shunned as a symbol of racial hatred. It was at the height of the Civil Rights movement in the 1960s that the flag was adopted across the South as an icon of opposition to black equality and voting rights. It was raised over the South Carolina statehouse in 1962, bluntly telegraphing defiance as Jim Crow's end was drawing near.

Understandably, the controversy swirling around the Confederate battle flag has focused on its racial significance. Yet it should also be remembered that the flag is odious for another reason: It represents armed rebellion against the United States. The banner of the Confederacy is the banner of slaughter — the banner of American troops cut down by the tens of thousands at Bull Run and Antietam and Shiloh. There could not be more literally anti-American colors than the Confederate flag. Had racial hatred and subjugation played no part in its history, it should still be anathema to anyone who reveres the Constitution. Or theUnited States of America.

The final downfall of the Confederate flag is a milestone all Americans can take pride in. We should have seen the last of that bloody emblem in 1865. Better 150 years late than never.