How Judges Corrode the Rule of Law 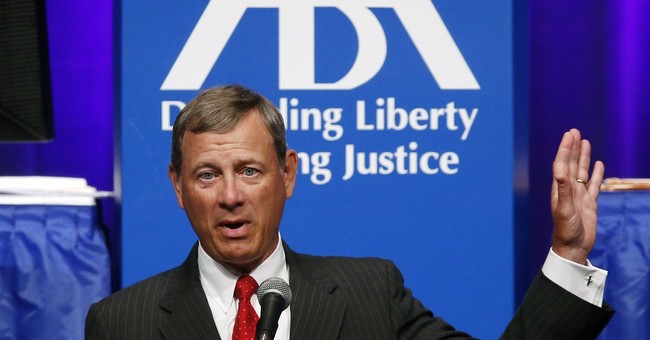 During his Supreme Court confirmation hearings in 2005, then-Judge John Roberts emphasized his strong belief in judicial modesty. "Judges are like umpires," Roberts famously said. "Umpires don't make the rules; they apply them." If confirmed as chief justice, he promised, "I will remember that it's my job to call balls and strikes and not to pitch or bat."

But it was no impartial umpire who authored last week's 6-3 opinion in King v. Burwell, the Obamacare subsidy case. Far from applying the rules as enacted in the Affordable Care Act, the chief justice discounted those rules as the product of "inartful drafting," passed by Congress without sufficient "care and deliberation." The lawmakers' substandard work product, he argued, freed the Supreme Court to disregard the statute's plain language, construing it to mean the opposite of what it says.

In short, as law professor Jonathan Adler tartly observed, the "umpire" took it on himself "to pinch hit to ensure the right team wins."

Roberts is hardly the first justice to succumb to the temptation to contort the law's plain text to generate a desired policy result. Ten years ago, the court infamously ruled in Kelo v. City of New London that private homes could be seized by eminent domain and given to corporate developers. The Fifth Amendment authorizes such takings only when the government needs the land for a legitimate "public use" — for instance, to build a highway. But in a 5-4 opinion by Justice John Paul Stevens, the court decided that "public use" could also mean private use, so long as the new owners were expected to create new jobs or pay more taxes than the dispossessed former owners. In effect, Kelo empowered government to transfer almost any owner's property to a more powerful private party: exactly what the constitutional language forbids.

The Commerce Clause is another constitutional passage whose meaning has been corrupted by judicial presumption.

One of the federal government's limited powers, enumerated in Article I, is "to regulate commerce . . . among the several states." For most of American history, Congress and the courts respected the obvious distinction between interstate trade, over which federal regulators have authority, and purely local intrastate activity, which the Constitution placed beyond their reach. That distinction died with Wickard v. Filburn, a 1942 case in which an Ohio farmer was penalized for growing more wheat than federal rules allowed. Nearly all of Roscoe Filburn's wheat was consumed on his own farm; none crossed state lines. Yet on the theory that even a few bushels of home-consumed wheat might indirectly affect the national wheat market, the justices decided that Congress could regulate it. By that logic, Congress can regulate everything. Now, alas, it does.

Take one more case of justices riding roughshod over a text's clear meaning: United Steelworkers v. Weber. Under Title VII of the Civil Rights Act, it is "unlawful" for "any employer" to discriminate on the basis of race in "on-the-job training programs." So when Kaiser Aluminum set up an on-the-job training program that gave preference to black employees, the white employee who sued had an open-and-shut case, right? Wrong: In a 1979 decision, Justice William Brennan wrote that the excluded white worker could not rely "upon a literal construction" of the law, since Congress's intention had been to improve the condition of blacks. Bottom line? A law prohibiting race-based hiring must be interpreted to permit race-based hiring. Brennan favored racial preferences. Therefore racial preferences would be upheld, statute or no statute.

The rule of law isn't indestructible. It is corroded by judges who act like superlegislators — never more so than when torturing the plain words of the law, forcing them to say what they don't mean.