Jeff Crouere
|
Posted: Jul 23, 2016 12:01 AM
Share   Tweet
The opinions expressed by columnists are their own and do not necessarily represent the views of Townhall.com. 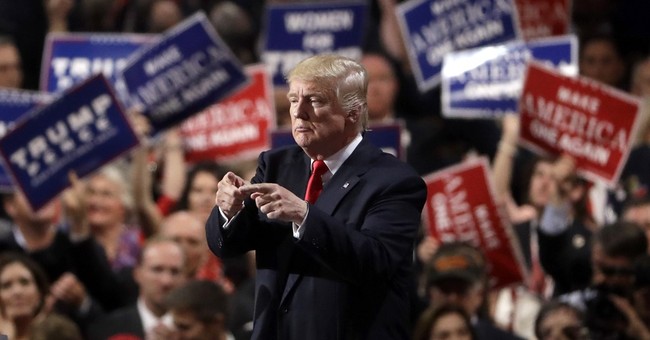 Donald Trump gave the speech of his life to conclude a rowdy, but successful, Republican National Convention. As with all Trump productions, there was showmanship and plenty of self-promotion, and the American people loved it. Ratings skyrocketed with over 22 million Americans tuned in to the GOP Cleveland convention on a daily basis.

In his masterful 76-minute speech, Trump covered all of the important issues such as ending political correctness, rebuilding our infrastructure, restoring our economy, creating jobs, taking the fight to ISIS, restoring our military might, ending Obamacare, and appointing conservative justices to the Supreme Court. However, he gave special focus to three issues: combating illegal immigration, ending bad trade deals, and restoring law and order.  Trump also said he would be the “voice” of the American people and lead the fight against a rigged system.

He also outlined Hillary Clinton’s abysmal record as Secretary of State and the disasters that she left behind in Libya, Iraq, Syria and other countries. Trump said that Clinton’s legacy was “death, destruction, terrorism and weakness.” He referenced her improper handling of classified materials and her deletion of 33,000 emails “so the authorities can’t see her crime.”

As one of his major themes, Trump outlined an “America First” policy which includes “safe neighborhoods, secure borders and protection from terrorism.”

The majority of the American people also registered their approval of Trump’s speech. In a CNN/ORC poll, 57 percent expressed a “very positive” reaction, 18 percent had a “somewhat positive” reaction, while only 24 percent had a “negative” reaction.  In addition, 73 percent of respondents said that the policies proposed by Trump in his acceptance speech will move America in the right direction, while only 24 percent said his plans would move the country in a negative direction.

Pollster Frank Luntz believes that the speech will propel Trump to a tie with Clinton or give him a small lead in the presidential race.

Now that the RNC is over, the nation’s media will immediately descend on Philadelphia for the Democratic National Convention. After the colorful and rambunctious Republican National Convention, the Democratic Party will feature a boring showcase of status-quo politicians. There will be no drama, no excitement, and no battles over the rules or endorsements. All of the Democrats have fallen in line behind Hillary Clinton, despite the FBI Director’s condemnation of her “extremely careless” handling of classified and top secret correspondence.

If, heaven forbid, Hillary Clinton is elected, she will continue to expand the disastrous healthcare nightmare known as Obamacare. She will undoubtedly nominate hardcore liberal Supreme Court justices. Clinton will also grow government, raise taxes, attack Second Amendment rights, expand the disease of political correctness, decimate our military, and allow more illegal aliens to enter the country among other issues.

In 2016, Republican voters defied the party elites and selected an unlikely non-politician as their nominee. In contrast, the Democrats will offer to the American people a typical politician who has limited real world, private sector experience and a non-existent record of accomplishment in her career of government service.

Hillary Clinton has been in the public eye for almost 30 years, serving in a variety of government positions such as U.S. Senator and Secretary of State. Now, she wants to graduate to the position of president of the United States. After being denied her party’s nomination in 2008, Clinton assembled the entire leadership of the Democratic Party to back her in this race. Her opponent had no chance of victory as Hillary controlled hundreds of superdelegates, who backed her regardless of how Democrats voted across the nation.

In his acceptance speech of the GOP VP nomination on Wednesday night, Indiana Governor Mike Pence labeled Clinton to be the “Secretary of the status quo.” This is a perfect description of someone who will offer nothing new to a country in desperate need of new leadership. Donald Trump is the change agent America needs, while Hillary Clinton is a stale and failed politician from yesteryear.

If elected, Clinton will be a tool of the special interests, Wall Street and the power brokers in the Democrat Party. If Trump is elected, he will be an independent leader answering only to the American people.

The choice is clear, and the stakes are extremely high; the status quo or change; continuing down the road to socialism or reversing course and embracing capitalism; saving our country from terrorism, illegal aliens, and criminals who target police officers or moving the country toward more lawlessness and chaos?

Hopefully, the American people will choose well in November. It may be our last chance to save America.