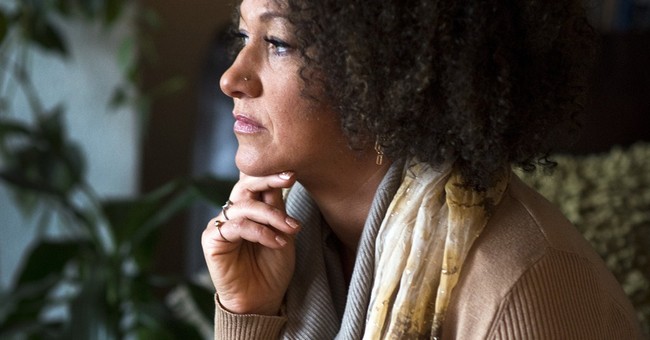 The events of Rachel Dolezal and “Caitlyn” Jenner are classic textbook case studies in the intellectual and moral incoherence of the contemporary leftist/progressive worldview.

Dolezal is a biologically white person who has spent years passing herself off as black. She continues to self-identify as black.

Jenner is biologically male, but self-identifies as female.

In both instances, one hallmark idea of the left figures centrally. This is the notion of human malleability, the idea that there is no hard, stable nature or “external world,” as philosophers call it. The only “reality” with which we’re familiar is a “social construction” that, as such, can be “deconstructed.”

The sky’s the limit.

Some questions and comments for the left:

(2) For all of my lifetime, leftists, especially black leftists, have charged such black conservatives as Clarence Thomas and Thomas Sowell (to name but two) with being “oreos,” i.e. white men trapped in black men’s bodies. Bill Clinton was heralded by some notable blacks as America’s first black president. Biracial celebrities like Barack Obama and Halle Berry, in spite of having been abandoned by their black fathers and raised by their white family members, and in spite of having lived a fairly privileged existence, insist upon self-identifying as “black.”

In other words, the words and actions of leftists all point to one conclusion: Particularly in regard to “blacks,” race is not only—maybe not even—fundamentally biological. Ideology or culture has at least as much, and probably more, to do with being black than mere physical reality.

Besides this, don’t leftists insist that “race” is just a social construct, that there are no races save the human race?

So, why should anyone who accepts any of this have problems with Dolezal identifying herself as black?

(3) Gender, like race, is also a social construct, according to leftists. This, I suppose, is why the rest of us have been lectured on the need to accept at face value Bruce Jenner’s claim to being a woman, irrespective of all of the physical evidence to the contrary.

At the same time, though, doesn’t this line about the socially constructed nature of gender identity actually contradict the idea that Jenner is, by nature, a woman inhabiting a man’s body?! If there is nothing natural about gender—if the body is just an external trapping—then there is no reality underneath the surface, right?

And if gender roles are in principle the products of time and place, then isn’t it so that in self-identifying as a woman because, for example—and this is the only example that he’s given for his claim to really being a woman—Jenner enjoys dressing in women’s clothing, that he proves just how confused he is on this question? Doesn’t he prove that, far from being an icon that promises to advance the cause of the trans-gendered community, Jenner is a retrograde that threatens to plunge us back into the bad old days when it was held that there really are women’s and “men’s” clothing?

(4) A colleague of mine expressed the standard leftist objection to Dolezal’s self-identifying as black when he argued that, not having been born with a black body, Dolezal can’t relate to and, hence, shouldn’t be able to capitalize upon the suffering that those with black bodies have historically had to endure in America.

However, for a very long time, the left has been making similar assertions regarding women. Women, we are constantly assured, are as well victims of centuries and millennia of male patriarchal, sexist oppression.

Well, this being so, isn’t it unjust for Bruce Jenner to capitalize on the suffering that being a woman invites? After all, given that he/she has lived as a man for some 65 years, Jenner has never had to endure the indignities and hardships, the exploitation, to which women are regularly subjected. Thus he can’t relate, can he (or she)?

If the rest of us are having a tough time keeping up with left’s worldview, we should take comfort in the fact that we are not the problem.

The problem is the left’s worldview itself.

Of a piece with the Rousseauian moral ideal of “authenticity,” the characteristically leftist theme of “self-expression” also pervades the stories of Dolezal and Jenner.