Questions on Baltimore for Democrats and Republicans 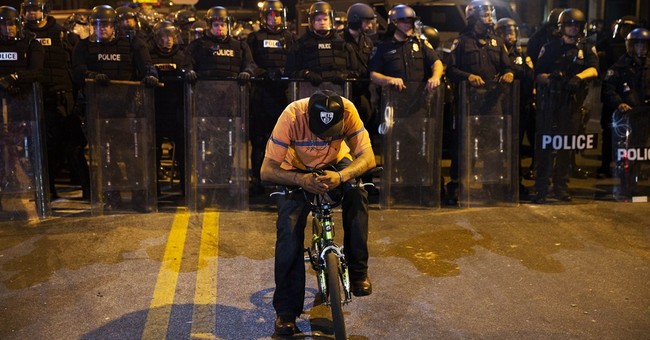 A look at media double standards in covering black criminality

In light of the latest Baltimore conflagration—that’s right, as Colin Flaherty, among others, have noted, mass violence and the destruction of property is par for the course in predominantly black cities like Baltimore—I offer some thoughts.

First, all too predictably, the usual suspects on the left are busy accounting for the barbarism of Baltimore’s rioters in terms of their “root causes” of choice: “police brutality,” “racism,” “the system,” etc. Contrary to what your senses tell you, so goes this line, it is not the young blacks wreaking havoc in the streets who deserve blame for their actions. In fact, these young blacks, like their older counterparts, are actually victims, the products of said “root causes.”

(a)Why, though, do these same apologists for black pathology concern themselves with “root causes” only when it comes to explaining the awful conduct of certain groups of people? For instance, while “root causes” are forever being introduced to account for the horrible behavior of blacks, no one—well, at least not any “roots causes” fundamentalists—ever thinks to go in search of the “root causes” of, say, “white racism,” or white-on-black slavery, or male-on-female domestic abuse, rape, or “gay bashing.”

But why don’t the Obamas of the world apply the same rule to, say, discussions of slavery? The overwhelming majority of white Americans during the era of slavery never owned slaves, and no white person today has ever owned a slave. If a handful of black thugs shouldn’t reflect poorly on the majority of the black protestors with whom they’re associated, then a handful of white slave owners shouldn’t reflect poorly on any other whites.

Neither should the proponents of Jim Crow segregation of yesteryear be permitted to reflect poorly on the vast majority of whites who never had anything at all to do with it.

Neither should a few bad police officers be allowed to reflect poorly on the vast majority of law abiding officers.

Thirdly, but it isn’t only leftists who search for “root causes” to explain black immorality. Republican politicians and media commentators do so as well—even if their “root causes” differ from those of their Democratic counterparts.

GOP-friendly pundits routinely castigate the left for applying double standards to blacks and whites. Yet the accusers are no less guilty than the accused on this score. Hence, in the wake of black riots (and black dysfunction generally), such commentators can be counted upon to talk about “fatherless homes,” “liberalism,” “the Welfare State,” and “the Democratic Party” as the “root causes” behind it all.

Here they are the mirror image of their political opponents.

(2)The obscene levels of illegitimacy among blacks are certainly harmful to those legions of poor black children that grow up without an intact family unit. But the question that Republicans never ask is: Why do so many black men act as impulsively and recklessly—as immorally—as they do in loving and leaving both the mothers of their children and their children?

Moreover, why do so many black women act as impulsively and recklessly—as immorally—as they do in having children with unreliable, irresponsible men?

(3)Imagine if it wasn’t black Americans in the streets of the Baltimores and Fergusons of the country, but Arabic immigrants chanting to Allah, etc. Or imagine if it was the images of Middle Eastern Muslims in Egypt, Iran, Iraq, or Israel that flashed across our television screens, Muslims in their own lands acting as our black rioters are acting right here at home.

Would our conservative pundits then be inquiring into such matters as the state of the families from which these Muslims hail? Would they then be blaming policies for the actions of the thugs?

We know the answers to these questions.

A Facebook friend of mine, upon posting a photograph of a horde of black criminals destroying a police car on a garbage-strewn street in Baltimore, commented that had these been foreigners, we would, without hesitation, view them as “terrorists.” And those on the radio and television airwaves who endlessly talk about “confronting evil” vis-à-vis militant Muslims, scarcely mention evil when analyzing the scandal of black criminality.

Of course, it doesn’t take a genius to figure out why.

However, until they overcome this paralyzing fear of being charged with “racism,” the Baltimores of America will continue to burn.