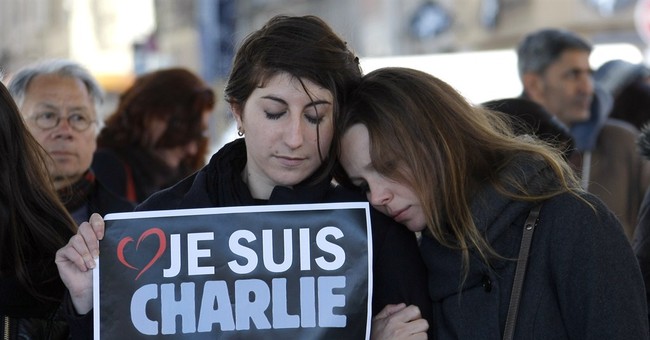 The latest event in France has elicited an array of responses from politicians and commentators here in America. For now, I’d like to focus on the single judgment that everyone from across the political spectrum seems to share:

Whether “conservatives” or “liberals,” Republicans or Democrats, “rightists” or “leftists,” etc. all seem to agree that the murderous attack by three Muslims against the staff of the satirical magazine Charlie Hebdo—as well as two police officers—was a terrorist attack.

Yet it’s not so clear that this is the appropriate adjective to apply in this context. And if we are going to come to terms with the Islamic threat, we had better be accurate in our use of terms.

The vermin responsible in this case were most definitely Islamic, and they were most definitely driven to massacre by religious conviction (Those, like Howard Dean and Fox News’ Shepard Smith, who insist otherwise are either dishonest or ignorant. But whether their vice is intellectual or moral, it is scandalous).

However, just because Muslims murder in the name of Islam does not mean that they are terrorists. Nor do the facts that their murderous activities are aimed against innocent civilians and induce a sense of “terror” within the targeted community (and beyond) mean that they are “terrorists.”

For decades, both governments and civilians have recognized that between terrorists and ordinary criminals there are significant differences. A terrorist, it has traditionally been thought, is someone who uses deadly violence for political purposes. More specifically, the terrorist employs (seemingly) random, (usually) indiscriminate violence for the sake of forcing a government to change its policies.

The latest attack in France was not aimed at a government. It was a response to a specific action—the publication of cartoons and comments mocking Muhammad—taken not just by a private organization, but by specific cartoonists, those cartoonists who the killers called out by name. It also bears noting that at least one of the killers had a criminal record.

He was a petty street thug.

If the Muslims who stormed Charlie Hebdo are terrorists, then even more so are the legions of black criminals who, since the Michael Brown and Eric Garner cases, have been wreaking “terror” on the streets of American cities. Those who our brave souls in the media routinely describe as “protestors” and “demonstrators” have targeted innocents by way of firebombing their businesses and assaulting them. Police officers, too, have been the subject of sometimes murderous attacks. These acts of violence against civilians are at least designed to alter government policy (law enforcement). As such, even if we shouldn’t refer to them as acts of “terrorism,” the fact remains that they are much more deserving of the “terrorist” label than are the shootings carried out in France this week.

Two notes on which to close:

First, there is no doubt that, ultimately, the logic of Islam accounts for violence of the sort on display in France—and all over the world. But not all instances of Islamic bloodshed are instances of Islamic terrorism. To use the “terrorism” label indiscriminately certainly serves the ideological interests of those invested in powering a foreign policy centering in a “War on Terror.” But otherwise, it blinds us to just those real-world distinctions that we need in order to see our way through this “clash of civilizations.”

Second, those who spare no occasion to unequivocally decry outbursts of Islamic violence abroad—men like Peter King, Congressman from New York, who alluded to the Charlie Hebdo murders as proof that we need closer scrutiny of Muslim communities in America—reserve not a fraction of this same outrage for the wanton violence of black violence here at home.

Ideology and hypocrisy promise to handicap, even exacerbate, efforts to combat most problems, but all the more so a problem as serious as that of Islamic violence.