Humberto Fontova
|
Posted: Jun 01, 2019 12:01 AM
Share   Tweet
The opinions expressed by columnists are their own and do not necessarily represent the views of Townhall.com. 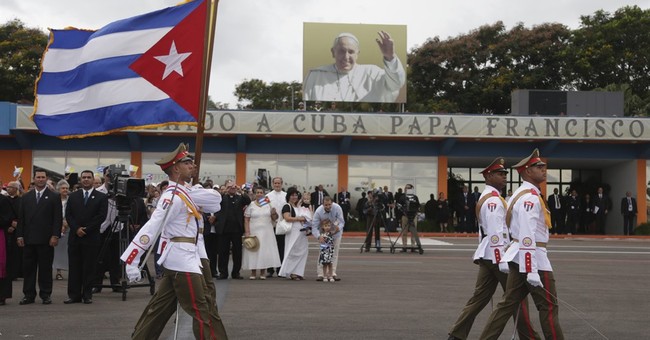 “Pope Francis warned against a rise of intolerance and racism as far-right nationalists and eurosceptic parties made historic gains in European elections…"The signs of meanness we see around us heighten our fear of 'the other', the unknown, the marginalised, the foreigner," he said in a message for the World Day of Migrants and Refugees,” France24.com reports.

“Pope won’t meet with Italy’s Salvini because of his position on migration— Two Italian publications reported that Deputy Prime Minister Matteo Salvini “has attempted to secure a papal audience and been rebuffed each time…Salvini had been told ‘a meeting could not occur if Salvini continues in his tough position regarding migrants,” according to CatholicCulture.org.

But perhaps my term “slobbers over” strikes some of my amigos as inappropriate? As unnecessarily hyperbolic? Perhaps even as sacrilegious?

Fair enough. Perhaps you have a point. Now please study Pope Francis’ face in these (undoctored) pictures and film clips from his visits to Cuba—then decide for yourselves.

Also note that Pope Francis denounces “meanness.”  Do firing squad murders of thousands upon thousands of untried victims, many of them yelling love of the Pope’s church with their last breaths, qualify as “meanness?

“The defiant yells (“Viva Cristo Rey!”—“Viva Cuba Libre!”-“Abajo Comunismo!”) from the bound and staked martyrs “would make the walls of La Cabana prison tremble!” wrote eyewitness to the slaughter, Armando Valladares, who suffered 22 torture-filled years in Castro’s prisons and was later appointed by Ronald Reagan as U.S. ambassador to U.N Human Rights Commission.

Given their valiant defiance even during their last seconds alive, by mid 1961 the mere binding and blindfolding of Castro and Che Guevara’s young murder victims wasn’t enough. Pope Francis' gracious Cuban hosts then began ordering that the Catholic youths also be gagged. The shaken firing-squads demanded it. The yells were badly unnerving to the trigger-pullers, you see.

So now, as the fine folks who hosted Pope Francis in Cuba yanked the young Catholic heroes from the cells, bent their arms back, and bound their hands, two more Communist guards came into play. One grabbed the struggling victim’s hair and jerked his head back, trying to steady him. The other taped his mouth shut.

Raul Castro and Che Guevara (whose visage formed the backdrop for Pope Francis' mass in Cuba) were the most notorious executioners during the early years of the Cuban Revolution. The orders, of course, all issued from the late Fidel Castro, who Pope Francis went out of his way to visit and smilingly hob-nob with after the Mass, profusely thanking him for his efforts towards “world peace.” (I am NOT making this up!)

“I am not Christ or a philanthropist,” wrote Che Guevara in a letter to his mother. “I am all the contrary of a Christ--In fact, if Christ himself stood in my way, I, like Nietzsche, would not hesitate to squish him like a worm.”

"The facts and figures are irrefutable. No one will any longer be able to claim ignorance or uncertainty about the criminal nature of Communism," wrote The New York Times (no less!) about The Black Book of Communism. This “irrefutable” study on Communism’s crimes was edited by the head of France’s National Centre for Scientific Research, Stephane Courtois (not exactly an embittered dispossessed Cuban exile) and translated into English by Harvard University Press (not exactly a subsidiary of the John Birch Society.)

This impeccably high-brow scholarly study found that Castro and Guevara’s firing squads murdered between 15,000 and 17,000 Cubans, the equivalent of almost half a million executions given the U.S. population. Some more perspective: the UN, (the same United Nations that proudly features Cuba on its Human Rights Council, by the way) charged former Serbian dictator Slodoban Milosevic with “genocide” for ordering 8,000 executions.

And far from any of the repentance the Catholic Church supposedly requires for forgiveness, the Castro brothers have always doubled--and even tripled-down--on their gloating for those thousands of murders, historically denouncing the young victims as “CIA mercenaries!” and “terrorists!”

None of this has prevented the Castro regime from receiving the most papal visits recently of any Latin America nation, equaling the number of papal visits to Brazil, with a population of 200 million, 130 million of them declared Catholics. In contrast, Cuba has a population of 11 million, only a tiny fraction of which are practicing Catholics. Someone’s got some serious “‘splainin” to do for this Papal fetish of constantly visiting Stalinist Cuba and chumming around with her Stalinist rulers.