‘Cause All I want for Christmas is: Bambi Fajitas 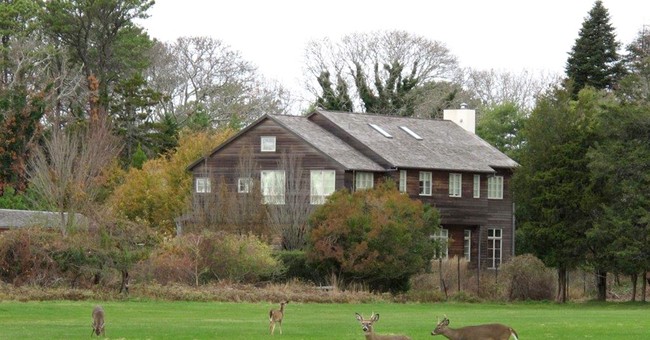 Winter’s here along with the usual reports of an epidemic of deer-car collisions in the northeast. Few such reports issue from Louisiana, or Dixie in general. An incident a few years back helps explains why so few deer "problems" bedevil us in Dixie.

The Louisiana Department of Wildlife put a plastic deer with luminous eyes beside a well-traveled bayou highway, planning to stake the place out that night and maybe nab some night-hunting poachers.

When they came back a little later for the actual stakeout, that deer was already ... remember Bonnie and Clyde at the end of the movie? Remember Sonny Corleone when they trapped him in that toll booth?

Well, they got off easy compared to this deer. Plastic deer confetti is what the agents found. The thing had been blasted to smithereens by every caliber bullet and conceivable projectile. We take our cuisine seriously down here.

So the game agents came back with another plastic deer, put it out and stayed this time. The agents reported, about half the vehicles – everything from pickups to limousines – stopped and had a go at the deer with armaments ranging from standard rifles to shotguns to pistols to crossbows. One guy charged it with a pocketknife, cheered on by his wife. Another guy was observed belly-crawling toward the deer clenching a tire iron! The game agents said they almost needed respirators on this fascinating assignment. Their midriffs ached for days.

I decided to cash in on this. My chum made me a custom deer stand that accommodates both me and my daughter Monica. We were in it the dawn after Christmas last year with the horizon already pink. Daylight seeped slowly into the creek bottom and the squirrels and birds came alive. It was nice – brisk but not frigid. No bugs.

... "This is Megyn Kelly reporting from Thibodaux, Louisiana. President Obama declared a state of emergency in the Bayou State where PETA was staging a demonstration against a local deer hunt. PETA's activists followed the hunters into the woods and employed bullhorns to broadcast the teachings of Mahatma Gandhi.

"This serves to enlighten the hunters in the ways of vegetarianism and non-violence," explained PETA spokesperson Paul McCartney, "and to frighten off, and thus save, the poor defenseless deer." With his right eye swollen shut and 21 stitches in his mouth, the ex-Beatle's appearance horrified his fans in the press.

"These blokes certainly take hunting seriously," Paul sputtered painfully into a spittle-flecked microphone held by a snuffling Katie Couric. "Nothing like this happened in New Jersey. Remember, friends, All You Need Is Love!"

"We came in the spirit of Gandhi!" blubbered PETA board member Bill Maher, who nursed a grapefruit-sized ear and several facial welts. "And were met by that of George Patton!" Mr. Maher then collapsed in sobs into the arms of his friend Alec Baldwin, who tottered at his side on crutches.

"Get up – UP!" Ellen De Generes and chum Rachel Maddow yelled while yanking Maher up by the collar and seizing Alec roughly by the shoulders. "You're lucky we ran those yahoos off! They'd a killed ya--ya wussies!”

"Meanwhile, at a local tavern, PETA activists Joaquin Phoenix and Woody Harrelson attempted to disrupt a cockfight by stepping into the ring itself.”The roosters immediately pounced on us!" stammered a still shaken Woody. "And I don't even eat chicken! And their owners incited them with bloodcurdling whoops and cheers!”

"Joaquin and Woody’s flailing arms and wild screams were scant protection against the birds' sharp spurs and vicious beaks,” reported a horrified Kelly. “Observers also report that rather than attempting to help the frantic and terrified victims, the few beer-crazed spectators who hadn't collapsed in hysterics quickly set several more roosters on the hapless celebrities, whose screams "sounded like Miley Cyrus sitting on a sea urchin," according to one howling and badly convulsed bar patron...."

Monica ducked and covered her ears. He was probably 80 yards away but obscured by too much brush. The head came up and I saw little sprouts of antlers. Great, he’ll be good and tender. I was breathing in gasps. He took another step and his shoulder cleared the tree. BLAMMM!!