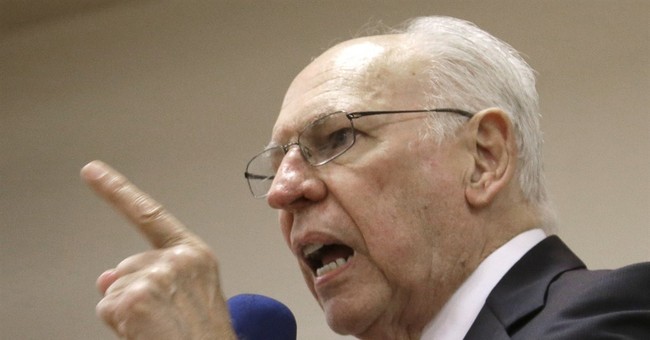 Ted Cruz’ father Rafael was not quite the anti-Batista rabble-rouser Ted claims in his book. So crows the New York Times this week in a major “expose’” titled: “Cuban Peers Dispute Ted Cruz’s Father’s Story of Fighting for Castro.”

Yes, just as he claims, at 18 the elder Rafael Cruz was arrested by Cuban (quasi) dictator Batista’s police and roughed-up for being an anti-government activist. But it wasn’t for gun-running, as he claims. And a (secret) Batista agent Rafael was trying to recruit to the Anti-Batista cause, didn’t snitch him out, as he claims.

Instead anti-Batista activist Rafael Cruz was arrested for possessing a gun–not for “running” it.

This constitutes the “red-meat scandal” trumpeted by the New York Times this week and picked up all over the MSM from Slate to the London Spectator.

(This same New York Times, by the way, was utterly silent in 2008 when a Democratic presidential candidate claimed his father (who in 1944 was 8 years old and a foreigner) had fought in the U.S. army during WWII.)

The sources and witnesses consulted and quoted by the New York Times to “debunk” Rafael Cruz were all (somehow!) located and brought to the attention of the New York Times in Stalinist Cuba itself. Most of them were eager to give their full names and pose for pictures.

But not a single caveat appears anywhere in any of the major media outlets gleefully trumpeting this story to the effect that this type of “sourcing” might be questionable for any of the following reasons:

*The totalitarian regime which feted this New York Times reporter prohibits its subjects from talking to foreign journalists without regime permission.

*Any and all journalists who request a visa to visit Stalinist Cuba are carefully vetted by KGB-mentored secret police (and then carefully tailed by them.)

*The U.S. Republican candidate besmirched by the sources (somehow!) located in Stalinist Cuba is a vocal opponent of the policy championed by the New York Times of circumventing the U.S. constitution in order to further enrich the Stalinist military clique that runs Cuba– and fetes New York Times reporters.

Not a single “intrepid investigative journalist” anywhere on earth adds a caveat that given any of the above items, the sources for the New York Times “expose” of Rafael Cruz could conceivably be suspect.

Such propaganda services by The New York Times for Castro’s Stalinist regime are reflexive after more than half a century of practice. “Fidel Castro has strong ideas of liberty, democracy, social justice, the need to restore the Constitution….but it amounts to a new deal for Cuba, radical, democratic, and therefore anti-Communist.” (Herbert Matthews, the New York Times, February 1957.)

“This is not a Communist Revolution in any sense of the term. Fidel Castro is not only not a Communist, he is decidedly anti-Communist.” (Herbert Matthews, the New York Times, July 1959.)

One day in May 1959, only five months after the triumph of Castro’s “anti-communist” revolution, Castro’s own Air Force Chief, Major Pedro Diaz-Lanz told his friend Eddie Ferrer, “I’ve got to tell the Americans and the world what’s going on here and start the fight against these communists. Everybody seems asleep!”

A week later Diaz-Lanz resigned his post and declared publicly that Castro’s civilian government was a hollow sham, nothing but a front (maintained with the then-invaluable assistance of the New York Times) for Soviet-trained communists who were running the show behind the scenes, especially in the crucial functions of the military and police. Diaz-Lanz then bundled his wife and kids onto a small boat and escaped to Miami just ahead of a firing squad.

Mr. SOURWINE: “But Fidel Castro has said on many occasions [as dutifully transcribed and transmitted by the New York Times] that he is friendly to the United States. You are saying that this is not true?”

Mr. SOURWINE: “You are completely sure that Fidel Castro is what?”

Major DIAZ: “That Fidel Castro is a communist. Also, I’m prepared because the communists have a well-known system of trying to destroy the reputations of anyone who disagrees with them.”

The following day Castro put his fingers to his mouth, blew a whistle and The New York Times scurried to duty: “In Cuba there are no communists in positions of control,” stressed their reporter Herbert Matthews in a fresh article. “The accusations of Major Pedro Diaz- Lanz are rejected by everybody.”

But as Diaz-Lanz warned, when outing communists, their denial is only half the story. The truth- teller must also be defamed. Castro whistled again.

“Sources (obviously Castro and his henchmen, exactly as in the Cruz case) tell me that Major Diaz-Lanz was removed from his office for incompetence, extravagance and nepotism,” added Herbert Matthews in his front page New York Times article on July, 16 1959 (the very day following Diaz-Lanz’ testimony!)

“To our American friend Herbert Matthews with gratitude. Without your help, and without the help of the New York Times, the Revolution in Cuba would never have been.” (Fidel Castro while pinning a medal on NYTimes reporter Herbert Matthews April, 1959)

“Much more valuable to us than military recruits were recruiting American reporters to export our propaganda.”(Che Guevara in his diaries.)