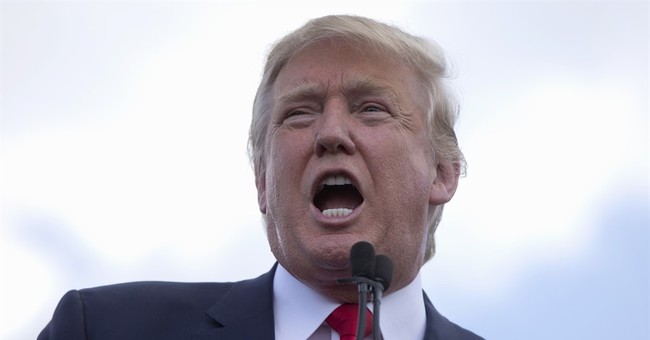 “We are all Mexican,” is the title of a forthcoming protest song produced by multi-Emmy winning Emilio Estefan and featuring his wife Gloria along with Carlos Santana, Shakira and other “Latino” musician luminaries.

Though billed as a protest (to Trump) song by much of the media, Emilio Estefan makes clear he’s more flower-child than street-fighting-man. “Trump doesn’t represent anything to me. Everyone has their opinion, and he can have whatever opinion he wants, as long as he doesn’t humiliate my people. (The song) is not so much an answer to the real-estate developer turned Republican candidate as it is an answer to the sentiment that we’ve progressed [as Hispanics] and we need to let people know that…I want to send a message that represents unity.”

Estefan also claims to have known Trump for “many, many years.”

You might have noticed that many of the most strident protestors at Trump events wear Mexican flags. Best we can tell they’re displeased with Trump’s proposal to provide them free return passage to their beloved homeland. Now we see American musicians of Cuban heritage (Gloria and Emilio Estefan) pulling a Rachel Dolezal–but instead of proclaiming themselves Black, they proclaim themselves Mexican. We live in interesting fascinating times.

That “unity” Emilio Estefan mentioned, by the way, was hardly reciprocated by his Mexican –American chum Carlos Santana’s during the 2005 Oscars awards. Strutting on the red carpet during the event the famed guitarist, who was on hand to perform the sound score for The Motorcycle Diaries, couldn't contain himself. He stopped for the photographers, smiled deliriously and swung his jacket open. TA-DA! There it was: Santana’s elegantly embroidered Che Guevara t-shirt. Carlos' face as the flashbulbs popped said it all. "I'm so cool!” said his face. “So tuned in!”

Tune in to this, Carlos: in the mid 1960's Fidel and your t-shirt icon set up forced-labor camps in Cuba for, among many others, "anti-social elements" and "delinquents." Besides Bohemian (Haight-Ashbury, Greenwich Village types) and homosexuals, these camps were crammed with "roqueros," who qualified in Che and Fidel's eyes as useless "delinquents."

“Work Will Make Men Out of You” read the sign above the camp’s gate, right next to machine gunners posted on the watchtowers. The entrance to Auschwitz’, on the other hand, read: “Work Will Set You Free. The initials for Castro and Che’s camps were UMAP, not GULAG, but the conditions were similar.

Many of the inmate "roqueros" were simply hapless Cuban youths who tried to listen to Yankee-Imperialist rock music in Cuba. In brief, at the Oscars, Carlos Santana was grinning widely --and OH-SO-hiply! -- while proudly displaying the symbol of a regime that: made it a criminal offense to listen to music by Carlos Santana!

True, Santana didn't hit it big 'till Woodstock in 1969, at a time when Che had already received a heavy dose of the very medicine he gallantly dished out to hundreds of bound and gagged men and boys. This means the first inmates of his concentration camps were probably guilty of the heinous crime of listening mainly to the Beatles, Stones, Kinks, etc. But the regime Che helped set up kept up the practice of jailing "roqueros" well past the time Santana was hot on the rock charts.

A few years ago, a more recent roquero-victim of Castroite repression told Mexico’s Proceso magazine that, “in Cuba freedom is nonexistent. The regime demands submission. It persecutes all hippies, homosexuals, poets and free thinkers. It employs total repression against them.”

This “roquero” divulged the truth only because he’d managed to escape the terror-sponsoring, nuke-rattling, nation-prison whose co-founder and emblem Carlos Santana venerates. That escapees name was Canek Sanchez Guevara-- Ernesto ‘Che’ Guevara’s very grandson. The regime co-founded by his grandfather jailed and tortured Canek for the crime of trying to play some rock music unsanctioned by the Stalinist authorities. Carlos Santana might have profited from a “jam session” with fellow guitarist Canek Guevara, who passed away earlier this year.

You’d almost think this recording titled “We are all Mexican” was an event secretly planted by Trump’s campaign staff. I mean, here’s a “protest” against Trump’s proposals and among the headliners is a huge fan of a Stalinist who denounced Trump’s homeland as, “The great enemy of humanity!” and craved to nuke it.

"Against those hyenas (Americans) there is no option but extermination!” raved the terrorist Che Guevara in a speech in 1961.

“We will bring the war to the imperialist enemies’ very home!” he raved in another speech in 1966. “To his places of work and recreation. The imperialist enemy must feel like a hunted animal wherever he moves. Thus we’ll destroy him! We must keep our hatred against them (the U.S.) alive and fan it to paroxysms!"

"If the nuclear missiles had remained (in Cuba) we would have fired them against the heart of the U.S. including New York City," boasted Che Guevara to the London Daily Worker in November 1962. "The victory of socialism is well worth millions of atomic victims."

If Donald Trump or any of his staff are perusing Townhall today I offer the above suggestions for a campaign ad completely free of charge.