“Don’t Shoot!”— Michael Brown, You Were No Che Guevara 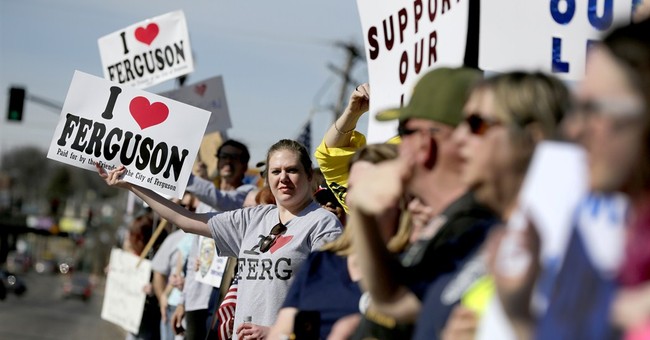 As usual, what many “racists!” and “haters!” (i.e. normal Americans) suspected about Ferguson from the get-go proved true. Michael Brown was a serial thug, thief and a dope-fiend who –rather than meekly surrender-- attacked his would-be captor in a manner (though not context) that would have gladdened the heart of George Patton. To wit:

“My men don't surrender!” General Patton harangued his fighters on June 5, 1944. “I don't want to hear of any soldier under my command being captured unless he has been hit. Even if you are hit, you can still fight back…The kind of man that I want in my command is just like the lieutenant in Libya, who, with a Luger against his chest, jerked off his helmet, swept the gun aside with one hand, and busted the hell out of the Kraut with his helmet. Then he jumped on the gun and went out and killed another German before they knew what the hell was coming off. And, all of that time, this man had a bullet through a lung. There was a real man!”

The 6 month-long report from the Department of Justice confirms what Ferguson police officer Darren Wilson claimed all along: Michael Brown charged him, punched him and reached for his gun.

“There was a real man!” some of Michael Brown’s homeboys might whoop.

It’s doubtful, however, that Patton’s non-surrendering soldier had 12 nanograms of Delta-9-THC (the primary psychoactive ingredient in pot) in his bloodstream when resisting capture, as toxicology tests proved about Michael Brown.

All this brings us, as usual in my case, to Che Guevara. What caught the eye of many Cuba-watchers back in August was how some pro-Brown demonstrators in Ferguson—on top of chanting “Don’t Shoot!”—wore Che Guevara T-shirts.

Now, when a comedian‘s “brilliant” witticism bombs he'll often complain to the "dumb" audience that: "The irony is lost on you people!" It is in this spirit of “lost irony” that I give you these demonstrators. To wit:

Upon his very first (and very brief) experience with something properly describable as combat, the world’s most celebrated “guerrilla fighter” (i.e. the icon on these Ferguson demonstrators T-shirts) actually snuck away from the firefight, crawled towards the Bolivian soldiers doing the firing—then as soon as he spotted two of them at a distance, stood and yelled: "Don't Shoot! I'm Che! I'm worth more to you alive than dead!"

On his second to last day alive and under hot pursuit by Green-Beret-trained Bolivian soldiers, Che Guevara ordered his guerrilla charges to give no quarter, to fight to the last breath and to the last bullet. “Che drummed it into us,” recalls Cuban guerrilla Dariel Alarcon, who indeed fought to his last bullet in Bolivia, escaped back to Cuba, defected, and today lives in Paris. “Never surrender,” Che always stressed. “Never, never!” He drilled it into us almost every day of the guerrilla campaign. “A Cuban revolutionary cannot surrender!” Che thundered. “Save your last bullet for yourself!”

With his men doing exactly that, Che snuck away from the firefight, crawled towards the Bolivian soldiers doing the firing—then as soon as his he spotted two of them at a distance, stood and yelled: "Don't Shoot! I'm Che! I'm worth more to you alive than dead!"

Learning of Che’s whimpering capture with fully loaded weapons after his sissified escape from the firefight started Alarcon’s long road to total disillusionment with Castroism.

His captor’s official Bolivian army records that they took from Ernesto “Che” Guevara: a fully-loaded PPK 9mm pistol. But it was only after his (obviously voluntary) capture that Che segued into full Eddie-Hasquell-Greeting-June-Cleaver-Mode. "What's your name, young man?!" Che quickly asked one of his captors. "Why what a lovely name for a Bolivian soldier!"

"So what will they do with me?" Che, obviously desperate to ingratiate himself, also asked Bolivian Captain Gary Prado. "I don't suppose you will kill me. I'm surely more valuable alive....And you Captain Prado!" Che commended his captor. "You are a very special person! ...I have been talking to some of your men. They think very highly of you, captain!..Now, could you please find out what they plan to do with me?"

From that stage on, Che Guevara’s fully-documented Eddie Haskell-isms only get more uproarious (or nauseating.)

On the other hand, Stephen Soderbergh’s movie “Che” shows Guevara steely-eyed and snarling with defiance during his capture. Why, according to Soderbergh, only seconds before his capture, Che’s very M-2 carbine had been blasted from his hands and rendered useless by a CIA-Fascist machine gun burst!

Then the bravely grimacing Guevara jerks out his pistol and blasts his very last bullets at the approaching hordes of CIA-Fascist soldiers!

Fine, but just where did Soderbergh and Benicio Del Toro (who starred as Che and co-produced the movie) obtain this version of Che’s capture? Well, the notoriously skeptical towards U.S. businessmen (see Erin Brockovich) director Steven Soderbergh transcribed this sterling account of Che’s capture exactly as penned by Fidel Castro, who apparently cannot tell a lie, according to Hollywood.

And oh!…here’s another item the Ferguson demonstrators may have overlooked: “The negro is indolent and lazy, and spends his money on frivolities and drink.” This comes straight from Che Guevara’s diaries, better known subsequently as The Motorcycle Diaries. But for some reason Robert Redford saw fit to omit this charming observation from his charming movie on the young Ernesto Guevara.