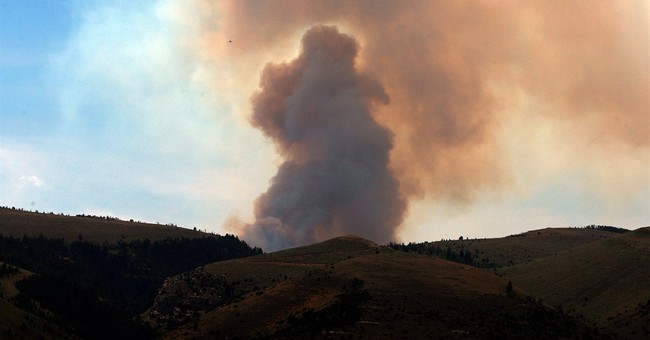 This year it’s the sight of thousands of firefighters, police, political dignitaries and others gathered for a memorial service for 19 firefighters killed in a single deadly incident. Last year it was images of more than 34,000 people being forced to flee their homes before walls of flame from 12 separate fires, once again in Colorado. Year after year it seems the news is flooded with tragically horrific stories of wildfires during the spring and summer seasons that burn millions of acres, destroying property and costing lives. And year after year politicians like Senate Leader Harry Reid (D-NV) pontificate about climate change as the cause of wildfires – shame on them!

Wildfires are an entirely natural phenomenon. However, the size, intensity and harm caused annually by the past two decade s’ forest fires have been greatly enhanced by human activities and inactivity – federal mismanagement of our national forests are to blame. The success of the Smokey the Bear program over multiple decades of suppressing wildfires resulted in overgrown forests. The simple fact is, when forests aren’t allowed to burn periodically, fuel -- trees and brush – builds up which results in more fires burning at hotter temperatures. By-contrast, Pre-Columbian forests were intensively managed by Native Americans in the East and Northwest who used fire and timber harvesting to manage wildlife populations, provide building materials, and allow farming. The great herds of migrating Buffalo and the regular burning of the plains, both natural and set by Native Americans, provided new grass for the bison and suppressed most tree growth on the Great Plains and plateaus of the Mountain West.

In fairness, fire suppression is not the sole cause for the current state of affairs. Too many trees, too much brush, and bureaucratic regulations and lawsuits filed by environmental extremists also are to blame. Since President Reagan, administration after administration has overseen a rapid decline of logging in the national forests along with thousands of miles of logging road closures (making it difficult to reach fires with equipment and enough manpower). Over the past two decades, timber harvests in the 155 national forests have plunged 80 percent from 12 billion board feet per year in the 1980s to less than 2.4 billion board feet per year. The result is unnaturally dense underbrush and tree growth – prime for fueling more intense wildfires at a rapid rate. Historically, large ponderosa pines in the Western national forests grew in stands of 20 to 55 trees per acre; today they grow in densities of 300 to 900 trees per acre. National forests in California have an estimated 10 to 20 times more trees than is "natural" — making them dangerously overcrowded.

Twenty years ago, a wildfire exceeding 100,000 acres was deemed to be catastrophic. Today, such large-scale fires are the rule rather than the exception. In 1998 there were more than 81,000 wildfires, burning some 1.3 million acres nationwide [?]. But in 2007, nearly 86,000 fires burned well over nine million acres. By 2011, more than 74,000 fires left 8.7 million acres in cinders – below 2007’s amount but still well above the average. Today, the U.S. Forest Service estimates that more than 190 million acres of public land are at risk of catastrophic fires, including 60 percent our national forests.

Overcrowding exacerbates the devastation by changing the nature of the fires themselves. Forests lacking active management, including logging, facemore high-intensity/high temperature fires that destroy the trees, saplings, seeds and microbes in the soil itself. Overcrowded conditions are aggravated by years of drought, insect infestations and disease, adding to the severity of fires.

Decades worth of excessive fuel, and thus the fire hazard, can be reduced in four ways. First is to use mechanical thinning of vegetation and logging. Second, implement managed “controlled” burns which, the Los Alamos fires of 2000 taught us, are inherently risky unless there has been some logging of the site before the fires are set. Failing to choose one of these options leaves only the “Burn Baby Burn” option that we are currently witnessing.

[Is this the third option?]There is, fourth, more radical response to the problem of forest mismanagement – end federal ownership or control over all but the most sensitive, environmentally unique public lands. Many, and perhaps most, of the problems detailed above could be remedied by applying ownership principles to the management of national forests. There is no compelling reason to keep properties that are not environmentally unique or significant in the public domain, rather than sell them to private parties (individuals, companies or nonprofit organizations).

Surely as an experiment, the United States can safely and perhaps profitably sell some of the hundreds of millions of acres of federal land. For example, portions of national forests could be sold for market value. If there is one private owner of land abutting the property, it could first be offered to that owner for continuity of management. If that landowner is not interested or the forest abuts state lands or multiple private properties, it could be auctioned to the highest bidder.

Forest product companies, sportsmen's clubs and environmental groups would likely buy certain forested lands. Undoubtedly the range of interests bidding on the forests would be limited only by location, access and the imagination of the bidders. Some of these lands will likely be developed. And while they will no longer be public forests, many and perhaps most will be managed in ways that protect their natural character because forest companies have an incentive to manage their forests in sustainable ways, which enhances both their environmental and economic value. Unlike the federal government, private companies do not have the general treasury to bail out money-losing operations and therefore do not build uneconomical roads in ecologically fragile areas to cut down uneconomical trees. Furthermore, privatizing public lands would have the additional benefit of improving the tax base in rural areas and reducing the strain on the federal budget.

Private property owners have flexibility in managing their lands, whereas federal forest management is too often hampered by rigidity. For example, when a wildfire struck near Storrie, California, in August 2000, more than 55,000 acres burned, mostly in the Plumas National Forest (28,000 acres) and Lassen National Forest (27,000 acres). Also burned were about 3,200 acres of private forestland managed by W.M. Beaty and Associates. However, the responses of Beaty and the Forest Service couldn't have been more different. By 2001, Beaty foresters had:

· The Forest Service removed dead trees and other fuels from only 1,206 acres and replanted 230 acres in the Lassen National Forest.

· In the Plumas National Forest, the Forest Service was prevented from removing dead trees and reforestation occurred on only 181 acres.

This comparative result is common.

Our forests, those who live near them, those who fight the fires, and the public who use the forests and pay the bills, deserve a forest policy that places public safety, economic well-being and fiscal responsibility above the flawed ideal of “letting nature take its course.” It’s time for the Government to stop fiddling as our forests burn, and tend to the public good. It must increase and expedite logging with vital reforestation programs, especially in forests where more standing timber is dead or dying than growing.