Over his twelve years in the U.S. House of Representatives, Congressman Howard P. “Buck” McKeon has proven to be a vocal advocate for preserving Social Security, cutting the national debt, providing tax cuts for America’s working families and strengthening the military.

First elected to represent the 25th Congressional District of California in 1992, Rep. McKeon has earned a reputation as a leader in the national education reform movement. Because of this, McKeon was elected by his colleagues to serve as Chairman of the House Committee on Education and the Workforce in 2006 to replace Rep. John Boehner (R-OH) who was required by House rules to resign his committee assignment upon becoming House Majority Leader.

Prior to becoming Chairman of the Education and the Workforce Committee, Rep. McKeon headed the House Subcommittee on 21st Century Competitiveness, with jurisdiction over higher education, technology in education, teacher training, job training and welfare reform. In this role, McKeon helped to negotiate the formula that resulted in interest rates for the student loan program dropping to the lowest level in the Federal Aid Program’s 38-year history.

Born Sept. 9, 1938, in Tujunga, California, Rep. McKeon grew up in the Tujunga area and graduated from Verdugo Hills High School in 1956. After serving a two-year mission for the Church of Jesus Christ of Latter-Day Saints, he attended Brigham Young University. After several terms, McKeon embarked on a temporary "hiatus" from his studies.

During this hiatus, Rep. McKeon married his wife, Patricia, began raising his family and started his career as a businessman in the Santa Clarita Valley. McKeon was soon involved in his community through such organizations as the Boy Scouts, Little League, the Henry Mayo Newhall Memorial Hospital Board and the Chamber of Commerce, among others. He subsequently returned to school and completed his bachelor’s degree in 1985.

Before coming to Congress, Rep. McKeon served on the William S. Hart Union High School District Board of Trustees from 1978 to 1987. During that time, the city of Santa Clarita was incorporated and its citizens selected McKeon as a member of the city council. It was during the city council’s first meeting that McKeon was chosen by his colleagues as Santa Clarita’s first mayor. During his tenure on the City Council, Santa Clarita expanded its sheriff’s and parks programs and earned a reputation as one of the safest cities in America.

Rep. McKeon’s legislative efforts have been recognized by several national organizations. He has been consistently recognized by The Watchdogs of the Treasury, the National Taxpayers Union and the U.S. Chamber of Commerce for his leadership in cutting Federal spending and reducing taxes. He has also been recognized for his advocacy of higher education issues by many organizations, among them, The National Association of Independent Colleges.

Rep. McKeon and his wife, Patricia, have six children and 28 grandchildren, and currently live in Santa Clarita. 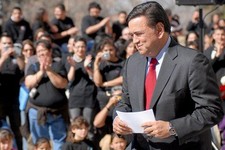