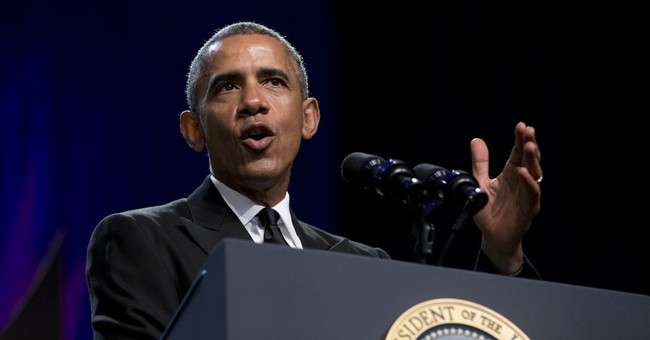 President Obama finally showed the world that he had the backbone to take on a powerful world leader this week. Unfortunately, his target was the Pope.

This week is one of those rare occasion when two world leaders will visit United States at the same time: Pope Francis, leader of the Catholic Church; and President Xi, the head of People's Republic of China. These two leaders couldn't be more different. I don't agree with Pope Francis' stand on climate change or his anti-capitalism rhetoric. But I admire his authenticity, conviction, humility and openness. President Xi, on the other hand, as the head of an authoritarian state, is secretive and enigmatic. Pope Francis inspires endearment, love and compassion; while President Xi, arouses fear.

Guess which one of the two leaders President Obama chooses to show contempt? For the Pope's welcome ceremony at the White House, Obama decided to spread his own progressive gospel to the Pope by inviting special guests such as transgender activists, the first openly gay Episcopal bishop and an activist nun who leads a group criticized by the Vatican for its silence on abortion and euthanasia. I have nothing against any of these individuals. But just like these people are entitle to their beliefs and life choices, Pope Francis and his 1 billion followers are entitled to their religious beliefs. Pope Francis already said "Whom am I to judge?" when he was asked if he approved of homosexuality. Why does President Obama feel the need to frontload his own progressive agenda and force a reaction from the Catholic leader in front of the world's media? I can't help wondering what if a Muslim Imam visited the White House instead of the Pope. Would Obama have the same guest list? Would he attempt to lecture any Muslim leaders on same sex marriages and equal rights for the LGBT community?

Furthermore, will President Obama invite the Dalai Lama as a special guest to the state dinner for President Xi? Will he demand an explanation from President Xi on why China's naval ships were patrolling in the Bering Sea during President Obama's own trip to Alaska? Will he inform President Xi that the U.S. will relentlessly prosecute any person or government who attacks American government agencies and American businesses in cyberspace?

Unfortunately, history shows us when it comes to dealing with dictators and authoritarians, President Obama isn't known for having a strong spine. "Leading from behind" has been his policy motto. He famously drew the red line with Assad in Syria and retreated. Now hundreds and thousands of Obama's refugees are flooding into the Continent of Europe on a daily basis. He ridiculed ISIS as the "JV team" and has done nothing effective to stop ISIS from spreading its global influence. Under his watch (or lack of), ISIS has established a jihadist caliphate in the heart of the Middle East and has inspired worldwide terrorists attacks including in Europe and the U.S. Obama paid only lip service when Russia's Putin snatched Crimea from Ukraine. Now he is paying lip service again while Putin is sending fighter jets to Syria. Worst of all, Iran is on its way to become a nuclear power because President Obama will release more than $100 billion to Iran without even demanding "anytime and anywhere" inspections. Somehow Mr. Obama is tone-deaf to the Mullah's "death to America" chant.