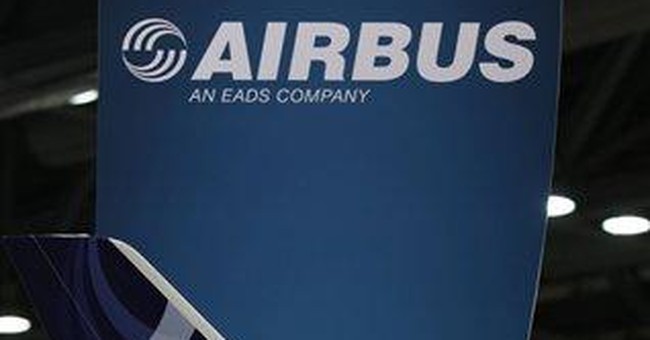 As a Republican, I am not usually in the business of offering President Obama useful political advice, but in this case, I am happy to let President Obama know about an opportunity he has to unite Republicans and Democrats behind a policy that would bolster our national defense and save American jobs.

Recently, the World Trade Organization (WTO) – which serves as the international referee in free-trade disputes –ruled on a case the United States Trade Representative brought back in 2006 against European Union (EU) governments for their illegal subsidies of France-based Airbus industries. France and the EU have pursued an industrial policy of propping up Airbus and its parent company with billions of dollars worth of risk-free, government-backed loans (known as “launch aid”). The EU’s expressed purpose of the Airbus subsidies is to knock American aerospace manufacturer Boeing off its number-one ranking as the world’s largest aircraft manufacturer.

The billions EU governments have poured into Airbus have effectively, if artificially, lifted Airbus up to a position as Boeing’s chief rival. The question for President Obama is: Will he allow such a blatant violation of free-trade rules to go unpunished, even when tens of thousands of American jobs may be lost as a result?

The most immediate threat to American jobs is the way Airbus is using its government subsidies to undermine Boeing in its bid for a $100 billion contract to build America’s next generation of Air Force refueling tankers – the aircraft that allow long-range and long-duration missions in Afghanistan and around the world. The current fleet is over 40 years old, and is in dire need of replacement.

In a fatally flawed bidding process last year that was later rejected by the Government Accountability Office, the Pentagon procurement office was forbidden to take Airbus’ trade violations into consideration. This lack of American seriousness only emboldened the EU, Airbus, and its American partner Northrop-Grumman to flaunt their power, and actually increase WTO-prohibited subsidies.

US Trade Representative spokeswoman Nefeterius McPherson has stated that “the commitment of [new] launch aid, or any other form of preferential financing, by any of the EU member states would be a major step in the wrong direction. … We want to resolve the problem of WTO-inconsistent aircraft subsidies, but the commitment of additional support would make that even harder to do.”

Does this signal a stiffening of resolve on Obama’s part? Will he hold the EU and Airbus accountable for their blatant free-trade trade violations? That’s the decision Obama faces.

Congress has set an October deadline for the Obama Administration to report back to them on the status of the tanker contract, specifically calling on Obama to consider the WTO’s decision.

If Obama cited the WTO ruling as a reason to exclude Airbus from the tanker competition, or demanded that the Air Force calculate the illegal subsidies into the price of the Airbus bid, he would save tens of thousands of American jobs, strengthen America’s defense, and unite Democrats and Republicans behind a serious policy that foreign countries must comply with the terms of our free-trade agreements.

If that’s not a great political opportunity for the President, I don’t know what is.