Erick Erickson
|
Posted: Mar 04, 2016 12:01 AM
Share   Tweet
The opinions expressed by columnists are their own and do not necessarily represent the views of Townhall.com. 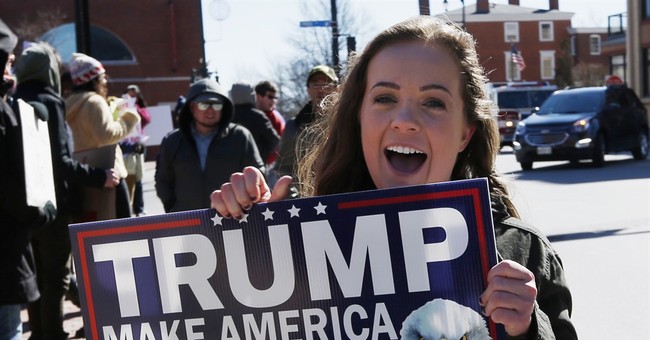 The United States has hit a pivotal moment. Throughout the country, while Washington elites have gotten rich off the system, the poor and middle class have seen their jobs and positions in life go stagnant. Harry Reid's family has done quite well off the Senator's time in the Senate, and Senator Reid himself now lives at the Ritz. John Boehner left the Speaker's Chair and will now make a very comfortable living in the private sector, trading on his ties and influence.

Washington thrives while America suffers. The Democrats promised to improve the lives of blue-collar workers, but instead began an aggressively regulatory campaign that saw coal miners out on the street, factories close and lives upended. Republicans promised to fight back, but never mounted much of a fight or held the president accountable. When Ted Cruz was willing to go the ultimate step to stop the president with a government shutdown, his Republican colleagues threw him under the bus as quickly as possible.

At the same time, progressive elites in this country have imposed a system of political correctness, shaming and punishing those who do not agree and demanding a one size fits all morality that looks to many people as immoral.

Neither party keeps its promises. Neither party has worked to improve the lives of those Americans struggling the most with disruptive changes to the economy. Liberal and conservative thinkers have pitched white papers, but white papers do not feed families.

Into this mix comes Donald J. Trump, a man whose last name exudes success. Trump's name is plastered on buildings, he has a clothing line, he owns skyscrapers in New York and has his own private 757. Though not a self-made man, Donald Trump grew his inheritance into a company, and that company's chief asset is Donald Trump, the brand.

According to many analysts, Trump would actually be worth more today if he had just invested his money instead of spending it to grow his business. But Trump would never do that. Donald Trump wanted to create things, grow things and sell things. Investing would have been lazy. Donald Trump needed room to breathe and experiment. Sure, he lost money along the way, but Trump also made a lot of money.

Trump lost his money by failing to sell Americans on steaks, alcohol, gambling and football. Each of these businesses failed, making Donald Trump the most spectacular businessman in the United States. It is truly amazing that a man of his skills would fail at selling Americans steaks and football, let along gambling and alcohol.

Trump learned his lessons from those failures, however. He went on to start Trump University, where he made money. He made that money by convincing single moms, retirees, and those on hard times that they could make money learning from him. Many of these people are now suing Donald Trump for fraud. They say all they got was a picture with a cardboard cutout of Donald Trump. They went into debt and fell on even harder times in some cases.

Trump also made money lending his name to other's projects. When those projects failed and people lost their money, they realized Trump was not actually the project builder, he just lent him name to the project and built the perception he was more involved than he actually was.

In fact, Donald Trump has an amazing ability to make money by convincing others that reality is not real and Trump's lies are. Like a con artist swindling money from a widow by tapping into her sadness, Donald Trump now stands to make a fortune by tapping into the anger of many Americans who have long felt ignored.

Donald Trump will pay these angry Americans as much attention as possible to swindle them out of their future hopes as he has done to so many. Those voting for Trump have seen Washington betray them, which has set them up for the perfect con by a consummate con artist. Then in the ultimate con, Donald Trump will concede November to his friend, Hillary Clinton, whose husband encouraged Trump to jump into the Republican campaign for that very reason.