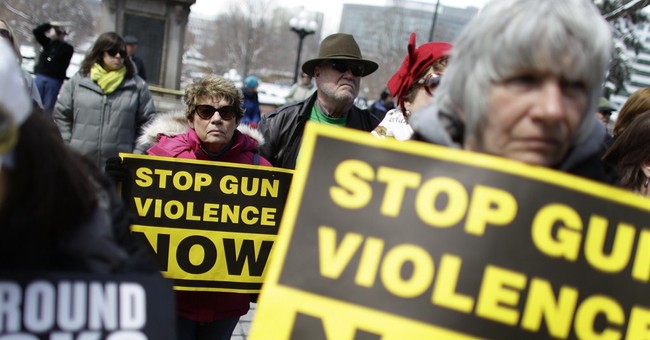 Last Thursday, as Americans were still coming to grips with the tragic rampage in Oregon, President Obama addressed the American people. An hour before the president spoke, news outlets were confirming that the shooter in Oregon had targeted his victims based on their religion.

Multiple eyewitnesses and relatives of the victims all said the shooter asked the victims to state their religion. Those who said "Christian" were shot in the head. Others were shot in the legs or other parts of their body. The president -- in 1,299 words -- never once discussed religious tolerance or even condemned the shooting. It is worth noting, at a minimum, that had the shooter or victims been Muslim, the president would have talked about religious tolerance.

Saying "this is something we should politicize," the president proceeded to call for more gun laws, though he could not name any that would have prevented the shooting. Instead, he cited "friends of ours, allies of ours -- Great Britain, Australia, countries like ours."

But what do those countries' gun laws look like? The president and the left wing media horde of editorialists and activists citing Great Britain and Australia give us our hint -- gun confiscation. Both countries have very tight bans on guns and have confiscated their citizens' guns. Australia raised a tax and used that money to buy back guns in Australia. Several studies suggest that the Australian gun laws did reduce gun related suicides, but only weakly at best improved the homicide rate.

In citing other countries, the president and the left also fail to reflect on our constitution. We do have a Second Amendment, which the Supreme Court has ruled gives an individual the right to keep and bear arms. A political army that demands unfettered access to abortions because the Supreme Court says they are legal has no qualms about ignoring the court when the army disagrees.

Concurrent to these -- thus far -- subtle calls for gun confiscation are calls for new laws. The left is pushing for a renewed assault weapons ban, which is more accurately called a "spooky weapons" ban; the ban just targeted guns that looked spooky. The original ban did nothing to stop the rampage in Columbine, Colorado. In fact, the guns restricted under the ban were not used in Columbine.

In the latest rampage, the assault weapons ban would also have been no good. Next, the left pivoted to background checks. Between the novel and creative talking points peddled by the left these days, the idea is that it is easier to buy a gun than to adopt a dog or even buy beer. The people peddling these talking points have clearly never tried to buy a gun. Additionally, some of the guns used in Oregon were purchased legally in a state with restrictive gun control laws, and background checks were performed.

Last month in Virginia, Gov. Terry McAuliffe raced to televisions everywhere to demand background checks for guns after a deranged gunman killed a reporter and her cameraman live on television. The gunman had purchased his gun legally and had a background check at the time of purchase.

In the United States, there is roughly one gun per person. The American cities with the worst gun violence, Washington and Chicago, also happen to have some of the most restrictive gun laws in the country, in contrast to Kennesaw, Georgia, which requires every homeowner in the city to own a gun. According to the website neighborhoodscout.com, Kennesaw sees 1.31 violent crimes per 1,000 people annually. Chicago sees nine and Washington sees 13.

The truth is that the United States and its attitude toward gun culture are unique. Instead of mimicking Australia and Great Britain with their gun confiscation programs, our leaders should think differently. The best gun control in this country is an armed, honest citizenry who can shoot straight. Instead of gun free zones, we should allow law abiding, concealed carry permit holders to go where they wish with their guns.

Luckily for gun owners, the more Democrats agitate for restrictive gun laws, the worse the Democrats do in polling. Beta male gun control policies may be winners on editorial pages, but are losers in our national electoral system.