The Mad Search for Pro-Trump Columnists

Emmett Tyrrell
|
Posted: Dec 15, 2016 12:01 AM
Share   Tweet
The opinions expressed by columnists are their own and do not necessarily represent the views of Townhall.com. 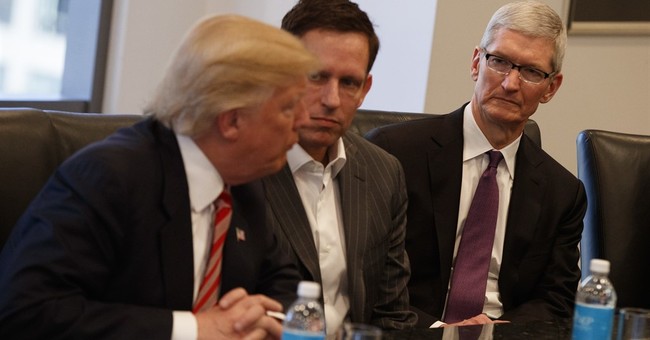 WASHINGTON -- Over the weekend some pathetic wretch -- obviously a casualty of the Nov. 8 election -- writing under the pen name Paul Farhi filed a column in the Washington Post lamenting that after an extensive search of the newspapers of this great country, he could hardly find any pro-Trump columnists. Actually, he could not find any, not even among the alt-right, the Ku Klux Klan or the Neo-Nazis with whom the Post has become so familiar during this election year. Apparently the pro-Trumpers are nowhere to be found.

Farhi went on to confect a comic want ad for the missing pro-Trumpers. Then he devoted roughly a thousand anguished words to his thesis, which said, "Major newspapers, from the Washington Post to the New York Times, have struggled to find and publish pro-Trump columns for months." Yes, he actually wrote "for months." He quoted editors from newspapers around the country, such as The Times' James Bennet and the Post's Fred Hiatt, insisting that they had struggled to find a pro-Trump columnist. He even quoted the head of the editorial department of the Republican-leaning Arizona Republic, Phil Boas, who said that many of the "traditional voices on the right" were not pro-Trump. The newspaper defied a 126-year record of endorsing Republican candidates to endorse Hillary Clinton. It could have done worse. The Chicago Tribune endorsed Gary Johnson, who when asked about Aleppo said, "What is Aleppo?" Conservative columnists were cited, among them Ross Douthat and David Brooks. But!

there were no pro-Trump columnists anywhere.

Now, allow me to submit Farhi's idiotic labors as still more evidence of an establishment in its terminal stages of decay. Thirty or more years ago, a similarly out-of-touch establishment derided those of us who disagreed with them on, say, supporting Ronald Reagan's candidacy or favoring peace through strength. But the present establishment goes beyond deriding us. It ignores us. It claims to be looking for pro-Trump columnists but can come up with not a single one. As F.H. Buckley, who actually writes a pro-Trump column for the apparently invisible New York Post, says, "The establishment still can't figure out what happened on Election Day." It got clobbered in 2010, 2014 and 2016, but it only remembers 2012, the year Americans could not turn their back on President Barack Obama's legacy -- though in 2016 they did.

If Farhi had taken the time to read these highly readable commentators, he would have come up with plenty of writers who were favorable, or at least serene, toward President-elect Trump. For instance, he would have come across Seth Lipsky at the New York Post, and William McGurn and the inimitable James Taranto at The Wall Street Journal. At the Good Times he would have met Wesley Pruden, Monica Crowley and -- dare I mention him -- me.

As a matter of fact, about the time Farhi was preparing his fantasy I was rereading my columns from the last few months, which were heroically published in the Washington Times, The American Spectator and various other places. Not only have I been writing a pro-Trump column but I also predicted Trump's ultimate victory in at least a half a dozen of them -- the last time one week before Black Tuesday, Nov. 8. Why doesn't Farhi have a good laugh at my expense?

In these columns I wrote about flying with Trump on his campaign plane and covering the campaign a la Teddy White. I weighed the numbers in the forthcoming race. I compared Trump's robust response to Clinton's feeble thrusts. In The American Spectator I also published writers who boldly spoke up for Trump, including Esther Goldberg, Jeffrey Lord, George Neumayr and, of course, Buckley. I even published anti-Trump pieces by such columnists as David Catron, Ross Kaminsky and William Murchison. Our readers can make up their own minds. If Farhi's editors wanted pro-Trump writers, they could have called me.

In his column, Farhi blubbers on about what he calls "fake" news, picking up a theme that has become all the rage with the establishment. Supposedly the lunatic fringe is spreading news of conspiracies in the press, and the right is especially susceptible. Well, I do not know about the right, but I have just written a column about the fake news that Farhi and his kind spread. We shall see what the journalism community does with it. I say they will ignore my claim that the New York Post and the Washington Times and The Wall Street Journal exist.