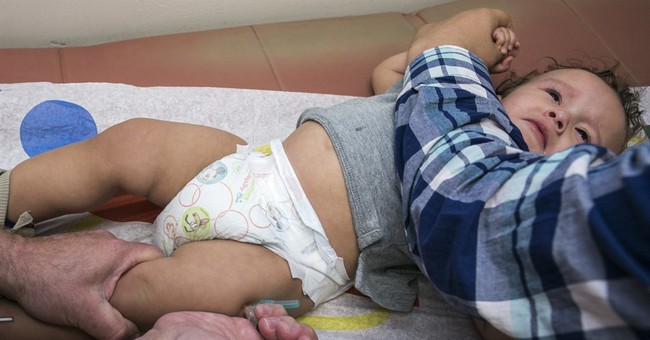 Trending
WASHINGTON -- Two potential Republican presidential candidates caused mild palpitations amongst the press corps this week in expressing their misgivings about state-mandated children's vaccinations. The press's concern could be a precursor of what Republican candidates might experience in the coming primaries. Ostensibly a mild outbreak in measles is the cause of the journalists' alarm.

Governor Chris Christie, speaking in the United Kingdom, and Senator Rand Paul, speaking on radio and TV talk shows, expressed their reservations about this public health policy. Christie called for "some balance of choice" between health officials and parents. Paul said most vaccines should be voluntary.

Christie comes from New Jersey where a small but vocal group of parents representing a higher than average statewide proportion of children suffering from autism blame vaccinations for their children's condition. Medical researchers claim vaccination is not a factor in childhood autism, and certainly I am persuaded by their research, but that is not Christie's point. A family's children, he believes, are the family's responsibility. Presumably, he also believes in home schooling and charter schools.

The scruples expressed by Paul, a senator with healthy libertarian tendencies, are almost wholly philosophical and have to do with the reach of government into our lives. He told CNBC, "The state doesn't own your children." He, an ophthalmologist, praised vaccines for their ability to prevent diseases like measles and chicken pox, but he reiterated, "Parents own the children. And it is an issue of freedom and public health."

The aroused press corps brought in the medical researchers, and naturally they were especially severe with Dr. Paul. Said Dr. Amesh Adalja, an infectious-disease researcher at the Center for Health and Security at the University of Pittsburgh, "When you see educated people or elected officials giving credence to things that have been completely debunked, an idea that's been shown to be responsible for multiple measles and pertussis outbreaks in recent years, it's very concerning." He paused to inveigh against on Dr. Paul.

Yet neither Christie nor Paul "gave credence" to questionable theories about the unhealthful possibilities of vaccination. Paul specifically stated that the vaccines were beneficial and he favored them. He added that he had seen to it that the vaccines were administered to his children though he "didn't like them getting 10 vaccines at once, so I actually delayed my kids' vaccines and had them staggered over time." His encouragement of vaccination did not win over the militant advocates of vaccination. Seth Mnookin, an MIT professor and the author of "The Panic Virus," disparaged both Christie and Paul as "incredibly, incredibly irresponsible."

So what would Mnookin have us do, send the National Guard into homes to make sure that children are vaccinated? Or would he take a page from President Barack Obama and impose taxes on reluctant parents? So far as I can tell, vaccinating the young against disease is not a major issue in America, but we could make it a major issue. Right now on the left the opponents of genetically modified organisms and chemicals like DDT are against vaccination. On the right are extreme libertarians. Both groups apparently do not believe the science behind vaccines. Yet Christie and Paul do. There is no reason for the mainstream media to be alarmed by them.

Ideally about 90 percent of students should be vaccinated to make vaccination effective, but still if vaccinations work as well as they are supposed to the only students that will become ill will be those who are left unvaccinated. They are to be concerned about, but they are their parents' responsibility.

On the other hand, to force vaccination upon everyone curtails a principle that enriches us all, personal liberty. Christie and Paul are doing precisely what they, as elected officials, should do: safeguard our freedoms. There is more to life in America than measles and chicken pox. There is freedom.