The Male of the Species (American) 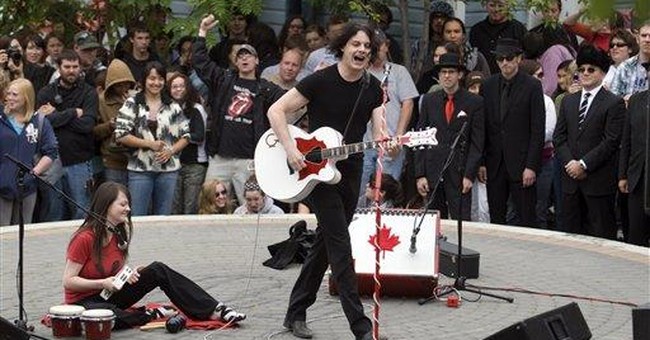 WASHINGTON -- In recent years when I have heard the ongoing dirge about the deficiencies of America's young men, I have had my doubts. The army that we have sent abroad to confront some of the most barbaric enemies Western civilization ever has faced is superb. Confronting savages -- usually on their own soil -- our forces have been professional to the utmost, the Wehrmacht but with democratic values! Withal, they are brave, spirited, manly.

As for my personal experiences with the men of the younger generation, I have found them for the most part to be first-rate: intelligent, diligent -- again -- manly. Admittedly, the cohort I have encountered is not vast. Most have been young writers or reporters or the young men introduced to me by my youngest daughter. As they were often young men in the service of her employer, Blackwater, their high quality is not surprising. All are retired special ops guys, and once the lurid canards about Blackwater collapse from lack of evidence, their bravery and devotion in protecting American diplomats will stand as another splendid chapter in American soldiering.

So, what is the evidence that the young men of the country are sub-par? Well, apparently they compose less than 50 percent of the college population. Why worry about that? Most universities are simply pretentious extensions of high school, presided over by a professoriate that is -- with heroic exceptions -- mediocre, tedious, ill-informed, bovine and anti-intellectual. Better it would be for young men to take a couple of years of business courses and join the adult world. Yet there apparently really is evidence that many young men are loath to join the adult world. The demographics suggest as much.

From an unexpected source, I recently got a sense of those demographics, namely, the ads televised during the Super Bowl. The clever minds that create those ads have obviously studied the characteristics of the audience they want to snare, which appears to be an audience of young men. All the ads I saw depicted young men who were stupid, giddy, neurotic and adolescent unto middle age. They were charmless, often dressed like schoolchildren and clueless as to any of the serious or sophisticated matters of life. All seemed to be the kind of lout who would break into a sweat trying to read, say, the Declaration of Independence or the language on a speeding violation. These are the kind of consumers many American corporations want to market their products to, though apparently their products are basically beer and junk food.

Often the Super Bowl ads depicted these patheticoes in humiliating states of catastrophe. One promoting a disgusting snack called Doritos -- an inescapable insult to Latin cuisine -- ended with a loutish young man wearing a dog collar and writhing on the ground, supposedly another exemplary Doritos customer. Would you buy Doritos if you were depicted in such an undignified way? Are sensible adult viewers supposed to conclude that because an obvious idiot adores Doritos, we will, too? I am told there is also a wave of films whose protagonists are such coarse and stupid louts. My moviegoing confidants speak of "Step Brothers" and "Knocked Up." Perhaps I shall order a copy of each if I am laid up long enough with the flu.

Now, every generation has its allotment of poor souls. Yet I can think of no generation that has cast the poor soul as the norm. In fact, there was a day when young men were seen as young gentlemen. They aspired to being intelligent, hardworking, interested in a variety of exacting pastimes: sports, the outdoors, music, reading. In its early days, Playboy magazine was marketed to just this sort of discerning young man, one interested in jazz, sports cars, what then passed for high-tech consumer goods, what are now called careers and, of course, women undraped. Believe it or not, in the 1950s and for a while thereafter, Playboy was an intelligent -- if amoral -- magazine. Today, of course, it is coarse and stupid. So maybe Playboy, too, is evidence of young American men's failings.

The pathetic young men depicted in the Super Bowl ads at least do not appear dangerous. Crapulent after a few beers and a sack of Doritos, they probably pass out and catch colds sleeping on park benches in their shorts and sandals. At some point a few years from now, they really will enter middle age, at least physiologically. Their sad condition will not inspire emulation. An even younger generation of men will aspire to manliness, and American history abounds with examples of manliness for them to imitate. Young women, do not despair! Help is on the way.