A Change of Heart at the White House? 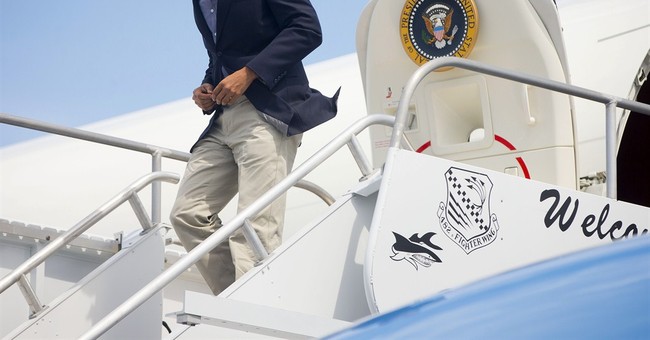 During today’s unscheduled press conference President Barack Obama responded to a wide range of questions varying from race relations in the United States to the Russian incursion into Ukraine. The president spent over an hour answering questions from the White House press contingent, offering the frankest assessment of his administration’s policies to date.

With regard to Israel the president came down strongly on the side of Israel and directed a stern warning against the Iranian regime in Tehran, advising the ruling mullahs that the United States stood shoulder to shoulder with Israel, our staunchest ally in the Middle East.

The president threatened Iran with massive military retaliation should any attack against Israel or Israeli interests anywhere in the world be traced back to the Islamic Republic. Obama added that any questions about the current state of the U.S.-Israeli relationship are ill-informed, the relationship “could not be stronger.”

President Obama went on to say, “My dear friend Bibi and I are on the same page when it comes to dealing with the challenges our two countries face with the Islamic Republic of Iran. The Iranian fanatics will not be allowed to obtain a nuclear weapon and we will take whatever steps, including military action, that are necessary to prevent this from happening. Iranian meddling around the world must and will come to end”.

The president added that Vladimir Putin needs to “take heed as well, our patience has come to an end,” referring to Ukraine. According to Obama, “Putin has overreached and misread the United States’ commitment to the Ukrainian people.” “We will not stand idly by while this former KGB thug threatens world peace”. “Pay day is coming” said the president.

The president acknowledged that the administration’s record on reducing racial tensions during his administration has been abysmal. Noting that this started as early as his first year in office when he rushed to defend Harvard professor Henry Louis Gates and accused the police of “acting stupidly,” when in fact the evidence clearly showed that Gates was the one who acted stupidly.

The president admitted that his comments were a knee-jerk reaction based on his deep-seated animosity toward law enforcement, and especially toward white police officers and white authority figures in general. A personal prejudice he must “work hard to overcome.”

Regarding Ferguson, Obama said that his biggest mistake was sending Attorney General Eric Holder to the Missouri community before all the facts were known. “It clearly sent a message that we believed the lies being told by those who only wanted to railroad an innocent police officer, and weren’t interested in justice at all.”

Taking it a step further the president added, “Actually, nominating Eric Holder to even be my attorney general was clearly one of my biggest mistakes.” “Holder was the wrong choice for so many reasons, but primarily his racist feelings towards white people should have excluded him from consideration”.

President Obama went on to say “Bringing Hillary Clinton in as secretary of state was also a lapse in judgement, she clearly accomplished nothing during her four years on the job.” “When the true story comes out about her failures and lies during the Benghazi attacks the American people will be calling for her to be thrown in jail, and certainly not elected as my successor.”

When asked about the situation in Iraq, Obama said, “I accept full responsibility for what has happened in Iraq. I clearly was foolish in not negotiating a Status of Forces Agreement and withdrawing our military, which has allowed all of these atrocities being committed by ISIS to occur.” “You can’t blame Bush for this one, the responsibility rests solely on me,” added the president.

President Obama also commenting on the state of the U.S. military said, “For that matter my social experimentation with the military was a huge mistake. There was nothing wrong with the ‘Don’t Ask Don’t Tell’ policy that was in place. I should have known that you just don’t mess with the best military in the world, and I shouldn’t have tried to fix something that wasn’t broken.”

When asked about what he planned to do for the remainder of his term the president indicated that he was going to carefully review all of the policy decisions and executive orders he’s issued, and that “many revisions will be forthcoming”. He added that most of his executive orders would be rescinded, including his executive amnesty of illegal aliens. “I’ve got a lot to do to try to fix the problems I’ve created during my tenure in the White House.

Asked if he had any regrets President Obama said, “Instead of trying to close GITMO and releasing as many prisoners as I could, I should have expanded the operation there and quickened the pace of trials, finally bringing justice to the terrorists we hold there.” He added, “Far too many of them are still breathing oxygen, and we need to correct that mistake.”

The president ended his press conference with a pledge to “accept responsibility for my mistakes and quit blaming others,” and to “Truly serve this country that has given me so much, and earn the trust of the American people.”

But then again today is April 1st, and Barack Obama’s effort to “fundamentally transform” the United States continues full speed ahead.