Hey John, Why the Long Face ? 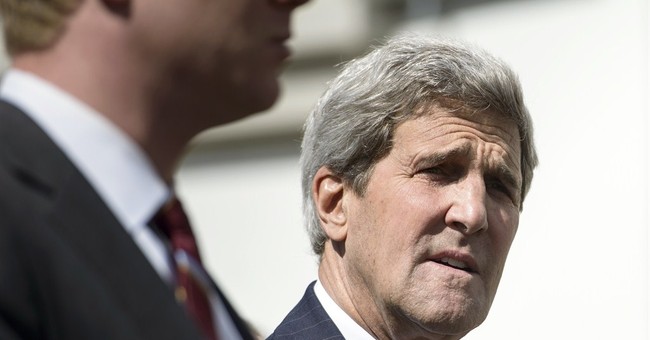 With tomorrow’s deadline rapidly approaching, ‘agreement at all costs’ appears to be the negotiating tactic employed by the United States negotiating team, led by Secretary Kerry.

The Iranians certainly recognize the Obama Administration’s desperation and will exploit to their advantage as much as possible the negotiating weakness on display in Switzerland. Weakness they have also been exploiting in Iraq for the past several months. Or is it American indifference they’ve been exploiting?

Iran considers themselves to hold the upper hand in these negotiations because of the Obama Administration’s seeming anguish over not having a single foreign policy achievement in over six years, and with the Obama presidency coming to an ignoble end in 2016.

First under Secretary of State Hillary Clinton and now under the stewardship of her successor Secretary John Kerry, the Obama State Department hasn’t been able to put together a single diplomatic achievement in over six years.

Negotiators from Iran will squeeze every concession they want to get out of the United States since Secretary of State John Kerry appears completely overmatched by the Iranian negotiators who know the difference between negotiating from a position of strength, and negotiating from a disadvantage of perceived and real weakness as John Kerry surely is.

Americans and Israelis may wake up on Tuesday to find that they’ve been sold out by an Obama Administration so in need of a foreign policy legacy that they have agreed to allow the Islamic Republic of Iran to continue their pursuit of a nuclear weapon unabated.

Though most certainly John Kerry and Barack Obama will try to put a positive spin on the things and claim to have negotiated a tough deal with lots of protections in place to prevent Iranian cheating. Clearly a bunch of hooey.

Iran will smugly walk away from the negotiating table content in knowing that they have once again hoodwinked the Americans, and they will return to Tehran and resume their efforts to develop a weapon to threaten their Gulf neighbors and Israel with, free from the debilitating sanctions that helped stall their progress.

John Kerry and Barack Obama will pat themselves on the back and fire up a celebratory cigar, one of the new Cuban ones they got for also selling out the Cuban people, and then await the Nobel committee’s decision on December 10th.

Unfortunately for Kerry and Obama the Nobel Peace Prize, with the exception of the year 2009 when it was given to Barack Obama for doing absolutely nothing, is normally given for doing something notable to promote peace and stability in the world.

And allowing the Islamic Republic of Iran to continue to work towards the ultimate development of nuclear weapons is a far cry from being a notable achievement in the search for peace.