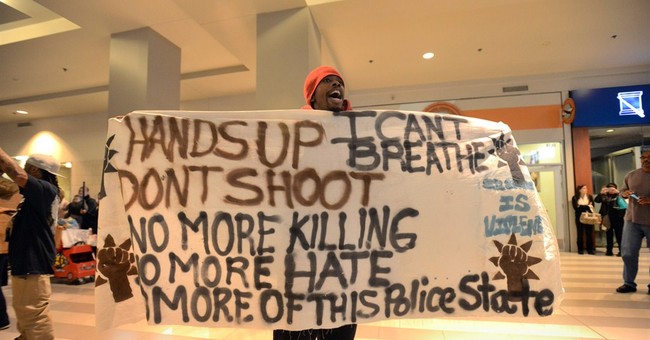 What seems to be completely overlooked and unreported in the news media during all the protest demonstrations and civil unrest taking place in Ferguson and across America, with protesters using the rallying cry of “black lives matter” written on placards and signs carried by protesters, is the equally important fact that ‘black lies also matter’.

We’ve since discovered that much of the unrest around the country has been based on a false and completely fabricated narrative. The “hands up don’t shoot” lie was told by “witnesses” when the black teenager Michael Brown attacked and tried to kill a police officer, during which the officer in defense of his own life was forced to shoot and kill the teen.

That simple canard told by “witnesses” has resulted in millions of dollars in lost property and lost business by Ferguson merchants, and has also resulted in injuries to police officers and other innocent victims. It might even be credited with the loss of some lives.

Regardless of the ultimate costs these lies may seem to be simply that, really nothing more than lies. But the fact of the matter is that those telling the lie may also have committed a crime by Missouri statutes, similar to crimes in most other states that deal with providing the police with false information. A crime for which these “witnesses” have yet to be charged within the State of Missouri. But a crime nonetheless, and a crime that certainly does matter.

Much like all the crimes committed by black lives against white lives that also matter, but that the news media has seemed somewhat reticent in reporting. Could that be because the true crime statistics show a hugely disproportionate amount of black on white crime, as opposed to white on black crime, which doesn’t fit the liberal agenda ?

Even more telling is the fact that the very small number of blacks who are shot and killed by the police just doesn’t fit into the Obama Administration’s narrative. A narrative that’s accepted without question by the Obama-pliant media and the clueless masses, and that is promoted by racists like Al Sharpton and some in the entertainment industry. Which in and of itself is all a lie that matters.

What also matters is that much of what ails the black community are self-inflicted wounds. Problems within the community caused by themselves, and that continue to hold them back from realizing the American dream that many other minorities have been able to achieve.

It may play well on the evening news to show rioting in the streets over some ‘lie’ that has been told to gin up the masses, but the reality is that it does this country no good. Images of police in riot gear launching tear gas at supposedly innocent protesters makes for dramatic newscasts but reflects little of the truth.

The lies have even played out in Washington, D.C. on the floor of Congress with elected representatives wearing hoodies, and throwing their hands up in the air with a great flourish. Accomplishing nothing more than perpetrating a lie on the American people.

Black lies indeed do matter a great deal. They matter because they’ve been emanating from this administration now for over six years and are aimed at “fundamentally transforming” the United States of America.

And the lies need to be called out for what they are. An attempt to place the blame for the failures in the black community on others, instead of recognizing that changing their lives will have to come from within.