Dr. Matthew Ladner is vice president of research for the Goldwater Institute. Prior to joining Goldwater, Ladner was director of state projects at the Alliance for School Choice, where he provided support and resources for state-based school choice efforts. Ladner has written numerous studies on school choice, charter schools and special education reform.

Ladner is a graduate of the University of Texas at Austin and received both a Masters and a Ph.D. in Political Science from the University of Houston. Ladner previously served as director of the Center for Economic Prosperity at the Goldwater Institute and as vice president of policy and communications at Children First America.

The Shape of Things To Come in American Education
June 26, 2008

Fear and Loathing in Carson City: Nevada Should Embrace Charter Schools
May 29, 2008 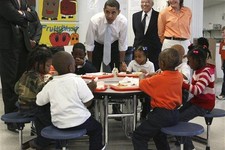 Anywhere But Here: The Looming Train Wreck of No Child Left Behind
March 20, 2008

Charting the Course for Reform
January 10, 2008