DEAR ANTI-HUNTING WIVES: Here’s A Rough Column Just For You 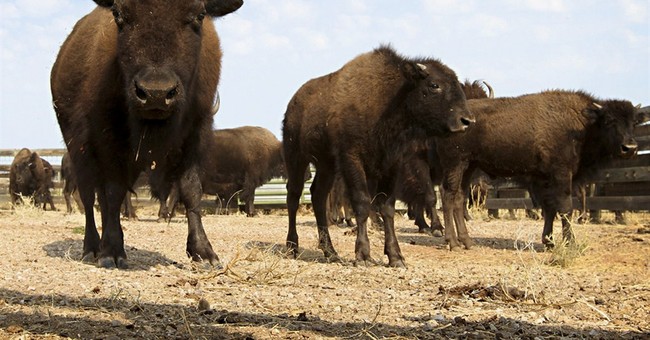 “Honey, can you shoot me a bison?”

I’ll never forget the summer of 2005, when my gorgeous wife walked into my office, while I was cleaning my guns and talking to my two hunting bros about our next adventure, and asked me to hunt a buffalo.

‘We’d get a freezer full of meat and a bison shoulder mount would look beautiful on our walls,” she said.

Let's see… a wife asking her husband, in our paranormal state of aggravated pussification, to go hunting, bank some grub and then have the beast mounted and displayed proudly upon the walls? All I had to say to that unforgettable scenario was … Yahtzee!; and, of course, Thank you, Jesus!

After she asked me to go hunt an American bison she smiled and left. Be still, my beating heart.

My friends sat there gob-smacked… stupefied… that a wife would actually ask her husband to hunt. I know some folks in Texas and Alaska don’t find that odd, but in Miami, and from what I’ve experienced with hunting and couples from around the globe, that was some Twilight Zone stuff.

My single buddy who witnessed this divine event asked if she had an unmarried sister. My married compadre chimed in and said, “Hell would freeze over before my wife would ever ask me to go hunting.”

I can’t lie to you, folks. I felt a combination of blessedness and sorrow: blessed because, hallelujah, I didn’t marry some testicle-snippin’-carpy-wife-from-hell; and sadness because of my single mate’s grim situation of slim-pickedness and my married amigo’s state of hen-peckedness.

Because I hunt and fish a lot, and I write about my pursuits afield, I’ve been blessed to know many professional hunters, guides and outfitters from Alaska to Africa and I’ve been instrumental in hooking people up on epic adventures from boar hunts to cape buffalo hunts and everything in between. I’ve also been on the receiving end of hearing guys who’d like to hunt tell me they can’t go hunting because… wait for it… “Their wife won’t let them.”

“Their wife won’t let them”? What kind of grown man actually says something like that?

Look, I get wives saying, “Honey, I wish you wouldn’t go hunting brown bear in Prince William Sound this spring because you haven’t paid our mortgage in the last four months.”

What I don’t get is a petulant wife hunt-blocking her husband who has paid the bills and has taken care of business; and said chick still throws a fit about his wanting to hunt or fish. To me … that’s bullcrap.

Let me let you highly feminized controlling lasses who’ve watched way too much Desperate Housewives in on something about husbands that we don’t dig; and why you might be single again soon, very soon. Are you ready? Check it out. Here are 11 things husbands hate …

1. When you throw them under the bus in public.

2. When you remind them of their past failures.

3. When you unload on them as soon as they walk in the door.

4. When you expect them to be just like your girlfriend.

5. When you expect them to read your mind.

8. When you compare them to that “perfect guy” at church.

9. When you give them the silent treatment.

11. And when you complain about them going hunting and/or fishing.

Not only do men, who would be men, hate the aforementioned, but also God, according to the Scriptures, is sympathetic to the plight of the husband who is married to a contentious dame.

Proverbs 21:9 -- Better to dwell in a corner of a housetop, than in a house shared with a contentious woman.

Proverbs 21:19-- Better to dwell in the wilderness, than with a contentious and angry woman.

Proverbs 25:24-- It is better to dwell in a corner of a housetop, than in a house shared with a contentious woman.

Proverbs 27:15-- A continual dripping on a very rainy day and a contentious woman are alike.

Ouch. Someone forward those verses to Bruce Jenner, STAT.

Ladies, real men are naturally hard-wired to be hunters. True men are providers, protectors, hunters and heroes. To stymie this is to effectively neuter your dude and keep him from what God made him to be; and diminish him to the realm of the effeminate. Trust me, girls; if and when the crap hits the fan, you don’t want some brow beaten tinkerpot who can’t put meat in the pot should the economy and country go to hell.

Finally, if I was a woman – and I’m not, even though I do like Kate Hudson movies -- I’d thank the good Lord my husband was a hunter. At least he’s not gambling, or going to strip clubs, or banging Rhonda the overly tattooed Hooter’s waitress. At least he’s getting away from the concrete, the mall, the plastic and Facebook and interfacing with God and nature and getting his soul restored. At least he's part of hands-on conservation through hunting; and if he’s a good dad he’s bringing his kids along in this grand pastime of global stewardship; and he’s putting high protein/low fat food on the table versus that chemical-laced, store-bought poison the indoor boys eat.

So, relax, ladies. Bless the hunter/angler husband that you have. Feel a sense of pride that you have an alpha male who can both bring home big dollars and big deer. Surprise him this week and ask him to go hunting and fishing. Sure, initially he’ll think you’re cheating on him and want him out of the house or that you fell and hit your head; but when he sees you lighten up you’ll find the tension die down and that could help your tedious union. And at least you can take pride that you’re not married to a metrosexual.

Oh, and one last ditty for the single dudes… if you hunt or want to hunt and you’re dating some girl that doesn’t like hunting, pick your crap up and run like a banshee chewing leather in the opposite direction. If you don’t, then don’t whine when the anti-hunting chickens come home to roost.

You’re welcome; and you may make the check out to “Doug Giles”.