Finding Religion and God in the Presidential Caucuses and Party Primaries

Donald Lambro
|
Posted: Jan 29, 2016 12:01 AM
Share   Tweet
The opinions expressed by columnists are their own and do not necessarily represent the views of Townhall.com. 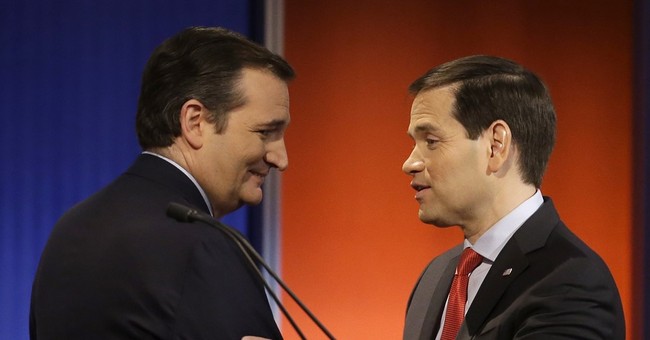 WASHINGTON -- The presidential candidates have been talking about God lately, which is understandable because most of them haven't a prayer of being elected.

Sen. Bernie Sanders, who was raised in the Jewish faith and rarely discusses his religious views, was compelled to talk about it this week as he campaigned in Iowa -- a state heavily populated by evangelical voters who will pick the winner of next week's nominating caucuses.

The Vermont Democrat, who went to Hebrew school in his youth and was bar-mitzvahed, is drawing big crowds in the state, as he does everywhere he goes. But he's now drawing questions about religion because he may become the nation's first Jewish president.

However, the self-described "democratic socialist" says he's "not actively involved with organized religion," although he believes in God, but in a nontraditional way. When he discusses his religious views, he does so within the secular parameters of his belief that socialism is the answer to all of our nation's economic and social ills.

"I think everyone believes in God in their own way," he told The Washington Post. "To me, it means that all of us are connected, all of life is connected, and that we are all tied together."

Last year, when late-night TV host Jimmy Kimmel asked him if he believed in God and whether that even mattered to voters, he seemed reluctant to discuss it at any length.

"I am what I am," Sanders replied. "And what I believe in, and what my spirituality is about, is that we're all in this together."

In an age when Americans are more bitterly divided than ever, at least since the Civil War, and the whole tone of our political debate has turned mean-spirited, who can argue with that?

Other candidates, too, who have not discussed their religion in any depth, are now running around Iowa talking about God "a lot," as one newspaper headline said.

Marco Rubio, a young, talented but untested freshman senator from Florida, who is struggling to lift himself out of third place in the Iowa polls, is one of them.

At one appearance, an Iowa voter asked him: "On your decision-making, will you follow God's word?"

Rubio, a Roman Catholic, embraced the question for all it was worth. He talked of Jesus as "God made man," John the Baptist, and the importance of his religious faith "in everything I do."

In his latest TV ads, he says right off the bat, "I believe in God." In an earlier ad, titled "Faith," he says, "Our goal is eternity, the ability to live alongside our creator for all time. To accept the free gift of salvation offered to us by Jesus Christ."

The Pew Research Center released a poll Wednesday that asked voters whether religion was an important factor in choosing a president.

In a 2007 Pew poll, 63 percent of voters said that they were less likely to vote for a presidential candidate who did not believe in God. That number has since shrunk to 51 percent, though the decline came mostly from Democrats.

But Republican front-runner Donald Trump isn't seen as especially religious by voters, the Pew poll found. In fact, he was seen as the least religious of all the candidates.

Even so, the poll showed that he draws strong support from religiously observant voters anyway. Sixty-one percent of Republicans and GOP-leaning independents who think it is important for a president to have strong religious beliefs say they believe Trump would be a good or even great president.

That is compared with 46 percent of GOP voters who said a presidential candidate's religious faith wasn't as important to them.

But the Trump campaign isn't taking any chances. On Tuesday, the day before the Pew poll came out, Jerry Falwell Jr. -- son of Jerry Falwell, who founded the Moral Majority and Liberty University -- endorsed the billionaire businessman.

Falwell's endorsement came just a few days after Robert Jeffress, pastor of the 12,000-member First Baptist Church in Dallas, said he was "absolutely convinced that Donald Trump would make a great president."

It was the latest and most powerful signal yet of Trump's growing appeal among evangelical voters, undercutting his chief rival in Iowa, Texas Sen. Ted Cruz, days before Iowans prepare to cast their votes.

While Trump is a Presbyterian, he is not known to be an active member in any congregation, and he has been caught making embarrassing remarks that suggest he isn't very religious at all. And he has sometimes switched his positions on issues important to religious voters.

He has described taking Holy Communion by saying, "I drink my little wine ... and have my little cracker." And at a recent visit to Liberty University, he cited "Two Corinthians" instead of "Second Corinthians."

Cruz released an ad this week containing a 1999 Trump interview with the late "Meet the Press" host Tim Russert in which Trump says, "I am pro-choice in every respect."

Religion is still critically important in America's political life, especially in the midst of the advancing moral decay and coarseness of our culture.

In a column I wrote many years ago about the school prayer issue, I described how the House and Senate open each day with a prayer, as members stand by their desks, bow their heads and listen to the chaplain.

A Senate chaplain was once asked in an interview, "Do you pray for the senators?"

"Well," he replied, "I look at the senators before me, and then I pray for our country."