What's America's Biggest Threat? Nearly 70% of US Say it's the Government

Donald Lambro
|
Posted: Jan 06, 2016 12:01 AM
Share   Tweet
The opinions expressed by columnists are their own and do not necessarily represent the views of Townhall.com. 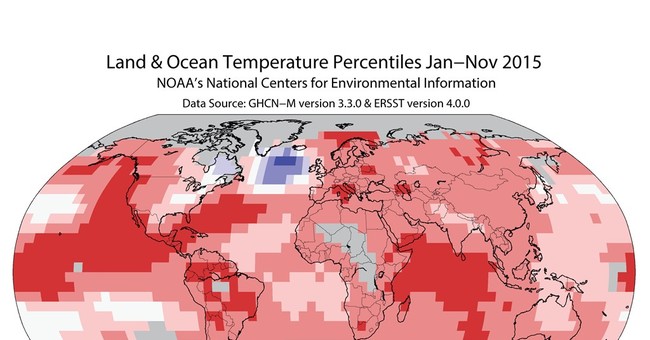 Barack Obama wants us to believe that the biggest issue facing our country today is gun control or global warming. Some of the GOP presidential candidates say it's illegal immigrants who threaten us. Hillary Clinton and Bernie Sanders think it's big business and the top one percent.

But when the Gallup Poll asked Americans last month to name the "biggest threat to the U.S.," illegal immigrants were way down on the list of concerns. So were the other issues the candidates are focusing on, many which barely get mentioned by ordinary Americans.

"For the second consecutive year, dissatisfaction with government edged out the economy as the problem more Americans identified as the nation's top problem in 2015," the Gallup Poll reported this week.

"According to Gallup's monthly measure of the most important problem facing the U.S., an average of 16% of Americans in 2015 mentioned some aspect of government -- including President Barack Obama, Congress or political conflict, as the country's chief problem," write's Gallup's analyst Lydia Saad.

"The economy came in [a close] second with 13 percent mentioning it, while unemployment and immigration tied for third at 8 %," she said.

"Rounding out the top 10 were a constellation of problems each averaging 5%, including ethical/moral decline, race relations/racism, terrorism, the federal budget deficit or debt and education."

But when Gallup asked Americans what troubles them most and is the chief threat to our way of life, one issue is head and shoulders above all the others: the government. Wasteful, woefully incompetent, bickering, ineffective.

When asked to choose between big government, big labor and big business, 69 % of those who were surveyed overwhelmingly named big government as the "biggest threat to America's future."

I don't know about you, but I'm not hearing the GOP candidates raising this issue to the high level that so many Americans believe is our greatest threat.

We're certainly not hearing Hillary Clinton or Sanders warning about big government. They're proposing a long laundry list of programs and agencies to make it bigger and a lot costlier than the $4 trillion a year it costs us now.

Where was gun control, the issue that Obama has made his chief concern in the last year of his presidency?

It was 19th on the list of the major concerns, showing how out of touch he is with the rest of the country.

In earlier decades, a much larger segment of Americans said big labor or big business were a bigger threat. That's changed dramatically in recent decades, particularly in the Age of Obama and seven years of weak economic growth, a sharply declining work force, and fewer full-time, good paying jobs.

"By 2000, the percentage naming big government rose to 65 percent, as mentions of big labor fell into the single digits," says Gallup's Rebecca Riffkin in an analysis titled "Big Government Still Named as Biggest Threat to U.S."

It will come as no surprise to anyone that Republicans are worried far more about the growth of big government than Democrats and independents.

Nearly nine out of 10 Republicans say big government  is the biggest threat, but 67 percent of independents and 53 percent of Democrats say so, too.

In other words, this is a major political issue that cuts deeply across party lines. It is the reason why Republicans control both the House and Senate by hefty margins, and one of the reasons why Obama's job approval polls have been stuck in the mid-to-upper 40 percent range over the course of his presidency.

This week, in yet another Constitutionally dubious end-run around Congress, Obama announced another series of executive actions -- this time, aimed at broadening the government's regulation of firearms.

"Even when mentions of terrorism, immigration and gun laws briefly flared, the percentages citing these stayed below the 20 percent threshold," Gallup said.

The American people know what the important issues are in our country and they are listed in the order of their importance in Gallup's latest polling results.

They are, first and foremost, dissatisfaction with their government, followed by unhappiness and frustration with the Obama economy and unemployment, with immigration barely clinging to the "top four" list with 8 percent.

Hillary Clinton, who apparently doesn't read the Gallup polls, is furiously campaigning around the country, trying to convince voters that the economy does better under the Democrats than it would with a Republican in the White House.

University of Maryland business economist Peter Morici not only says "that is simply false," he provides statistics to  prove it.

"The best apples-to-apples comparison is between the rather difficult conditions Presidents Reagan and Obama inherited" and how "the fortunes of America's families then progressed," he writes.

"Through the first 25 quarters of Obama's recovery, the gross domestic product (GDP) has averaged 2.2 percent, whereas during the comparable period for Reagan, GDP advanced at a 4.6 percent annual pace."

Today, a debt-ridden government and the economy are once again the nation's two biggest concerns, and Clinton wants to double-down on Obama's economic policies.

Time for a change, wouldn't you say?