Putin Playing a Deceitful Game to Prop Up Assad 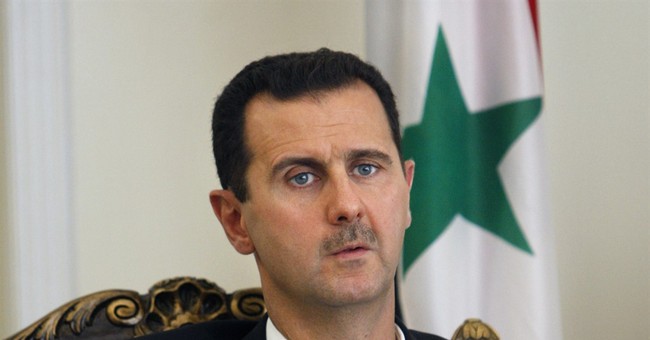 Russia's daring entry into the Syrian war is Vladimir Putin's riskiest move yet to challenge the West, especially President Obama, after he got away with murder in eastern Ukraine.

After Obama and Putin sat down together earlier this week at the United Nations to negotiate their differences and size each other up, Vlad the Impaler flew home and promptly sent war planes into Syria to prop up President Bashar al-Assad.

Putin sized Obama up alright, as he did when he seized the Crimean Peninsula in March 2014 and sent troops into eastern Ukraine to gobble up even more territory, with little more than a sanctions slap on the wrist.

Ukrainean leaders pleaded for arms assistance from the U.S. to repel Putin's incursion. But their pleas fell on deaf ears, as congressional critics, including Arizona Sen. John McCain, warned that unless we helped Kiev, it would only embolden Moscow's war-making habits

On Wednesday, Russia launched airstrikes in Syria in support of the Assad dictatorship and against rebel forces seeking to topple him. Or so Putin claimed.

But this is an administration that seems used to being blindsided. In Ukraine and across the Middle East when Obama was telling voters in 2012 that he had al Qaeda and other terrorists armies "on the run" and their forces were "decimated." Yeah, sure.

Then came the Islamic State, ISIS and ISIL, who swept across the region and into North Africa. And now a new and more dangerous threat: Russia in Syria.

It was another embarrassing example of naiveté across the administration's entire national security front, including secretary of State John Kerry, when they learned Russia's statements weren't worth the paper they were printed on.

Kerry seemed truly surprised Wednesday when he told Russian Foreign Minister Sergei Lavrov that the air strikes ran counter to Moscow's stated intention to cooperate on "deconfliction" to avoid collisions in the air.

But Putin's spokesman, Dmitry Peskov, was playing his latest cat and mouse game as deviously as ever, saying that Russia's parliament had approved the use of force in Syria. That was another surprise

"Russia will factually be the only country to carry out this operation on the legitimate basis of the request of the legitimate government of Syria," Peskov said

On Wednesday, Putin casually dismissed any Western criticism, imperialistically saying other countries could "get involved" in Syria, but under Russian leadership. Sure

The Russians claimed that the air strikes were targeted only on Islamic State militants, a command center and their ammunition depots. But U.S. officials aren't buy this, as new intelligence suggests that the Russians appear to be attacking Syrian rebels who are fighting Assad's forces to topple him from power.

As of this week, the administration was signaling that it will expand its air strikes, something it was reluctant to do earlier when they were needed most.

But right now, Putin has seized the initiative under the guise of fighting the terrorists, while undertaking a major military offensive to defeat the democratic forces seeking to overthrow Assad

What does this mean for the Obama administration and his party in the forthcoming presidential election?

First and foremost, we can say with great assurance that Obama's hope of "resetting" peaceful relations with Russia has been a dangerously, naive dream that makes his administration look hopelessly incompetent and foolish here at home and increasingly impotent abroad.

As things stand now, Putin has Russian troops fighting alongside well-armed rebels in eastern Ukraine with the intention of eventually annexing the whole country.

He dreams of seizing other parts of the former Soviet Union, one country at a time.

Remember when Russian troops went into Georgia in 2008 and bombed its capital?

Now Putin is look beyond his region to the Middle East in pursuit of reinventing himself into a heavyweight, global player.

"While Russia has supplied arms to Assad for years, direct intervention seemed unlikely until early this month when Russian aircraft, tanks and troops were spotted in Syria," the Post reports. No doubt used to deliver chemical weapons and "barrel bombs" on Syria's civilian population.

There are those who say that his latest intervention in Syria is an attempt to distract attention from his Crimean
invasion and seizure and his prolonged war with Kiev.

From time to time he has attempted to reinvent himself as a dealmaker, telling reporters in Moscow that he hoped Assad would be open to some "compromise" to end the rebel insurgency.

"I know that President Assad understands that and is ready for such a process. We hope that he will be active and flexible and ready to compromise in the name of his country and his people," Putin told reporters, according to Reuters news agency.

If you believe that, I've got a Russian babushka the size of Siberia that I can sell you cheap.