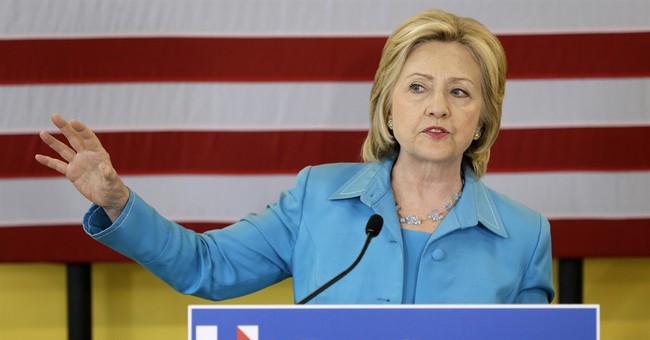 WASHINGTON - Hillary Clinton's long-planned rollout of her first major economic proposal was shoved aside last week by a widening investigation into whether her e-mail account compromised classified information.

While Clinton was announcing her plan to raise capital gains taxes on investors, the Justice Department said it had received new disclosures that some of her private e-mails were responsible for doing just that.

That story ran on the front page of the Washington Post under this headline: "Justice Dept. gets involved in Clinton e-mail saga." Clinton's proposed tax hike story was pushed inside the paper.

Not long after Clinton insisted she had broken no rules by conducting her official business at the State Department on a private, e-mail account, the Justice Department announced Friday it had received a "referral" from the inspector general of the intelligence agencies.

The nation's chief law enforcement agency was told by the IG, I. Charles McCullough, that four of the e-mails, out of the 40 that were reviewed, contained information that should have been stamped "classified."

As required under federal law, McCullough alerted the Federal Bureau of Investigation of his findings.

"The main purpose of the referral was to notify security officials that classified information may exist on at least one private server and thumb drive that are not in the government's possession," McCullough said in a statement that was also signed by Steve A. Linick who is the State Department's inspector general.

The story first broke last week when The New York Times reported that "two inspectors general have asked the Justice Department to open a criminal investigation" into whether Clinton's e-mails contained classified information.

Clinton has maintained from the beginning, after her privately-held e-mail account was first disclosed, that she had abided by all the rules. And that she did nothing wrong.

But questions have been raised about using an e-mail system outside of the government's control, and the risks of classified information being released into the wrong hands.

Clinton has said that she turned over 55,000 e-mails to the State Department, after she removed and erased ones she deemed to be "personal." That raised questions about how verifiable the remaining e-mails will be since they've been since they've been beyond the government's reach.

One of the people waiting to get his hands on them is GOP Rep. Trey Gowdy of South Carolina, who chairs the House Select Committee on Benghazi -- that panel that is investigating the terrorist attacks on the U.S. consulate where four Americans were killed, including Ambassador J. Christopher Stevens.

Gowdy wants to know how Clinton handled the attacks at the time when top department officials initially described the event as a public protest that just got out of hand. And why the department did not respond to Stevens' frequent pleas for increased security.

He thinks that some of the answers to these and other questions may be in Clinton's e-mails.

In a statement released last week, Gowdy said "the only way" to resolve issues surrounding her private e-mail account was to have her e-mail server "voluntarily relinquished or acquired by other lawful means" to undergo a thorough "forensic examination."

Right now, it's still unclear whether Gowdy will get his hands on the e-mails any time soon, and how many others will review them before they reach Capitol Hill.

In a memo to Congress, McCullough said the State Department accepted his proposal that senior intelligence officials become part of the review process.

But he said that a request that State turn over a copy of all the e-mails to intelligence officials was "rejected on jurisdictional grounds."

It is hard to tell how many people will review Clinton's e-mails before the House Select Committee on Benghazi get their hands on them. And how many of them have been scrubbed.

What seems clear at this point is that Hillary's e-mail scandal has hurt her politically, reminding people of her obsessive secrecy, and sharply driving her polls down.

In the past week, she has repeatedly said that she has done nothing wrong, broken no rules or laws, and will answer any and all questions when she testifies before Congress. But her polling numbers suggest that fewer voters believe or trust her.

A recent CNN/ORC poll found that 57 percent of adults do not think she is honest or trustworthy. An AP/Gfk poll says a mere 31 percent of likely voters believe the word "honest" accurately describes her.

The findings of an NBC/Marist poll released Sunday, similar to last week's Quinnipiac University poll, showed her to be as unpopular as Donald Trump in pivotal swing states.

In a Gallup Poll released last week, Clinton's favorable rating "has slipped to 43 percent from 48 percent in April. At the same time, Clinton's unfavorable rating increased to 46 percent, tilting her image negative and producing her worst net favorable score since December 2007."

Meantime, Gallup says Vermont Sen. Bernie Sanders' favorable rating among Americans "has doubled since Gallup's initial reading in March, rising to 24 percent from 12 percent as he has become better known."

But it is only going to get worse for Clinton on a number of fronts as she heads toward the 2016 election year.

As the intelligence agencies closely review her e-mails, they could well find others that contain sensitive, classified material.

Her economic plan landed with a thud last week, not a good sign in an election where the economy is job one.

But wait until the voters understand that her economic flim-flam plan is an exact copy of Barack Obama's failed, big spending, tax-the-job creators agenda. We've lived through that one before. We don't want to go through it again.